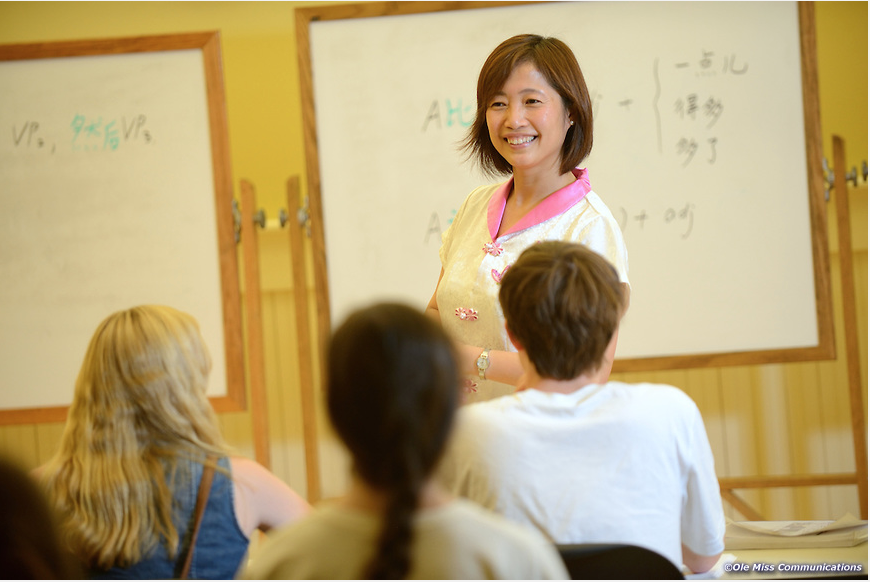 “The Language Flagship began as a small pilot project to challenge a few U.S. universities to build programs of advanced language education,” said Donald Dyer, UM chair and professor of modern languages. “Being one of The Language Flagship’s Chinese programs means this is a program designed to take students to the superior level of Chinese, a program on steroids.”

UM is among a dozen institutions offering the intensive program, and the university’s success in preparing its students for careers involving Chinese language and culture attracts students from across the country.

“Ole Miss has one of the most effective Chinese programs in the country, which is why I chose to come here in the first place,” said Liana Tai, a senior international studies and Chinese major from Arlington, Virginia.

Flagship programs are results-driven. One factor used to determine just how good a program is involves examining how many students it can send to the Flagship Capstone. To participate, students must fulfill all required courses, apply, pass all qualifying tests and be accepted by the Flagship Chinese Council.

“For the past two years, the University of Mississippi has had the largest group among the 12 Chinese Flagship Capstone Programs,” said Henrietta Yang, Croft associate professor of Chinese and co-director of the program.

“During the selection process, all students were ranked based on their application packages, which included a personal statement, a Chinese writing sample, a Chinese speech sample, transcripts, three recommendation letters and a Chinese resume. Three of the top five selected and admitted were UM students, and eight of 13 were ranked above 30.”

The Ole Miss CLFP also is the only Chinese Flagship program that operates an intensive domestic summer program before the freshman year and a post-freshman summer program at Shanghai University in China. This program aims to raise students’ linguistic proficiency and cultural knowledge considerably within an eight-week period.

The university’s CLFP Shanghai Program is open to take students from the other 11 flagship programs.

“Establishing our Shanghai program, which is very well-respected and replete with high standards, is another huge success that is very rewarding to me,” Yang said.

Since taking over the program in 2013, Yang has redesigned the curriculum, which has high standards, thematic courses, domain mentoring and cultural preparation. Unlike some Chinese Flagship programs around the country, which offer only upper-level courses, the Ole Miss CLFP allows for entry at various skill levels.

The university also boasts one of the finest language teaching teams in the nation. Joining Yang are two assistant professors and three full-time instructors. Approximately 100 alumni of the program have gone on to successful careers in international business, public policy leadership, medicine and politics, to name a few fields.

Instruction extends far beyond the borders of the Oxford campus.

“We have seeded Chinese instruction at Oxford, Lafayette and Holly Springs high schools,” Dyer said. “More than 10 students from OHS have matriculated into our flagship program. Students come here from all over the country to study Chinese at a high level.”

Students enrolled in the program are singing their praises of the professors’ instruction and the valuable learning opportunities being received.

Prospective job opportunities in the international business arena are what drew Conner Clark, an international studies and Chinese major, to the UM Chinese Flagship program. The senior from Dallas also participated in the Capstone Year Program.

“During the first semester, we were direct-enrolled at Nanjing University,” Clark said. “For the second semester, we applied to whichever organizations that we were interested in and completed a full-time internship for a minimum of 16 consecutive weeks. This second semester was the most fulfilling for me.”

James DeMarshall, a junior Chinese and international studies double major with a minor in mathematics, said he knew that the UM program would make him proficient in the language.

“The culture of this program is infectious,” said the native of Glassboro, New Jersey. “Everyone is very supportive of each other, almost like a big family. When I visited campus and sat in on classes, I knew I wanted to be part of this special atmosphere the flagship program has cultivated here.”

Having studied consecutive summers in Shanghai and Harbin, DeMarshall recently learned he was awarded a U.S. Department of State’s Critical Language Scholarship to spend this upcoming summer studying in the city of Xi’an, in China’s Shaanxi province. He is also the incoming president for the UM chapter of a nonprofit, nonpartisan organization called Global China Connection, of which the Chinese Language Flagship Program has been very supportive.

“I recently had the opportunity to travel to New York City to participate in a conference for GCC, and I was one of maybe 10 or 15 non-Chinese people in attendance,” he said. “As the event went on, I realized how far my Chinese had come in such a really short period of time spent here at UM.

“I was able to comfortably function in Chinese, which made it easier for me to network and connect with all the other young professionals in attendance. In essence, there was no language barrier. I can entirely thank the UM Flagship Program for that capability.”

As a result of the Chinese program’s success, the department applied for an Arabic flagship program in 2015. Although the request was not granted, the university’s Arabic program is good enough to achieve flagship status, Dyer said.

“Our Arabic program is also exceptional, modeled after Chinese, and reaching the same level of productivity and success,” he said.

Meanwhile, Yang is anticipating even greater levels of success for the Chinese program.

“We are preparing for as many as 19 students for Capstone next year,” she said. “Ours has dominated among the 12 Chinese Flagship Programs in the past two years. I would have to agree that UM has the best Chinese Flagship program in the country.”