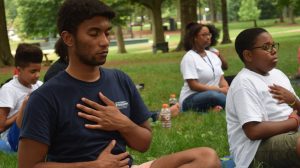 Terrius Harris and Albert Ball learn yoga in the Grove.

Twelve high school students from across Mississippi gained exposure to innovative problem-solving skills by participating in an entrepreneurial leadership program at the University of Mississippi.

The inaugural class of the McLean Entrepreneurial Leadership Program, or MELP, met May 29-June 3 on the Oxford campus. The weeklong series of activities was sponsored by UM’s McLean Institute for Public Service and Community Engagement in partnership with the Office of Pre-College Programs.

Terrius Harris and Ryan Snow, innovation scholars with the McLean Institute’s Catalyzing Entrepreneurship and Economic Development initiative, were instrumental in planning and facilitating the program.

“In this first summer, we sought to introduce an initial cohort of students from around the state to the entrepreneurial approaches to addressing pressing community needs,” said Albert Nylander, director of the McLean Institute and a professor of sociology.

“Our initial assessment indicates that at the beginning of the week, only one student believed that he or she could become an entrepreneur. By week’s end, the overwhelming majority of participants believed they had the potential to become entrepreneurs.”

MELP was structured to cultivate an innovative approach to solving problems that students identified in their communities. Throughout the week, participants studied principles of entrepreneurship, data and demographics, environmental sustainability, and health and wellness through readings, lectures from UM faculty and staff, and field trips to meet with community leaders.

Snow, of Summerville, South Carolina, and Harris, of Eagle River, Alaska, reflected on their experiences planning and leading the program.

“I am excited to see this program develop into a statewide initiative,” Snow said. “As I begin my next phase of involvement with the McLean Institute as a graduate innovation fellow, I intend to continue the work of MELP by working with the students to implement the projects they planned during the program.”

Working with students in the inaugural MELP program has been rewarding, Harris said.

“This program attracted high-caliber high school students from across Mississippi,” he said. “I believe we’re off to a great start and on the verge of something truly significant for our state’s economic growth and community development.”

MELP’s first-year goal was to pilot a scalable and replicable program that will stimulate an entrepreneurial interest among high school students that can be utilized to solve community and state problems through community engagement.

“With entrepreneurial problem-solving as the central focus of the week, students were required to complete a weeklong project with the goal of generating an actionable plan to address a community challenge,” said Zack Grossenbacher, another innovation fellow in the McLean Institute. “This project was developed in conjunction with faculty and community members with the intention of allowing students to actively practice the skills that they acquired throughout the week.”

The inaugural participants were Albert Ball and Ajene Buchanan, both of Oxford; Dylan Dickerson, Kyarria “Ari” Hardy, Tyteanna Wragg, Hailey Fox, Kendall Dawkins, Mister Clemmones and McKinley Ware, all of Newton; Abidemi “Titi” Ayegbaroju and Jimeya Mayes, both of Greenwood; and Baylea Brown of Magee. All enter the 10th, 11th or 12th grade in the fall.

Several of the students weighed in on their expectations versus their experiences. Ayegbarojou said she had a particularly emotional moment during a session at the Robert C. Khayat Law Center.

“They asked us to share what we value the most, and I discovered what I value most is myself,” the Greenwood High School sophomore said. “I also found out that in order to be a good leader, you must first be a good follower. And that you must have no fear of failure in order to succeed.”

Brown said she thought she’d feel disconnected and isolated from the others during the week.

“Instead, I found we all made a great connection and learned how well we can communicate,” said the junior from Magee High School. “By sharing like we did, we each built one another up.”

Dickerson, a sophomore at Newton High School, said he was expecting “a bunch of boring meetings.”

“But, that’s not what happened at all,” he said. “Everything and everyone has been wonderful. I hope we all get to return if they do this again next year.”

As followup, the McLean Institute conducted exit interviews and had students fill out surveys to evaluate the program. When asked to define the term “entrepreneurship,” one student responded with “having the courage to speak up about a problem and make a plan to fix it and follow through with your plan.”

The goal of MELP was to bring about this type of inspired and innovative thinking, said J.R. Love, project manager for the Catalyzing Entrepreneurship and Economic Development initiative.

“Thanks to our CEED students, program partners and the students who joined us this week, we have come together to learn from one another and join forces to address pressing social and economic problems in Mississippi,” Love said. “I am optimistic that we can expand this program in the future and develop a network of partnerships across the state that will impact quality of life in Mississippi.”

Besides support from the Office of Pre-College Programs, other MELP partners included the Center for Population Studies, Office of Sustainability, RebelWell, the UM Food Bank, Square Books in Oxford and Home Place Pastures in Como.

To learn more about the McLean Institute, visit http://mclean.olemiss.edu.