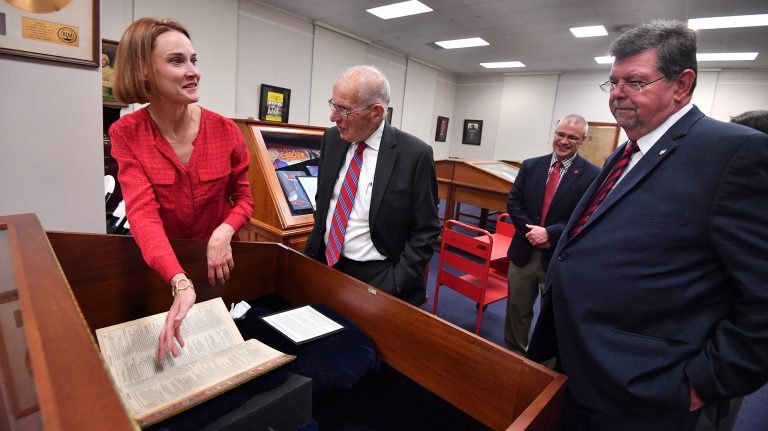 Thanks to a gift from the Gertrude C. Ford Foundation, the university has acquired a rare volume of William Shakespeare’s Second Folio, making it a permanent part of the university’s collection. It is on display in the Department of Archives and Special Collections in the University of Mississippi’s J.D. Williams Library.

The Second Folio, published in 1632, is an updated version of Shakespeare’s First Folio. The First Folio is a collection of 36 plays published in 1623, and 18 of those plays were previously unpublished, including “Macbeth,” “Julius Caesar” and “Twelfth Night.”

This rare copy belonged to Edwin Booth, one of history’s most illustrious Shakespearean actors. His brother was John Wilkes Booth, who assassinated President Abraham Lincoln.

“This copy of the Second Folio, owned by one of history’s foremost Shakespearean actors, is a tremendous acquisition,” Ford said. “It will be an enduring resource for the entire university, as well as the general public.”

Edwin Booth was known for a more textually accurate use of Shakespeare’s works in his theatrical performances, a practice which was unusual for the 19th century. It is likely the actor consulted this volume in preparation for his lauded portrayals of characters such as Hamlet, historians say.

The Second Folio was purchased from the collections of New York’s Players Club, a social group for actors founded by Booth, which had engaged the auction house Sotheby’s to negotiate on its behalf. The book, purchased with a $150,000 donation from the Ford Foundation, had an original estimate between $300,000 and $500,000.

Justice-Malloy notified Pulliam that the copy was going to auction while visiting the Players Club in December.

“I am overjoyed that the University of Mississippi will now be a resource for theatre researchers nationwide,” Pulliam said. “This fulfills a vision of Dr. Rhona Justice-Malloy and myself.”

Pulliam and Justice-Malloy put together literature and images to begin the fundraising process to purchase the book. In January, Wilkin contacted Pulliam with news that the Ford Foundation would be a major donor and the acquisition would move forward.

“They were excited about the idea of it being at a public institution where someone would really be able to enjoy it,” Justice-Malloy said. “I am so proud to be a faculty member at Ole Miss and know that they value the importance of such a book.”

The folio will be valuable to help recruit students and scholars interested in the arts, history and literature research, Justice-Malloy said.

“It’s a big deal to be able to say we have not only the Second Folio but Edwin Booth’s copy,” she said. “It will be a point of pride for us, and scholars and students can actually use this. I would like to extend an enormous ‘thank you’ to the Ford Foundation for making this possible.”