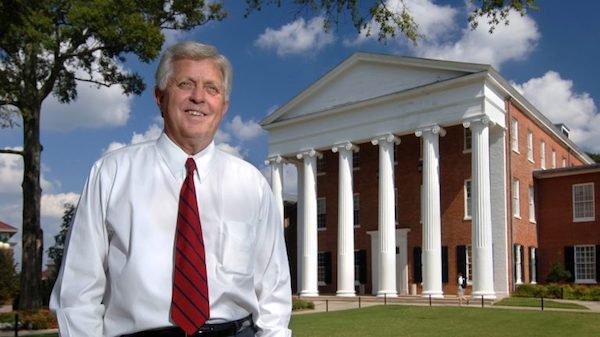 Khayat received the 2017 Mississippi Association of Partners in Education Winter-Reed Partnership Award during a tribute luncheon at the Hilton of Jackson. MAPE established the award in 2007 to honor former Gov. William Winter and the late Tupelo businessman Jack Reed Sr. for their lifelong contributions to public education and to provide continuing recognition for Mississippi’s outstanding education leaders.

The former chancellor said the honor is special to him because he greatly admires the award’s namesakes.

“When a chancellor or any other university employee receives recognition, it is being received really on behalf of the entire university because of contributions the university makes to the lives of our students and to the public,” Khayat said. “Knowing Mr. Reed through the years and knowing Gov. Winter all these years, I know what remarkably generous men they were to continue giving so much of their lives to public service. This is a tremendous honor.”

“Robert’s exceptional leadership laid the foundation for where we are today and our continued focus on excellence across all aspects of the university,” Vitter said. “We are all indebted to him, and I am especially appreciative that, since my arrival, he has been a true friend and mentor to me.”

MAPE was designated as a 501(c)(3) nonprofit organization in 1994 and is committed solely to providing training and resources to help build local support for the success of all students. 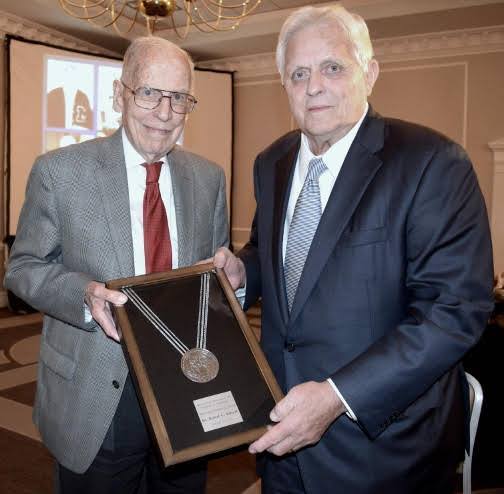 A friend of both men, Khayat said he always respected them because Winter, a Democrat, and Reed, a Republican, worked together to make improvements to the state. They were lifelong partners for public education, and the chancellor admired their steadfast conviction to improve Mississippi’s schools.

“From the beginning, they supported education and did it dramatically,” Khayat said. “When things were difficult, they didn’t waver from their belief that public education was the key to Mississippi’s future and that if we were going to be prosperous as a state, and have a higher quality of life, we would have to have an educated populace.

“We will forever be indebted to them for their efforts.”

Khayat served as UM chancellor from 1995 until his retirement in 2009 and has established a legacy of leadership in numerous fields throughout his distinguished career, including academics, law, sports and higher education.

He is credited with leading efforts to increasing UM’s enrollment by 43 percent and bringing more than $100 million in research and development grants to the university. He arranged for a $5.4 million gift from Jim and Sally Barksdale to establish an honors college as one of his first acts as chancellor.

He also secured a chapter of Phi Beta Kappa honor society at Ole Miss. In 2008, he helped bring a presidential debate to the campus.

His book “The Education of a Lifetime” won a Silver IPPY award in 2013 for best memoir in the nation.

The 1956 Moss Point High School graduate excelled as an undergraduate history major at Ole Miss, where he was an Academic All-American football player and All-SEC catcher for the 1959 and 1960 SEC Champion baseball teams.

He earned undergraduate and law degrees from the university. He joined the law faculty in 1969, and a Sterling Fellowship enabled him to pursue a degree from the Yale Law School in 1980.

He holds an honorary membership from Phi Beta Kappa and was selected as Law Alumnus of the Year in 2014.

He is a member of the Ole Miss Football Team of the Century, the Mississippi Sports Hall of Fame and the Student Hall of Fame at Ole Miss. He also is the recipient of the Lifetime Achievement Award from the NFL, the Distinguished American Award from the National Football Foundation, and the 2017 Dick Enberg Award presented by the College Sports Information Directors of America.

MAPE President Phil Hardwick said one of the attributes of a real leader is the courage to change things that need to be changed, especially in the world of education. Khayat embodies these attributes, he said.

“Robert Khayat showed genuine transformational leadership as chancellor of Ole Miss at a time when others would have preferred the status quo,” Hardwick said. “His memoir, ‘The Education of a Lifetime,’ should be required reading not only for educators but for anyone in a leadership position. He truly exhibits the spirit of the Winter-Reed Award.”

Sponsorship opportunities for the Winter-Reed Partnership Award are available by contacting MAPE at 601-573-0896 or visiting http://www.mapie.org. Individual tickets for the awards banquet are $75 and may be purchased online at http://www.mapie.org or from MAPE, P.O. Box 2803, Madison, MS 39130.