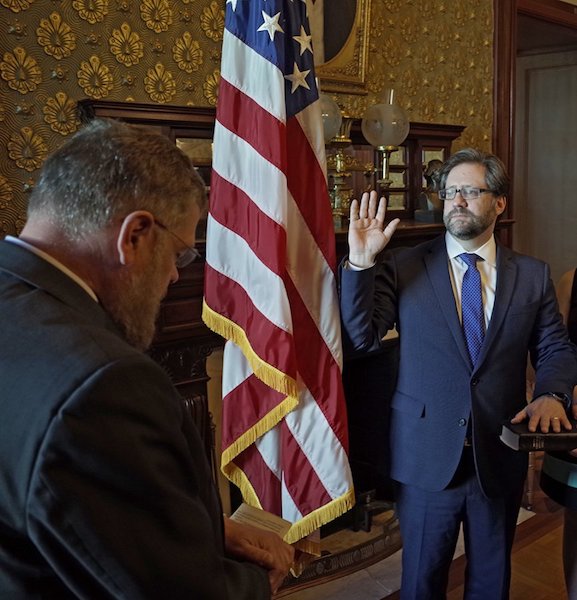 Jon Parrish Peede (MA Southern Studies ’93) was sworn in today as the 11th chair of the National Endowment for the Humanities (NEH) at a ceremony at the White House.

“It is a distinct honor to be nominated by President Donald J. Trump and confirmed by the US Senate to serve as Chairman of the National Endowment for the Humanities,” said Jon Parrish Peede. “I particularly value this vote of bipartisan support and will work with my NEH colleagues to ensure that all Americans have access to our country’s cultural resources.”

Founded in 1965, NEH is an independent grant-making institution of the United States government dedicated to supporting research, education, preservation, and public programs in the humanities.

Peede joined NEH in April 2017 and most recently served as the agency’s senior deputy chair. Under his leadership NEH has created a new category of grants to support infrastructure and capacity-building at humanities institutions, issued emergency grants for cultural organizations affected by Hurricanes Harvey, Irma, and Maria, expanded its grant offerings for museum exhibitions, and formed new partnerships with Blue Star Families and the First Nations Development Institute for reading and discussion initiatives for military families and the revitalization of Native American languages.

He is the coeditor of Inside the Church of Flannery O’Connor: Sacrament, Sacramental, and the Sacred in Her Fiction (Mercer, 2007) and editor of a bilingual anthology of contemporary American fiction (Lo que cuenta el vecino: cuentos contemporáneos de los Estados Unidos [UNUM: Mexico City, 2008].) He has published widely in newspapers, magazines, academic journals, books, and encyclopedias. As a speechwriter, he has written for a U.S. President, First Lady, and Librarian of Congress.

Jon Parrish Peede was born and raised in Mississippi and lives in Virginia with his family.