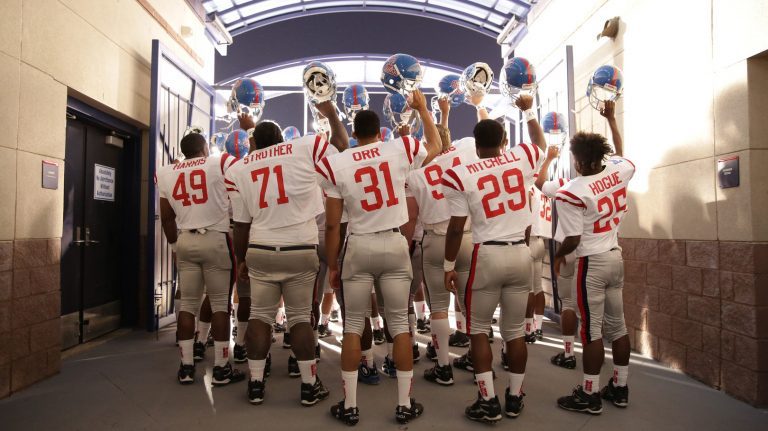 The 2020 Oxford Film Festival, which begins March 18, will host the world premiere of “It’s Time,” the story of Ole Miss football player Chucky Mullins, and screenings of 222 films and more than 100 other events over five days.

Melanie Addington, executive director of the Oxford Film Festival, prepares year-round for the event. OFF brings the Oxford and University of Mississippi communities together to showcase artists and filmmakers and offers a chance for the community to engage with them.

“It is a huge community event that nets about 8,000 to 10,000 people coming to Oxford for the week,” Addington said. “We’ve spent seven months watching over 2,500 films to prepare.”

“It’s Time” tells the dramatic story of Chucky Mullins, a defensive back during the 1989 Ole Miss football season. He was left paralyzed after a head-on tackle of Brad Gaines, a Vanderbilt Commodores player. Mullins later died from a pulmonary embolism, but he inspired many with his positive attitude and determination.

The film screening will celebrate Mullins’ family and pay tribute to those who have already received the Chucky Mullins scholarship at UM and were elected to wear the number 38 jersey during an Ole Miss football season.

Lynne Millette and her husband, Sam, who are both Ole Miss alumni, are among the executive producers of “It’s Time.” They knew they had to be involved in the production of the film when they got the call from Gaines. She believes this premiere will remind the Ole Miss and Oxford community of true humanity and love.

The film, she said, tells the story of how faith and brotherly love between a black and a white football player were created through the tragedy.

“Chucky was a beloved member of the Ole Miss football team who played with all his heart, and his legacy continues 30 years later,” Millette said. “He embodies all that is loved about the Ole Miss family.

“This will be wonderful publicity for the university, and it is something that all of the Ole Miss family will be proud of.”

The premiere, which is set for 7:30 p.m. March 18 in the Gertrude C. Ford Center for the Performing Arts, also benefits the Chucky Mullins Scholarship Foundation. Before the film begins, a Q&A will be hosted by Frank Waldeck, director of the film; Sedale Threatt Jr., who plays Mullins; Pierson Fodé, who plays Gaines; and several others from the film.

The Oxford Film Festival was created in 2003 by the Yoknapatawpha Arts Council and transitioned to a nonprofit organization in 2008. It celebrates film, the range of stories that can be shared through the medium and the diversity of those who love the art.

Addington teaches Cinema 396 at the university, which prepares the students for the Oxford Film Festival. They also learn how to develop their work and navigate film festivals. Ole Miss students and recent graduates have submitted several entries this year.

Tony King, a senior film production major from Oxford, has been involved with OFF for three years. Since he’s a local, he was able to attend the festival growing up.

“I greatly appreciate the opportunity I am given by it and the experience it holds for me as I can learn from and communicate with so many talented filmmakers,” King said.

The university’s Cinema 396 class sets the programs for the student category each fall.

King and another student, Lucinda Roberts, have a film in that category: “Clove,” in which two friends talk about the dangers smoking cigarettes, but the film asks “are cigarettes really the problem?”

Other films with a UM connection:

Other OFF events organized by UM:

Several other events are hosted on campus, and many are free for faculty, staff and students. For the full list of events, click here.