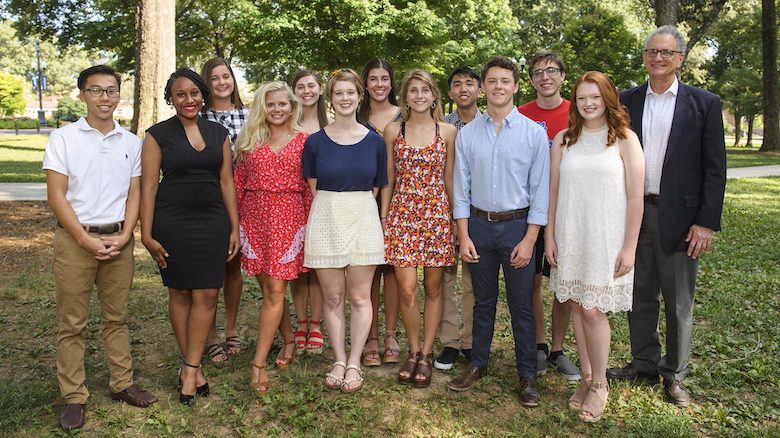 Seventeen freshmen in the Sally McDonnell Barksdale Honors College at the University of Mississippi have been awarded a total of $130,750 from four of the university’s most distinguished scholarship programs.

“Each year, a new group of high-performing students distinguish themselves to join the ranks of our SMBHC scholarship holders,” said Douglass Sullivan-González, Honors College dean.

“We are extremely proud of this year’s freshman group who already understand the demands of what it means to be ‘citizen’ and ‘scholar’ in a challenging environment. We anticipate four great years of their involvement in our university community.”

Bryant is a graduate of the Mississippi School for Mathematics and Science, where she was a Golden Triangle Area Scholar, MSMS Ambassador, 4-H Ambassador and Northeast Mississippi Student Leadership Conference Scholar. She is majoring in biochemistry.

Kiparizoska is a graduate of West Jones Junior-Senior High School. She won the AP Biology Award, first place in advertising design at the State Beta Convention, Spanish III Award and Algebra III Certificate. She is majoring in biochemistry.

Nandula, a graduate of MSMS, won the Ephemera Prize in the Eudora Welty Writing Contest. Other honors include superior ratings at the Mississippi Music Teachers Association competitions and Bach festivals, Best of Fair at the District Science Fair and finalist at the International Science and Engineering Fair in Los Angeles. Nandula’s major is accountancy.

Sims was a STAR Student, National Merit semifinalist and National Honor Society member at the Education Center. Her activities included Fellowship of Christian Athletes, Madison County Toastmasters and organizing voter registration drives, and she served as governor of the Mississippi Youth Legislature. Sims is majoring in biology.

Jones-Burdick is a graduate of Huntington High School, where she was in the National Honor Society, International Thespian Society, Distinguished Honors Society and Latin Honorary/French Honorary. She is majoring in psychology.

An Edwardsville Senior High School graduate, McSparin was an Illinois State Scholar and varsity field hockey captain, and was named to the High Honor Roll. She is majoring in chemical engineering.

Medling is a graduate of Dyer County High School, where she was in the Top 10 Percent, a DAR Good Citizen Award recipient and member of the National Honor Society. She is majoring in accountancy.

A Pass Christian High School graduate, Tran was an honor roll student. His activities included soccer, track and field, Red Cross volunteer and being an LAD Project tutor for children. Tran is majoring in pharmaceutical sciences.

Davis graduated from Granite Hills High School, where he was an AP Scholar and Code Keeper and published material in Reflections Literary Magazine. He is majoring in journalism.

French graduated from Malden Hills High School, where she was on the Principal’s Honor Roll, Who’s Who and Academic All-State in volleyball. French is majoring in chemistry.

Pratt is a graduate of Corinth High School, where she was in the Hall of Fame and a Fellowship of Christian Athletes champion. Her service activities included Country Cares for St. Jude, Adventure Camp recreation leader, Adult Bible Study worship leader and Vacation Bible School music leader. Pratt is majoring in integrated marketing communications.

Recipients of the Annexstad Family Foundation Leaders for Tomorrow Scholarship are:

Harris is a graduate of New Albany High School, where she won the Girl Scout Award, was a STAR Student and on the Honor Roll. Harris had a perfect score on the state U.S. History Test and highest grade-point averages in anatomy and physiology, world history, Spanish II, Algebra III and Gifted English III. She is majoring in biomedical engineering.

Lambert is a graduate of Kossuth High School. On the All A Honor Roll, he was active in the football camp, mentoring program and community health fair. Lambert is majoring in chemical engineering.

A graduate of MSMS, Nguyen was a Questbridge National Match finalist and won honorable mention in the Eudora Welty Creative Writing Contest. He is majoring in international studies.