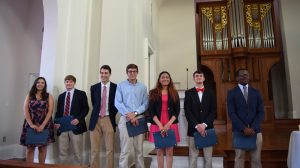 The Omicron Delta Kappa honor society has recognized seven University of Mississippi students with the ODK Freshmen Leadership Award, which was created in 2009 to identify, encourage and honor leadership among campus freshmen.

“It is amazing to witness the early leadership of our new students,” said Ryan Upshaw, ODK adviser. “It becomes much more difficult each year for our committee to select the recipients.”

Wes Colbert, a graduate of Amory High School, said he is thankful to receive the award.

“I got involved initially to meet people and become plugged into things that I cared about,” he said. “Knowing I made some impact is awesome, and I am grateful to ODK for recognition that many of us don’t feel that we deserve.”

An international studies major, Colbert is a member of the Sally McDonnell Barksdale Honors College and the Croft Institute for International Studies. He is an Ole Miss Ambassador, orientation leader and a member of Delta Psi fraternity, the ASB Freshman Council, Lambda Sigma and The Big Event logistics subcommittee.

Bevis is a public policy leadership major from Florence, Alabama. He is a member of the Honors College and the Trent Lott Leadership Institute. He serves as an ASB senator and vice-chair of the ASB Senate Research and Development Committee. He is a member of College Democrats, Rebels for Christ and Phi Eta Sigma honor society.

A broadcast journalism major from Quitman, Brown is a LuckyDay Scholar, Provost Scholar and member of the UM Gospel Choir, Pride of the South Marching Band, ASB Freshman Council, Alpha Lambda Delta and Lambda Sigma. She is an orientation leader and participates in the ALLIES Program.

Hitt is a public policy leadership major from Yazoo City. He is a member of the Chancellor’s Leadership Class, the Lott Leadership Institute and College Republicans. He serves as an ASB senator, Freshman Council president and pledge class president for his fraternity, Sigma Nu. He has also volunteered with The Big Event.

Miller, from Murfreesboro, Tennessee, is majoring in public policy leadership. He is a member of the Honors College and the Lott Leadership Institute. He is a McLean mentor for the Batesville Boys and Girls Club, president of the Brown Hall Community Council and chaplain of Kappa Sigma fraternity. He is also a member of the ASB Freshman Council and Lambda Sigma.

A native of Maracaibo, Venezuela, Salas-Gonzalez is studying art. She is a member of the ASB Freshman Council, Lambda Sigma, Latin American Students Organization, Student Activities Association and the Students for a Safe Ride Committee. She is an orientation leader and RebelTHON morale captain and was selected as a community assistant.

The award has a history of identifying students who have gone on to hold some of the top campus leadership roles. Previous recipients Davis Rogers, Rod Bridges and Austin Powell all went on to become Associated Student Body president. John Brahan recently served as ASB vice president, and Terrius Harris was recently elected president of the Black Student Union.

Omicron Delta Kappa is a 100-year-old leadership honor society that has initiated more than 300,000 members at since its founding. The Alpha Phi circle was founded at UM in 1936. The society has more than 285 active circles at colleges and universities across the United States.