Movies from Spanish- and Portuguese-speaking countries slated over coming month 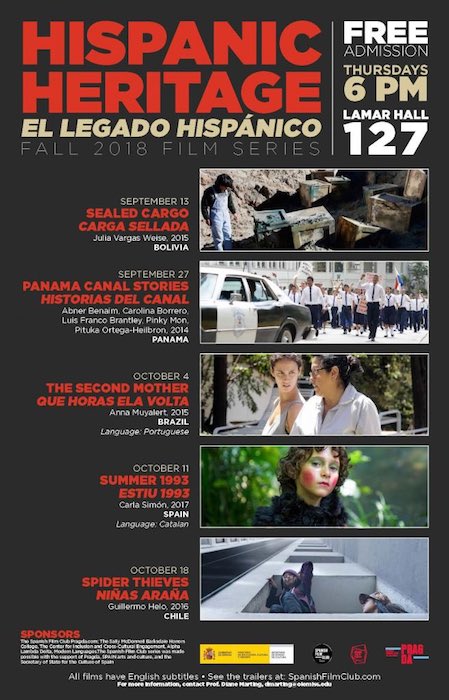 The University of Mississippi’s Department of Modern Languages will present five films from Spanish- and Portuguese-speaking countries as part of Hispanic Heritage Month, which runs until Oct. 15 at the university.

The first of five Hispanic Heritage Series films, “Sealed Cargo” a Bolivian black comedy on the topic of dumping toxic wastes in rural areas, kicks off the series at 6 p.m. Thursday (Sept. 13) in Lamar Hall, Room 127. All screenings are free and open to the public.

“Thanks to the dedication of our Spanish faculty, the Oxford and UM community will have another golden opportunity to explore and learn about Hispanic cultures,” said Daniel O’Sullivan, UM chair of modern languages. “Events like these showcase the dedication to cultural diversity from our department, the university and the surrounding community.”

The five films have English subtitles. All screenings are at 6 p.m. in Lamar Hall, Room 127:

The Hispanic Heritage Series is made possible with the support of Pragda, the Spanish Film Club.com, SPAIN Arts and Culture, and the secretary of state for the culture of Spain. See the trailers at Pragda.com.

Several campus units also helped with publicity for the series, including the UM departments of English, history, political science, and sociology and anthropology; the College of Liberal Arts and its cinema minor program; Croft Institute for International Studies; and the Sarah Isom Center for Women and Gender Studies, as well as the Oxford Film Festival.

This year’s series offers more diversity in both topics and languages, which was intentional, said Carmen Sánchez, instructor in modern languages and one of the event organizers.

Diane Marting, associate professor of modern languages and another of the organizers, noted the strength of the group of films.

“This year, the series has several hard-to-see and well-made films from unexpected countries,” Marting said. “As a bonus, we also showcase four female directors.”

The films do more than simply give viewers a chance to hear Spanish language, said Irene Kaufmann, UM lecturer in Spanish.

“Watching foreign movies not only gives us an opportunity to peek into far-away realities and to listen to foreign languages; it also exposes us to a wider range of film styles,” Kaufmann said.