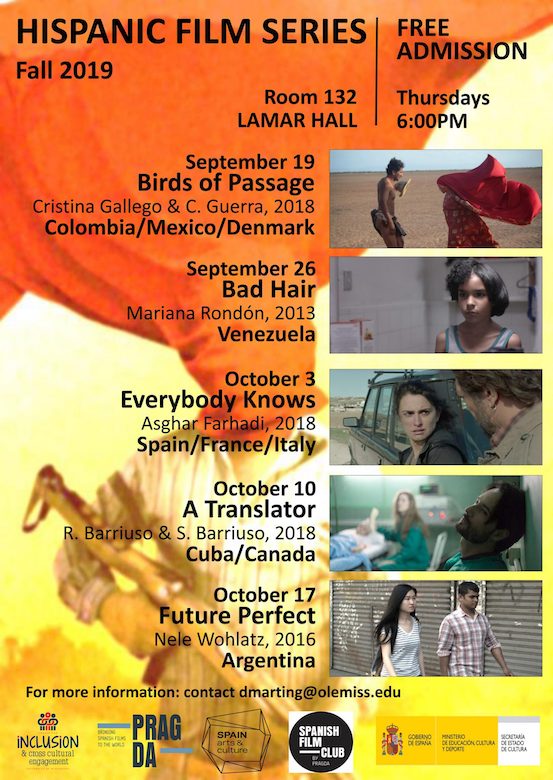 The University of Mississippi will observe Hispanic Heritage Month with its annual film series, which begins Sept. 19 and features five movies that explore little-known Spanish-American history and also “critical explorations of daily life and myth,” among other topics.

The UM Department of Modern Languages presents the annual film series, which runs through Oct. 15. Each movie has English subtitles and will be screened at 6 p.m. Thursdays in Lamar Hall, Room 132. The first screening is Sept. 19.

The five movies offer a little something for everyone, said Diane Marting, associate professor of modern languages and one of the organizers.

“This year, the Hispanic Heritage Film Series alternates between little-known Spanish-American history and critical explorations of daily life and myth,” Marting said. “For instance, the first film, ‘Birds of Passage,’ brings to light a little-known story of the beginnings of the drug trade in Colombia in the Wayuu tribe.”

The films to be featured are:

Sept. 19 – “Birds of Passage” For Colombia’s submission for best foreign language film, the creative team behind Oscar-nominated “Embrace of the Serpent” returns with this inspired mob epic for the ages: a completely fresh take on the origins of the Colombian drug trade, far from “Narcos” and Pablo Escobar, as told through the involvement of an indigenous family.

Sept. 26 – “Bad Hair” A 9-year-old boy’s preening obsession with straightening his hair elicits a tidal wave of homophobic panic in his hard-working mother, in this tender but clear-eyed coming-of-age tale. Junior is a beautiful boy, with big brown eyes, a delicate frame and a head of luxurious dark curls. But, Junior aches to straighten those curls, to acquire a whole new look befitting his emerging fantasy image of himself as a long-haired singer.

Oct. 3 – “Everybody Knows” Penelope Cruz, Javier Bardem and Ricardo Darín star in the new psychological thriller. The story follows a Spanish woman living in Buenos Aires who returns with her children to her hometown outside Madrid for a wedding. When a main character’s daughter goes missing, text messages arrive asking for ransom and the film takes a hard turn into nightmarish territory, bringing secrets to light.

Oct. 10 – “A Translator” Based on the little-known true story of how 20,000 Chernobyl victims were eventually treated in Cuba, the film unfolds as a tale at once historical and personal, brought to life in crisply shot, beautifully realized period detail of a Havana on the brink of an economic crisis.

Oct. 17 – “The Future Perfect” In this whimsical romantic comedy, Xiaobin is 17 years old and does not speak a single word of Spanish when she arrives in Argentina. But a few days later, she already has a new name, Beatriz, and a job in a Chinese supermarket. Her family lives in a parallel world in a launderette, far removed from the Argentinians. Xiaobin secretly saves money and enrolls at a language school. She tries out in the street what she learns there.

“‘The Future Perfect’ shows the challenges that an Asian immigrant faces when she tries to integrate into a Spanish-speaking country, and ‘Bad Hair’ depicts a boy’s search for sexual identity in the racist and homophobic environment of Caracas’s projects,” said Gabriel Garrido, UM instructor of modern languages and co-organizer.

“I am especially passionate about ‘A Translator’ because the film is based in a real story that takes place in 1986, in Cuba, after the Chernobyl nuclear accident in the former Soviet Union,” Fernández said. “Many university professors and translators were sent to serve as interpreters for Ukrainian, Russian and Byelorussian patients who have been treated in Cuba ever since, totaling over 25,000.”

She has a personal connection to the story in “A Translator” as well. Her brother-in-law is a dermatologist in Havana who has treated many of these children for several years.

The Hispanic Heritage Series is made possible with the support of Pragda, the Spanish Film Club.com, SPAIN Arts & Culture, and the Secretary of State for the Culture of Spain. Besides the Department of Modern Language, its major sponsors are the Sally McDonnell Barksdale Honors College, Center for Inclusion and Cross-Cultural Engagement and Alpha Lambda Delta Honor Society.