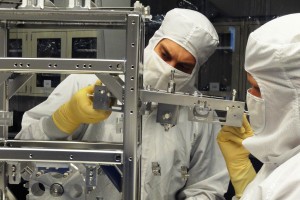 A UM physicist and graduate student make sure that LIGO equipment is working properly.

Gravitational waves and the Laser Interferometer Gravitational-wave Observatory experiments are the topic for the monthly Science Cafe organized by the University of Mississippi Department of Physics and Astronomy.

The February meeting of the Oxford Science Cafe is set for 6 p.m. Tuesday (Feb. 16) at Lusa Bakery Bistro and Bar, 1120 North Lamar Blvd. Katherine Dooley, assistant professor of physics and astronomy, and Marco Cavaglià, associate professor of physics and astronomy and assistant spokesperson of the LIGO Scientific Collaboration, will discuss “Gravitational Waves: 100 years after Einstein.” Admission is free.

“Gravitational waves are ‘ripples in the fabric of space-time,’ arriving at the earth from cataclysmic events in the distant universe,” Cavaglia said. “They carry information about their dramatic origins and about the nature of gravity that cannot otherwise be obtained.”

The 20-minute presentation, followed by a question-and-answer session, will include discussions of how LIGO works and how gravitational waves are generated.

Dooley earned her bachelor’s degree from Vassar College and a doctorate from the University of Florida. Before joining the UM faculty, she was a postdoctoral researcher at the California Institute of Technology and Max Planck Institute for Gravitational Physics, also known as the Albert Einstein Institute, in Hannover, Germany.

A LIGO team member inspects the detector portion of the technology inside the laboratory.

Awards received by Dooley include the 2010 Tom Scott Award for distinction in research at Florida and a LIGO student fellowship from Cal Tech. Having worked directly with both the original and Advanced LIGO projects, Dooley spent four years at the LIGO Livingston site, first installing new hardware to upgrade the initial LIGO detectors and then commissioning the observatory’s interferometer. Dooley’s research interest is experimental gravitational-wave physics.

Cavaglia earned his bachelor’s and master’s degree from the University of Turin, Italy, and a doctorate in astrophysics from the International School for Advanced Studies in Trieste, Italy. Before coming to UM, he was a postdoctoral researcher at Tufts University, the Max Planck Institute for Gravitational Physics, in Potsdam, Germany, and the Massachusetts Institute of Technology and a lecturer at the University of Portsmouth in the United Kingdom.

Over his career, Cavaglia has authored more than 120 publications in peer-reviewed, scientific journals and has received several research awards. Since January 2012, he has served as assistant spokesperson of the LIGO Scientific Collaboration. Cavaglia’s research interests are LIGO data analysis and theoretical astrophysics.

For more information about the Department of Physics and Astronomy, visit https://physics.olemiss.edu/.