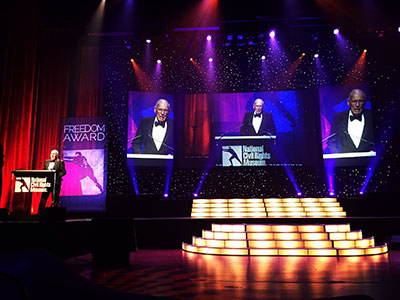 Winter is known for his role in leading the charge for publicly funded primary education while he was the 58th governor of Mississippi from 1980 to 1984. He governed under a belief that all people, regardless of race or class, hold the same rights and privileges.

“William Winter is a Mississippi treasure,” said Jesse L. White Jr. (BA history and political science ’66), an adjunct professor at the University of North Carolina at Chapel Hill who ran Winter’s successful gubernatorial bid in 1979. “He’s been a mentor to me and to countless others, showing us the true meaning of service through his selfless leadership.”

The Freedom Award came with a $10,000 honorarium, which Winter contributed to the William Winter Institute for Racial Reconciliation at UM as part of a matching campaign that raised more than $60,000 for the Institute.

Created by the National Civil Rights Museum for the Freedom Award ceremony, the video reveals Governor Winter’s lifelong commitment to Mississippians, at times in the face of life-threatening opposition.