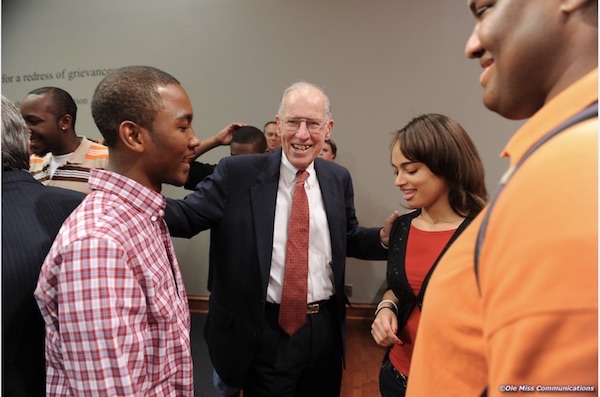 Donations will be matched to reach $20,000 goal to support UM Winter Institute

In connection with the annual Freedom Award ceremonies, the University of Mississippi is launching #WinterLegacy, a $20,000 crowdfunding campaign to cement the legacy of former Gov. William F. Winter (BA history and political science ’43 JD ’49) through the William Winter Institute for Racial Reconciliation.

Winter will receive the prestigious Freedom Award on Thursday (Oct. 20) from the National Civil Rights Museum in Memphis, Tennessee.

The former governor’s plans to dedicate the $10,000 honorarium accompanying his award to the university’s Winter Institute launched the idea for a crowdfunding campaign to build on his lifelong legacy of giving to his home state. Thanks to his generosity, every dollar contributed to #WinterLegacy, up to $10,000, generates an additional $1 to pay tribute to a true Mississippi icon.

“He’s been a mentor to me and to countless others, showing us the true meaning of service through his selfless leadership.”

Sustaining Winter’s legacy of service to Mississippi, the Winter Institute works in communities and classrooms to end discrimination based on difference. Using four programmatic pillars – youth engagement, community building, academic service and advocacy – the institute’s staff works with students, citizens and communities to help Mississippi become a welcoming place for all.

For more information or to donate to #WinterLegacy, go to https://ignite.olemiss.edu/project/2952.