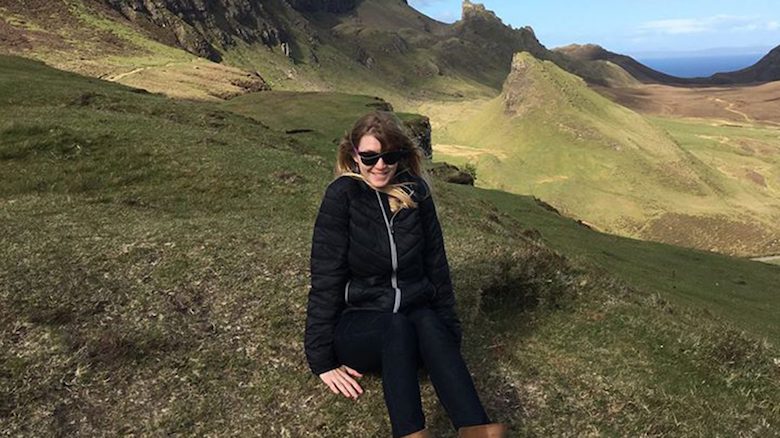 Susie Penman, the university’s first graduate of the Master of Fine Arts in Documentary Expression program, visits the Isle of Man in Scotland. Submitted photo

Support from fellow students and faculty proved invaluable for Susie Penman, the first graduate in the Master of Fine Arts in Documentary Expression program at the University of Mississippi.

Penman, who also earned two other degrees from the university– a bachelor’s degree in journalism in 2007 and a master’s in Southern studies in 2012 – received her latest degree in August. She said she made good use of the resources at UM and its Center for the Study of Southern Culture, where the new MFA program is housed.

“For someone who is thinking about it, it’s a very supportive program,” Penman said. “There are people here to help you not just pursue what you are already interested in, but certainly in my case because I had never done film before, there were people who were patient and who taught me what I needed to know.

“That’s what I got out of it most, just learning this whole new skill set, which is working with film.”

Her film, “The Knowing of People,” is about juvenile crime and punishment in New Orleans. She took a personal experience she had while living in the city and brought it to life onscreen.

“I was carjacked a couple of years ago, and the people who did it were three teenagers who were tried as adults,” Penman said. “When I found that out, before I even knew about the MFA program, I just got interested in it because I was not part of the process at all; I just got a letter saying they’d been sentenced.

“I didn’t know anything about how the justice system worked and I wanted to explore that, and then I applied for the program and it just seemed like a natural fit because it was the thing I found myself thinking about and talking about more than anything else. I was upset about it and I wanted to do something.”

Penman started reaching out to people in New Orleans, asking questions about how the criminal and juvenile courts worked, and getting a better understanding the role of the district attorney and other players in the process.

“Things I’d been oblivious to because I’d been lucky enough not to have been involved with crime before – whether as a victim or living in a community affected by crime – so it’s a combination of personal experience and field work,” Penman said.

“I asked people who either work in the criminal justice system or have been affected by violence in the community somehow and pieced together a story about the bigger picture of juvenile crime in New Orleans told through by what happened to me.”

When she arrived last fall to begin the MFA program, Penman thought she would work on an audio-based project, such as a podcast or an oral history, or photography.

“I didn’t think I’d be doing film, and then I saw that Andy Harper was teaching a class and became interested and just thought I would do it to learn it,” Penman said. Although she was at first reluctant to commit to filmmaking for her thesis, she ended up loving the work and took full advantage of the support.

“If someone is thinking about getting their MFA, there are just wonderful people here who are helpful,” Penman said. “There is a good mix of people – you know, historians – but also a good balance of scholarship and technical tools that you need to learn.

“We were all there to bounce ideas off of each other, and I never felt alone, I always felt like there were people within reach I could ask questions of. I liked the feedback I would get from people.”

Andy Harper, director of the Southern Documentary Project, said he couldn’t be happier that Penman is the first MFA graduate.

“Susie represents everything we are looking for in adding students to our new program: someone who has a background in documentary work, but more importantly has a desire to learn more about the intersections of cultural studies and documentary arts,” Harper said.

Susie’s MFA thesis film on juvenile incarceration is at once personal and provocative – a great example of advocacy-based documentary work that is so important today. Now that we have one MFA graduate in the books, I can’t wait to see who is next and what stories they will tell.”

One thing that surprised Penman was how much she enjoyed the editing process.

“Filming is hard, and there are so many things that can go wrong,” she said. “I try to remind myself that most people work in teams and they have a camera person and someone doing the interview and a sound person, and this was just me, the whole time.”

Being thrown into the field made her realize there is much more work involved in filming than people understand, Penman said.

“You have to get everything just right, and in most cases, I didn’t,” she said. “I usually got one crucial thing wrong that I had to make up for, but that was part of the learning process.”

Besides her thesis, one of the films Penman worked on for Ava Lowrey’s Advanced Documentary class last spring was “Sister Hearts,” about Maryam Uloho, a woman who was incarcerated for more than 11 years for a crime that she says she didn’t commit. Her sentence was overturned, and she runs a thrift store in New Orleans that aims to help people, mostly women, who have been incarcerated.

Although Uloho’s footage did not end up in Penman’s thesis film, it still informed her work.

“For the past year, I’ve been immersed in all things related to incarceration and trying to understand the various ways the system functions or doesn’t function, and her story was crucial in helping me understand some aspects of that, specifically in regard to women,” Penman said.

“There are so many different stories that revolve around crime and violence and punishment that we really need to listen to people who have been incarcerated before and who have had these experiences. There are so many individual stories, and I feel like that gets forgotten in the whole mess.”

“It’s been a privilege to watch Susie grow as a documentarian, and her success is a reminder of the importance of this program in shaping a new class of Southern documentarians,” Lowrey said.

Penman is continuing her documentary work with incarceration this fall as a doctoral student in American studies at the University of North Carolina.

“As long as I can talk to people who have stories to tell me, I feel like that’s a way of remembering that this is something that really affects tons of people in so many different ways,” Penman said. “The MFA program helped solidify the idea in my head that I want to keep studying incarceration and using documentary methods to do that.

“It helped reaffirm the importance of people’s voices and storytelling in doing research instead of just going to a library.”