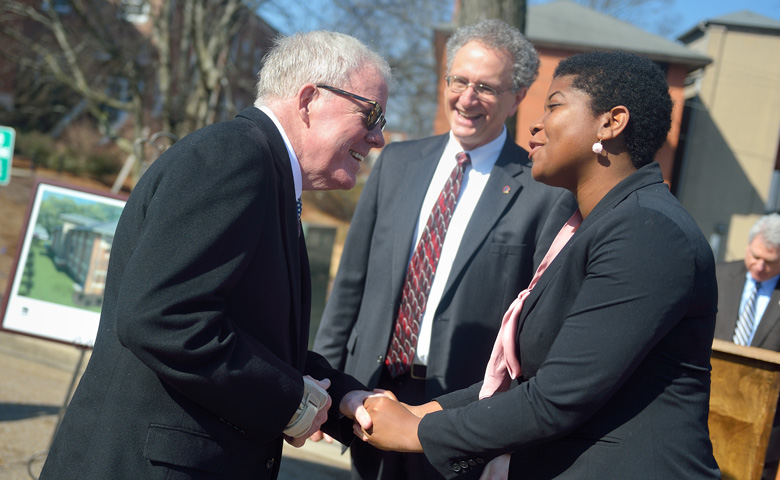 With a $250,000 gift to the University of Mississippi Science Building Fund, the FedEx Corp. honored Ole Miss alumnus Jim Barksdale upon his retirement as a longtime member of the global shipping company’s leadership team.

“Jim was an innovative leader during his tenure at FedEx and went on to serve as an outstanding board member for almost two decades,” said Frederick W. Smith, Chairman and CEO.  “We at FedEx are pleased to honor him for his great contributions to our company.”

Barksdale served 13 years in various senior management positions at FedEx Express, including executive vice president and chief operating officer. He also provided leadership on the company’s board of directors for 19 years.

“I was quite honored in receiving such a wonderful gift from FedEx and was very excited, as was my family,” said Barksdale of Jackson, Mississippi. “FedEx was and is a part of my life. I am glad to be appreciated in this way.”

FedEx wanted Barksdale to choose where to direct the gift at Ole Miss.

“I chose to devote my gift to the STEM Building Fund because I think it will be significant to further our STEM training at the university,” said Barksdale, a 1965 graduate of the UM School of Business Administration. “The future of the economic world depends upon having more graduates in science, technology, engineering and math and I hope my gift will be in furtherance of those aims.”

Barksdale himself is an innovator credited with leading the development of package tracking computer systems for FedEx. Additionally, on the board, he served as the chair of the Information Technology Oversight Committee.

The new STEM building will be designed to enhance active or cooperative learning, which is a departure from students simply listening to a professor’s lecture. Students will spend class time in group work and discussions.

The former lecture materials will be delivered in modules that the students read on their laptops at their convenience. Faculty members will see quiz results and know what material students had difficulty with, enabling them to target those areas in the next classes.

“It’s time that we put a stake in the ground and say that Mississippi is going to lead the way in respect to STEM,” said School of Education Dean David Rock. “The way we’re going to do that is to engage our children all across the state. We need to actively involve our K-12 partners to show all of our children the truly amazing things we’re doing at Ole Miss and the great opportunities we offer with respect to technology, math and the sciences.”

“With this investment to the UM Science Building, FedEx is investing in the next generation of leaders and innovators in science and STEM by providing competitive facilities and a commitment to advancing the industry research and innovation,” she said.

Site work has been completed on the university’s new building dedicated to science, technology, engineering and mathematics. Among factors driving plans is the crucial need on the state, regional and national level to increase graduates in STEM fields. The 204,000-square-foot building, which will join the Science District in the heart of campus, has an estimated price tag of $160 million. Private support is being sought for the state-of-the-art facility, which will serve all Ole Miss students with active learning classrooms and labs.

“The FedEx gift in honor of one of our most esteemed graduates, Jim Barksdale, gives significant support to our vision to become one of the nation’s leading student-centered learning environments for STEM education,” said Interim Chancellor Larry Sparks. “He has done so much for the university throughout his professional life and we greatly appreciate his interest in shaping our future.”

A former member of the UM Foundation Board of Directors, Barksdale served as president and chief executive officer of Netscape Communications Corp. from January 1995 until the company merged with America Online in March 1999. Upon completion of the merger, Barksdale joined Time Warner’s board of directors. Prior to Netscape, he served as CEO of AT&T Wireless Services.

The Barksdale Foundation established the Sally McDonnell Barksdale Honors College at the university in 1997, and in January 2000, the foundation granted $100 million to the state of Mississippi to create the Barksdale Reading Institute to help Mississippi children improve their reading skills.

In 2008, Barksdale and his wife, Donna Kennedy Barksdale, presented a gift to the UM School of Education for the creation of the Mississippi Principal Corps, an initiative designed to change the way Mississippi school principals are trained. The Barksdales have also sponsored Parents for Public Schools’ “Schoolhouse to Statehouse” project, which trains parents to become more engaged with public schools in the state.

In addition to the FedEx board, Barksdale has served on the boards of Time Warner and In-Q-Tel. He also was appointed to the President’s Foreign Intelligence Advisory Board by then-President George W. Bush.

The UM Science Building Fund is open to gifts from individuals and organizations. Checks may be mailed to the University of Mississippi Foundation, with the endowment noted in the memo line, to 406 University Ave., Oxford, MS 38655. Gifts can also be made online by visiting give.olemiss.edu.

For more information on ways to support the Science Building Fund, contact Charlotte Parks, Vice Chancellor for Development, at cpparks@olemiss.edu and 662-915-3120.