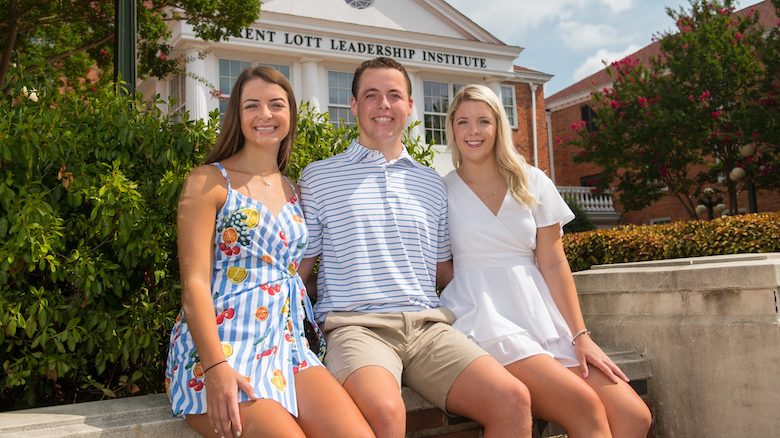 Freshman siblings (from left) Sophia, Calvin and Isabella Sanders share a moment outside the Trent Lott Leadership Institute at the University of Mississippi. The triplets, who hail from Jefferson City, Missouri, are all majoring in public policy leadership. Photo by Kevin Bain/Ole Miss Digital Imaging Services

Sanders siblings recruited by Anne Weston, Katherine and Will Sistrunk

It’s fairly common for siblings and children of University of Mississippi alumni to attend the family alma mater. But in the case of Calvin, Isabella and Sophia Sanders, it wasn’t their parents who most influenced their decision – it was another set of triplets.

The incoming freshman triplets were actually drawn to the university through Anne Weston, Katherine and Will Sistrunk, another set of triplets who graduated from UM in May. The connection between the two families, both from Springfield, Missouri, began before the Sanders triplets were even born.

“Their mother befriended our mother while she was pregnant with us,” Isabella Sanders said. “From that point, our two families became intertwined with one another. We’ve all been friends forever.”

While the Sanders trio was still at Springfield Catholic High School, the Sistrunk siblings, who are four years older, had already moved to Oxford to enroll at UM. Their mentorship and love for the university was a big part of why the Sanders triplets chose to consider continuing their education there as well.

“They convinced us to visit them, which we did,” Sophia Sanders said. “Once we did, we fell in love with it.”

Calvin Sanders said he was “hooked” on Ole Miss because it feels like a smaller school but has all the traditions of the SEC.

“Between the friendly, family atmosphere, the many different resources and opportunities to make connections, Ole Miss was an offer I couldn’t refuse,” he said.

All three of the Sanders siblings are majoring in public policy leadership at UM. Isabella Sanders said she was immediately drawn to the Trent Lott Leadership Institute and would one day like to meet Trent Lott, the former U.S. senator.

“All three of us want to travel,” she said. “Our first choice would be to study abroad in China, but I’d like to visit Spain as an exchange student as well.”

Now that they live in campus residence halls, they have found themselves separated for the first time.

“Isabella lives across the hall from me, and Calvin lives in the dorm right next to ours,” Sophia said. “Ironically, my roommate is also a triplet, so we have that in common.”

“Being a triplet with my two best friends nearby, it’s kind of hard to get homesick,” Calvin said. “Plus, our parents have season tickets to all of the football games, so we’re sure we’ll be seeing them on a regular basis.”

On top of that, the Sistrunks still stay in touch with the Sanders siblings.

“Not a week goes by that we don’t talk with one or more of them on the phone,” Sophia said.

Though new to the university environment and the college experience, all three of the triplets said they want to participate in campus activities such as Greek life, student government, intramural sports and community service.

“Both mom and dad were Greek, so all three of us are rushing,” Calvin said.

“We were in the university’s MPower program for high school students,” Sophia said. “I’d like to be involved as a mentor and a student orientation leader by next year.”

All three played soccer in high school and look forward to playing it and other sports once they are part of the Greek community. They said they are also looking forward to participating in the Big Event, an annual community service campaign which involves the entire Ole Miss student body volunteering in Oxford and Lafayette County.

“Giving back to the community is something both of our parents have always done, so each of us is committed to doing the same while we are in school and beyond,” Isabella said.

“We want to become known on campus as people who are trustworthy,” Calvin said. “Our parents and grandparents are, and we want to be like them.”

As for where the trio see themselves in four years, one already has set her sight on the prize.

“Anne Weston earned a Taylor Medal (the university’s highest academic honor),” she said. “To be able to follow in her footsteps would truly be a dream come true.”

One thing is for certain: the Sanders siblings plan to continue sharing their love of UM with those coming behind them – in triplicate.

“We loved Ole Miss before we got here,” Sophia Sanders said. “Now that we’re actually a part of it, we can’t help but tell others about what a great place it is. Hopefully, they will find their way here, too.”