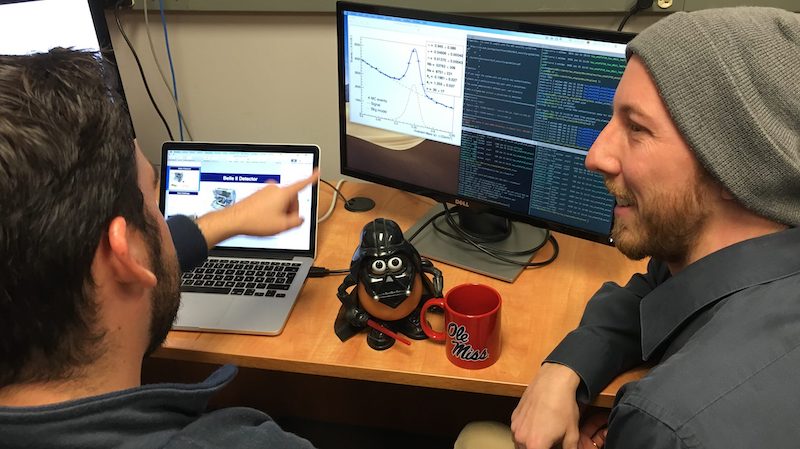 A team of University of Mississippi scientists are part of a global network of researchers making significant contributions to a groundbreaking particle physics project that promises to improve our understanding of the nature of all matter.

After years of careful construction and preparation, the Belle II experiment at the SuperKEKB accelerator research facility in Tsukba, Japan, has started collecting data. First collisions with the full detector started earlier this year. A recent fire at the facility caused the accelerator to be shut down briefly, but it is once again smashing subatomic particles together at the center of a sophisticated new detector.

The Belle II collaboration includes more than 900 members from around the world seeking to answer a great mystery of particle physics: If matter and antimatter were created in equal amounts during the big bang, why is the universe today filled almost entirely with matter? To try to solve that mystery, researchers use a particle accelerator to collide bunches of particles of matter (electrons) and their antiparticles (positrons) to simulate the high-energy environment immediately following the big bang.

“The primary goals of the Belle II experiment are focused on obtaining a better understanding of fundamental particles and their interactions,” said Jake Bennett, assistant professor of physics and astronomy and one of the university’s four principal investigators. “After major upgrades of the accelerator and detector, Belle II will search for new physics with a data set about 50 times larger than that of the original B-factories.

“We will use Belle II data to study new particles and processes in an attempt to gain a better understanding of fundamental particles and their interactions.”

A Belle II member institute since 2013, the university has four principal investigators, a staff member, a postdoctoral researcher and two graduate students working on the project. Together, the team has contributed to hardware, software and computing projects for the global experiment.

Real-world applications of particle physics discoveries include medical imaging such as PET scans, radiation therapy, high-resolution imaging and materials analysis and radiation detection, such as at ports of entry.

Belle II represents the next evolution of the “B-factory” experiments, which produce copious amounts of B mesons that provide an ideal environment to study differences between the behavior of matter and antimatter, known as CP violation. Initial experiments were conducted at the KEK accelerator research facility in Tsukuba, Japan, and BaBar at the Stanford Linear Accelerator Center in California.

Observations made by the B-factories resulted in the 2008 Nobel Prize in Physics being awarded to Japanese scientists Makato Kobayashi and Toshihide Maskawa, who described the origin of CP violation in the Standard Model of particle physics.

The university’s role in the collaboration is a significant one, Bennett said.

“We are responsible for developing an overall data production strategy that incorporates the physics analysis strategy, resource and software readiness and other issues that ensure smooth and timely production of data sample,” he said.

“Despite the success of the Standard Model of particle physics, significant questions remain unanswered,” Bennett said. “Belle II is in an excellent position to answer some of these important questions.”

Belle II and SuperKEKB are poised to become the world’s first Super B-factory facility. The KEKB accelerator, which operated from 1999 to 2010, holds the world record for luminosity – which is a measure of the rate of collisions – for an electron-positron collider. SuperKEKB, its successor, is designed to reach a luminosity 40 times greater.

Belle II researchers aim to accumulate 50 times more data than its predecessor, Belle, and to seek out new physics hidden in subatomic particles that could shed light on mysteries of the early universe.

For more information on the Belle II Experiment, visit https://belle2.jp.