Networking event highlights advice for a variety of paths after graduation 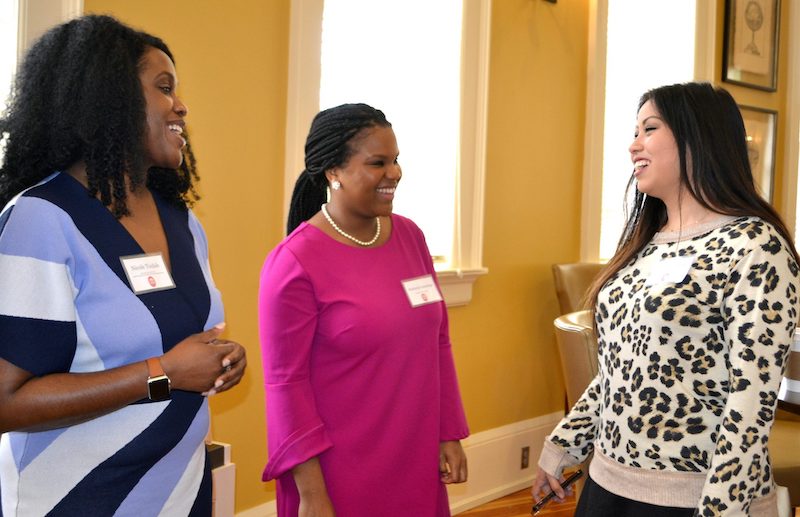 UM alumnae Nicole Tisdale (left) and Kim Dandridge discuss their career paths in government and the legal fields with English major Hannah Woods, of Yazoo City, during the recent ‘Next Chapters: Career Networking with English Alumni’ event. Alumni from a variety of fields returned to campus to discuss how their English degree is serving them in their careers and also shared tips and pointers for navigating the job market. Photo by Pam Starling/Division of Outreach and Continuing Education

The “Next Chapters” career networking program was a collaborative effort of the university’s College of Liberal Arts and its Department of English, and the UM Internship Experience Program.

“The common assumption is that you can only become a teacher or a writer with an English degree,” said Rachael Harbourne, a junior from Dallas. “It was great meeting professionals with an English background who all do something different and are using what they learned here.”

Jason Solinger, associate professor of English, headed up the two-day event. He said that as chair of the department’s publicity and outreach committee, one of his goals is to develop more career programming options for students.

“We wanted to work on better connecting English alumni with one another and with our students,” Solinger said. “The event gave them the opportunity to benefit from the wisdom and experience of our alumni who are now working in a wide variety of professions, and our alumni really enjoy coming back to campus to speak to the future graduates.”

Solinger teamed with the Office of College Programs that houses the Internship Experience Program.

“Over the years, a number of our English majors and minors have worked with the Internship Experience office to secure pivotal summer internships that have helped them pursue rewarding careers after graduation,” he said.

The two-day networking event was designed for English majors and minors, but students from throughout the College of Liberal Arts were welcomed. The goal was to provide an opportunity to meet and learn from alumni who can explain the value of an English degree in today’s job market as well as provide honest advice about the job search process.

Nicole Tisdale, a 2010 political science graduate with a minor in English, earned a Juris Doctor from the UM School of Law before serving the past 10 years in the U.S. House of Representatives as a subcommittee staff director for homeland security.

“As a staffer on Capitol Hill, 80 (percent) to 90 percent of my job is writing,” Tisdale said. “I know people may not think that politics involves a lot of writing, but for me it does.

“I’m not in front of the camera, and I don’t talk about the bills to the press. The members of Congress that I work for do that, but someone has to write the speeches, bills and letters.”

Tisdale shared how her English courses helped her learn to immerse herself in different topics and articulate what she learned.

“I didn’t graduate from Ole Miss being an expert in ISIS and Chinese espionage, but I did learn how to immerse myself in the subject matter and provide analysis for the variety of material I studied each semester,” she said. “This trained me well for what I do now in D.C.”

Kimbrely Dandridge is a 2013 UM graduate who majored in journalism with a minor in English. Upon graduation, she interned at the White House Office of Presidential Personnel and then went to law school at Texas Southern University. She is an attorney for Gap Inc. in San Francisco.

“How I word a contract or place a comma makes a big difference, and my English background gives me an edge,” Dandridge said.

During the panel discussion, students got advice from each of the professionals on how to pursue their own career paths after graduation. 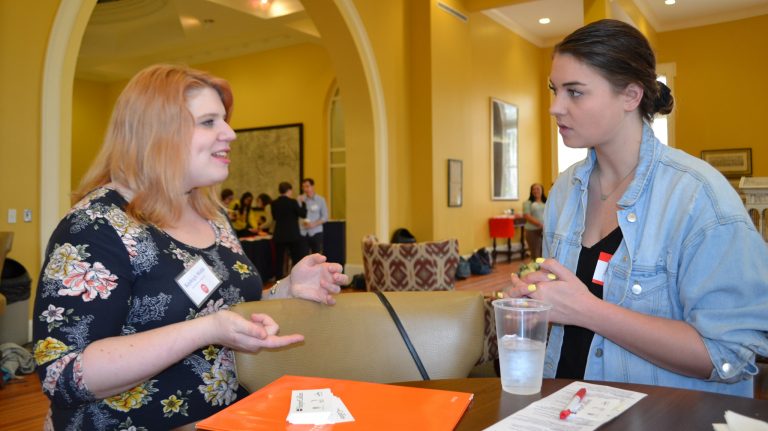 Kayleigh Webb (left) an associate publicist with HarperCollins Publishers, shares career advice with UM junior Emily Capponi, of Seattle. Webb advised students at the networking event to accept ‘no’ graciously during their job search because in her case, those rejections eventually led her to a fulfilling career. Photo by Pam Starling/Division of Outreach and Continuing Education

Kaylee Webb, a 2014 UM graduate who is an associate publicist with HarperCollins Publishers in New York, advised students to accept “no” with grace during the job search process.

“Rejection means you did something,” Webb said. “You took the first step.”

Dandridge encouraged students to market themselves through their LinkedIn profiles.

“I got my job with Gap because a recruiter found me on LinkedIn. You never know which companies and recruiters may be looking for the skills you have.”

Lindsey Neyman, a production talent manager with FuseFX in Los Angeles, also said that LinkedIn plays a big role when she is hiring new employees.

“Check out the backgrounds and career paths of the people who have a career you would be interested in,” she advised. “Where did they get started? It may show you the first rung on the ladder to get where you want to be.”

Kent Jackson, a senior product manager with Core Logic in Oxford, told students to think about learning as a new language.

“Whatever field you pursue, you’ll just need to learn the vocabulary,” he said. “If you do research on the company and the field before you go into an interview, it will help you so much.”

A networking reception with the speakers followed the discussion.

Emily Capponi, a junior English major from Seattle, said that having opportunities to speak one-on-one with alumni gave her confidence that she is on the right career path.

“They kept reassuring me that I would be prepared for a great career,”Capponi said. “Several of the alumni said that while they were completing their degree they didn’t know exactly which field they would ultimately go into, and obviously it worked out for each of them.”

After attending the events, Rachel McKellor, a senior English major from Purvis, said she has a different outlook on rejection in the job market.

“I got a lot of advice about being open to rejection, which closes doors but opens them at the same time,” she said. “The professionals told me how certain job opportunities wouldn’t work out and they would get disheartened, but because of that, another door opened and it led them to something they wouldn’t have expected.

“I might have been a person who, if a door closed, I would have walked away, but hearing from successful people about how this happened to them, now I know it’s common for most people. It’s all going to come down to my attitude.”

Feedback provided by alumni who participated in the inaugural Next Chapters:

Tarah Butler: “I am excited to give back to students and share my real world experiences and mistakes.”

Winston Collier: “An amazing event. It’s been a pleasure to meet these students with such bright futures. It’s also been fun to network with fellow alumni from the English department, so it’s been an overall excellent two days.”

Kathryn Dilworth: “I think what was really so amazing for us was to come and realize the impact our experience can have for students, and I know that sounds silly, but sometimes that’s one of the greatest benefits of being a volunteer. I get to share my experience and help someone, because we all came through the same way as English majors, like, “what are we going to do” and “we don’t have a mentor,” so I think that you all need to appreciate how meaningful it was for the volunteers too and also of course for the students.”

Duncan Gray: “The idea is wonderful. The energy level was high and the students came with pointed and appropriate questions. I hope I was of some help.”

Virginia Kinnier: “Today was as much of a learning experience for me as the students. It was inspiring to hear their ideas and dreams for the future. So many were impressive and seem to have their ducks in a row, much more than I did when I was in their stage of life.”

Bishop Lewis: “I had a great time talking about my English major with students and passing on what wisdom I’ve acquired over the last 20 years I’ve been in the working world.”

Kate Porter: “Incredibly eye opening. I wish I had had something like this when I was going in to a career. It would have been so helpful.”

Taylor Sledge: “There are no limitations for our major. The major that you choose, the degree that you have, is just one tool for your career in your life. My connection with everybody for this whole event is that the English department is cultivating experts in the human condition. People know how to communicate, they’re more passion driven, and it’s not this quantitative mess of, “well I have this degree so I can do this job.” I love the open architecture of the thoughts of all these people.”

Mariah Cole Williams: “I was pleased to meet current students at Ole Miss. The English department is doing a wonderful job opening doors and exposing current students to options after graduation, because there are so many. When I was in school I didn’t realize I could do a slew of things, and so I think it’s really important.”

Kimbrely Dandridge: “The students were engaged and interested to know more about our career paths and what we do day to day.”

Kent Jackson: “I was blown away by the impressive English majors and graduates and I really enjoyed it.”

Campbell McCool: “It is impressive that the English department is connecting undergrads and alums. It didn’t happen when I was an undergrad, and I wish it had. This is a brilliant idea and will further attract people to Ole Miss’ already stellar English program.”

Lindsey Neyman: “This program is incredible. I wish it had been here when I was. Connecting alumni and students is just helpful and inspiring.”

Nicole Tisdale: “The only thing I don’t like about this event is that it didn’t exist when I was in school here. It was so encouraging to see the students, and I hope we helped them understand that it’s not what you can do with your English degree; it’s what you can’t do. It’s much easier question to talk about the things that you can’t do with an English degree than to tell you all the possibilities. Most of the students are more prepared than a lot of the people that we see in DC every day looking for jobs. They need a little encouragement and people to show them, “I was here; I was in a similar place, and you can do the same thing.”