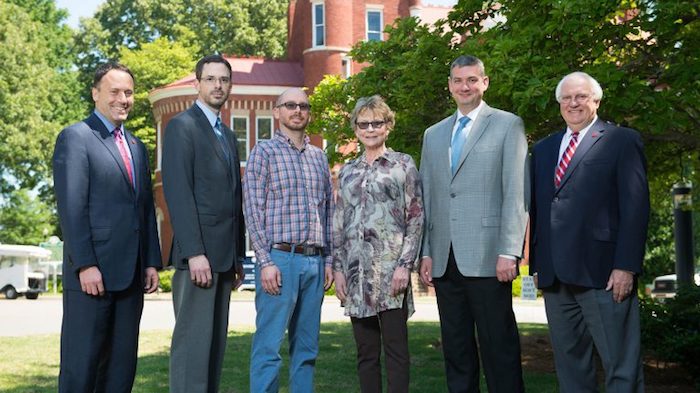 Eight faculty members in the University of Mississippi’s College of Liberal Arts have been recognized for their creative research and scholarly activity during the 2017-18 academic year.

The awards, both of which are in their second year of existence, include medals and stipends of $1,000 and $2,000 respectively. They were presented May 12 during the college’s Commencement exercises.

The Edmonds Award is presented annually to untenured, tenure-track professorial rank faculty members who are within six years of their initial academic appointment and who have demonstrated exemplary performance in research, scholarship and/or creative achievement. Recipients of the Award for Research, Scholarship and Creative Achievement have achieved scholarly recognition and influence well beyond the university.

“The eight people who were selected for these awards come from a diversity of disciplines,” said Charles Hussey, associate dean for research and graduate education and professor of chemistry and biochemistry who served as chair of the selection committee.

“This fact alone is a testament to the quality and strength of the research, scholarship and creative activities that can be found among the entire faculty community. These award recipients are among the very best scholars at the University of Mississippi, and we celebrate their success.”

The first African-American female tenure track professor hired in the Department of Chemistry and Biochemistry, Watkins received a prestigious National Science Foundation CAREER Award for $499,593 for work she has completed at the university, her creative ideas for future research activities and her strong teaching credentials. Her most recent research endeavors received $95,000 in joint support from the United Negro College Fund and Merck. 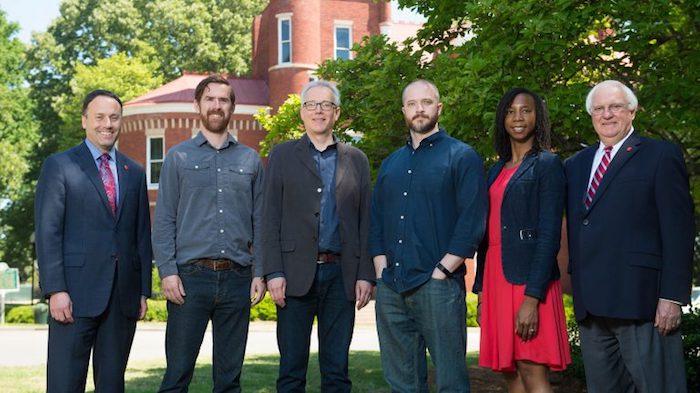 Peattie, an assistant professor of music, is an internationally recognized expert on the music of Austrian composer Gustav Mahler. His distinguished publication record includes a monograph, a book on Mahler, four peer-reviewed articles and a review in some of the most respected journals in the field of musicology.

He is completing a second book on Italian composer Luciano Berio and two book chapters on Mahler. Pettie is also a frequent speaker at peer-reviewed national and international music conferences.

Described by sociology colleagues as a “rock star,” Thomas has written three academic books and seven articles accepted or in print in peer reviewed journals. The assistant professor of sociology and anthropology has received funding from the prestigious Fund for the Advancement of the Discipline Program, College of Liberal Arts Summer Research Grants and an Office of Research and Sponsored Programs Investment Grant.

An invited panelist at national, regional and local conferences, Thomas also serves as an editorial board member for two important journals in the field: Contexts and Sociology of Race and Ethnicity.

An assistant professor of history and Southern Studies, Grem is the author of a celebrated monograph, a co-edited volume and six peer-reviewed articles. A panel chair at the 2017 national Business History Conference, he oversaw two hires in the Department of History and is working on his second manuscript.

Hammer, an associate professor of chemistry and biochemistry, has served as principal investigator on five grants from the National Science Foundation totaling more than $7 million. These include an NSF CAREER Award, a Research Experiences for Undergraduates Site and a major instrumentation award. He served the state’s National Science Foundation EPSCoR program as Track 1 senior personnel and program architect and Track 2 program director.

With collaborators at Wake Forest School of Medicine and Massachusetts General Hospital, Smitherman, an associate professor of psychology, has led the way in debunking myths about the factors that trigger headaches. His publication record includes more 65 peer-reviewed articles, a book, a lead-authored book and nine book chapters.

Smitherman is a fellow of the American Headache Society, associate editor of Headache and a consultant to the National Institutes of Neurological Disorders and Stroke of National Institutes of Health. The only psychologist on the Medical Advisory Board, he has been supported in his research by the Migraine Research Foundation, American Headache Society and Merck Pharmaceuticals.

Director of the university’s Center for Population Studies and a professor of sociology, Green has held many elected positions, including president of the Southern Rural Sociological Association and former editor-in-chief of the Community Development Society’s official publication. Green has secured 11 grants and contracts, increased the center’s staff, added undergraduate and graduate research assistants and added 10 affiliated researchers from within and outside the university.

Last year, he became a team co-leader and steering committee member of the Community Wellbeing Flagship Constellation, one of four priority research areas selected by the university for investment and further development as part of Chancellor Jeffrey Vitter’s strategic vision.

A professor of theatre arts, Justice-Malloy is a member of the National Theater Conference, which has only 150 members selected through a strict nomination process. She served as president of the Mid-America Theater Conference and was recently inducted as a fellow.

Justice-Malloy’s record of research spans many years and includes articles in Continuum:  The Journal of African Diaspora Drama, Theatre and Performance, and in Theatre History Studies. She co-edited and contributed a chapter to the book “Enacting History.” Besides her strong publication record, Justice-Malloy also has s significant record of presentations both domestically and internationally.

This year’s honorees are exceptional, and their work reflects the goals for which the awards were created, said Lee M. Cohen, dean of the College of Liberal Arts and professor of psychology.

“As a Carnegie R1 university, it is important that we publicly recognize and reward our most productive faculty for their sustained efforts in research, scholarship and creative achievement,” Cohen said. “I hope the recent establishment of these awards will help us to elevate our productivity moving forward.”