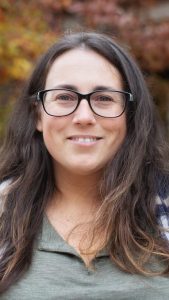 University of Mississippi doctoral candidate Amber Hodge has received a Lillian Gary Taylor Fellowship in American Literature, which funds a month of research at the University of Virginia’s expansive academic libraries.

Hodge, who is working toward a Ph.D. in English literature with a graduate minor in gender studies, will continue work on her dissertation, titled “The Meat of the Gothic: Animality and Social Justice in United States Fiction and Film of the Twenty-First Century.” She argues that 21st century Gothic writers and filmmakers deploy the genre as a means of revealing social stratification that begins with the division between humans and nonhuman animals, a distinction she believes underlies all other forms of oppression.

A native of Honolulu, Hodge said access to the archives of Gothic literature and famous manuscripts in Charlottesville will be invaluable to her work to study the underlying meaning of humanity as it is assumed in Gothic works.

“A lot of people argue that distinction between the human and the animal is the underlying distinction for all other forms of inequity,” Hodge said. “The only reason we are able to say anyone is less than us is they are an animal in some way. Basically, that is what I am doing, talking about the nonhuman part of Gothic literature.”

Jay Watson, UM Howry Professor of Faulkner Studies, and acting chair of the Department of English, noted that the Lillian Gary Taylor Fellowship is sought after because it sponsors archival research at one of the nation’s great academic libraries, the Albert and Shirley Small Special Collections Library.

“Over the years I’ve had several professional colleagues who have worked in the Faulkner archive at UVa as Taylor fellows, and it’s a real feather in Amber’s cap that she will be joining their ranks while still a Ph.D. candidate,” Watson said. “That’s a tribute to the originality and timeliness of her research.”

The fellowship supports research in the literary works for authors-in-residence. Their proposals may cover any time period or genre, and may be bibliographical, biographical, critical, historical or textual in focus.

The Small Special Collections Library is home to one of the world’s most comprehensive holdings of American literature and literary manuscripts, including the Clifton Waller Barrett Library of American Literature, the Taylor Collection of American Best-Sellers and many famous authors’ papers.

Hodge’s dissertation has a chapter on African-American feminist revisions of William Faulkner’s “As I Lay Dying,” and all Faulkner’s manuscripts for the book are in the archives at UVa. Faulkner, the Nobel Prize-winning author and Ole Miss alumnus, taught briefly at the University of Virginia.

She is also interested in Thomas Jefferson’s slave records, which are in the archives. The Sadleir-Black Collection of Gothic Fiction, which contains more than 1,000 books, is another resource of interest.

Archival research is a passion of Hodge’s, so the chance to do it with funding is special, she said.

“You never really know what the competition is going to be like,” Hodge said. “Anytime you get one of these fellowships, that’s really exciting.

“The fact that they’re paying for me to do this is really exciting because if I could just go and do this for fun, I would.”