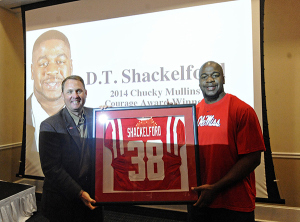 Shackelford with Coach Freeze after being honored with the 2014 Chucky Mullins Award during a reception on April 5, 2014. | Photo by Thomas Graning

Shackelford, who was the first junior to receive the award in 2011, was honored again by the Ole Miss coaching staff during a breakfast ceremony, presented by the M-Club, celebrating the 25th anniversary of the award prior to the Regions Bank Grove Bowl.

The award, sponsored by Phi Beta Sigma fraternity, honors the late Chucky Mullins, who had his Ole Miss career come to an end during the 1989 Homecoming game against Vanderbilt when he was paralyzed after making a tackle. After returning to his studies at Ole Miss, Mullins passed away May 6, 1991.

Shackelford was selected from among several veteran defensive players by head coach Hugh Freeze and the Rebel coaching staff. The award is presented annually to an Ole Miss upperclassman defensive player that embodies the spirit of Mullins – courage, leadership, perseverance and determination.

Few student-athletes could embody those characteristics better than Shackelford. The Decatur, Ala., native has been awarded a sixth year of eligibility by the NCAA after he missed the entire 2011 and 2012 seasons due to knee injuries. In his two-year absence, he remained a vocal leader on the team and then returned to play a key role at both linebacker and defensive end last year. He is running with the first team at middle linebacker this spring.

“The impact that those two knee surgeries had on me, I kind of took on that spirit that Chucky displayed every day in the training room and different things I did. I never knew I would have that kind of connection with him,” Shackelford said after accepting the award Saturday.

“(My goal) was never just to come back. It was to come back and be something special and strive to be great on a daily basis, with the help of my teammates, coaches, family and all these different people that helped me in those two years. The first award I received on crutches. I was in tears, because I was ready to play, but it wasn’t my time to play. It’s the little things I’m able to appreciate now.”

“We had three guys that we felt were very deserving,” Freeze said. “We probably had more quality candidates this year than in the past couple of seasons that I’ve been here. I think (Shackelford) exemplifies the spirit and heart that Chucky did, and off the field the things he’s done, there’s no question he exemplifies it.”

Shackelford enters his final season as a Rebel with a laundry list of recognition both on and off the football field. As a player, he was an SEC All-Freshman pick way back in 2009 and was most recently honored on ESPN.com’s SEC All-Bowl team after the Rebels’ 25-17 win over Georgia Tech in the 2013 Music City Bowl. In three seasons, he has compiled 112 tackles with 18.5 TFLs and 7.0 sacks.

Off the field, he is one of the school’s most recognizable personalities and has been a campus leader in the area of community service. Among his many charity efforts have been pre-college counseling during the summer, numerous speaking engagements and mission trips to Panama and Haiti. He earned his bachelor’s degree in history in May 2012 and has nearly completed his master’s in education.