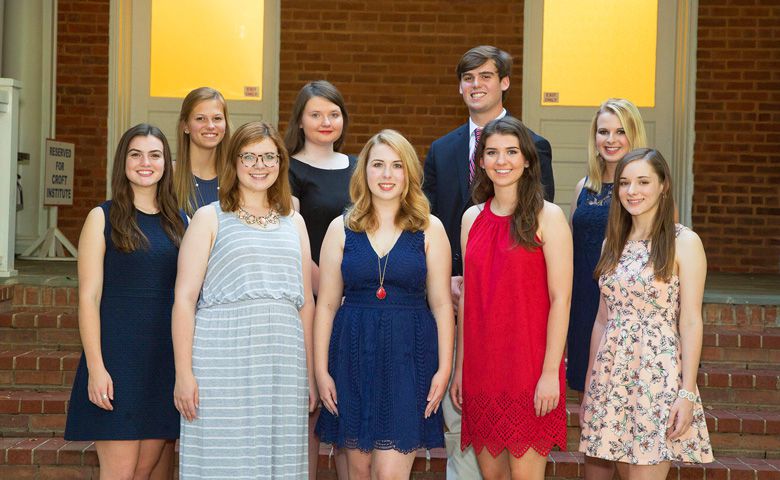 The University of Mississippi Croft Institute for International Studies has welcomed eight incoming freshman Croft Scholars to campus as part of its largest and most highly qualified class to date.

This year’s Croft Scholars, all of whom major in international studies, are Joey Baker of Decatur, Alabama; Kylie Bring of Chesterfield, Missouri; Marli Bryant of Collins, who is double-majoring in pre-med; Summer Caraway of Madison; Jessica Flynn of Alpharetta, Georgia; Olivia George of Biloxi; Christina Pendergrast of Marietta, Georgia; and Emma Rice of Tupelo.

Each freshman Croft Scholar also receives an $8,000-a-year scholarship, totaling $32,000 during their time at Ole Miss, which they can combine with other scholarship support.

The Croft Scholars are joined by one sophomore, Lauren Newman, who was awarded the Rose Bui Academic Excellence Scholarship this year. This scholarship for academic excellence, valued at $8,000 per year, is awarded annually to the top rising sophomore who does not already have substantial scholarship support.

“Within an outstanding entering class, our largest and most accomplished yet, the eight students selected as Croft scholars distinguished themselves through their academic credentials, their performance in the scholarship interview and their commitment to becoming global citizens,” said Oliver Dinius, Croft executive director and associate professor of history. “We are proud to have them represent the institute.

“We also welcome Lauren Newman, the recipient of the Rose Bui Scholarship, to the exclusive group of students with major financial support from the institute. She earned that honor through dedication and hard work in her first year in the program.”

The incoming Croft cohort comprises 73 freshmen, boasting an average ACT score of 31.38 and a 3.85 average GPA and representing 16 states, plus Japan and Australia. The continuing increase in high-ability students seeking degrees from the Croft Institute is one of several reasons that prompted the Joseph C. Bancroft Charitable & Educational Fund – which has invested more than $44 million into the program – to provide a new $5 million commitment this year, ensuring students are equipped with knowledge and perspectives to embrace opportunities on the world stage.

“This cohort is unique in a lot of ways, but the fact that we enrolled our largest Croft cohort to date, as well as increasing our average overall ACT to 31, was exciting,” said Will Schenck, the institute’s associate director.

Bring graduated in the top 10 percent of her class in Missouri while staying active in student council, National Honor Society and Mu Alpha Theta. She received recognition as an AP Scholar, Missouri’s Bright Flight award for scoring 31 or higher on her ACT and the President’s Award for Educational Excellence. She is double-majoring in international studies with a focus on Arabic in the Middle East and mathematics, with a plan to double-minor in Arabic and intelligence and security studies. Her goal is to study abroad in Jordan and intern in Washington, D.C.

“The professors are truly invested in helping us grow as both scholars and people, and my fellow students have created a wonderfully supportive family atmosphere.”

Baker is combining his international studies major with Chinese and accountancy with a goal of working in either the private sector or government.

“I chose Croft at Ole Miss because it has a prestigious reputation and gives students the necessary skills to go on and pursue successful careers,” Baker said.

Each year, around 20 students are selected to interview with a panel for Croft scholarships, which are awarded based on each student’s knowledge of current global political issues and their interest in the international studies program.