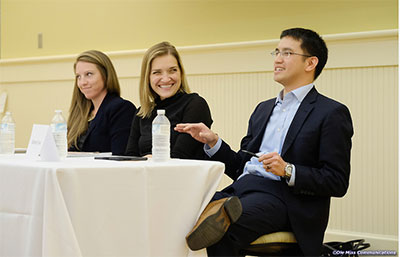 Last autumn, the Croft Institute for International Studies welcomed back three former students to interact with current students. Jessica Bryant (2007), Anthony Yuen (2008), and Erin Callahan (2010) spoke about their careers and shared insights about realizing their professional goals. They all earned similar graduate degrees, but now use their skills working in the government, private, and NGO-sector, respectively, which made for an interesting contrast.

Jessica completed an MA in international affairs at George Washington University and has spent over six years working for the USAID Office for Transition Initiatives, with assignments in Afghanistan, Haiti, and Mali. She currently serves as a senior transition adviser for the agency in Washington, DC.

Anthony was a Chinese Language Flagship student and completed the Capstone program in Nanjing before earning an MA from the Georgetown University School of Foreign Service. After internships with the US Department of State and the Treasury, he was hired by PricewaterhouseCoopers, where he has worked since 2012 in corporate intelligence.

Erin entered the Bologna Program at Johns Hopkins’ School of Advanced International Studies and earned her MA in international affairs in 2012. After working in the government sector in Washington, DC, she moved to New York in 2014 and joined CDP–Global Environmental Reporting System, a non-governmental organization helping private companies set climate goals.

All three panelists were academically excellent students with major scholarships—Jessica and Anthony were Croft Scholars, and Erin a Barksdale Scholar—but in their presentations they emphasized the importance of seeking opportunities beyond the classroom to distinguish themselves. In particular, they highlighted the impact of completing internships during their studies and/or immediately after graduating, which helped them gain important professional experience that employers value.