Come Roll With Me

UM student brings support, awareness to obstacles of life in a wheelchair though advocacy group 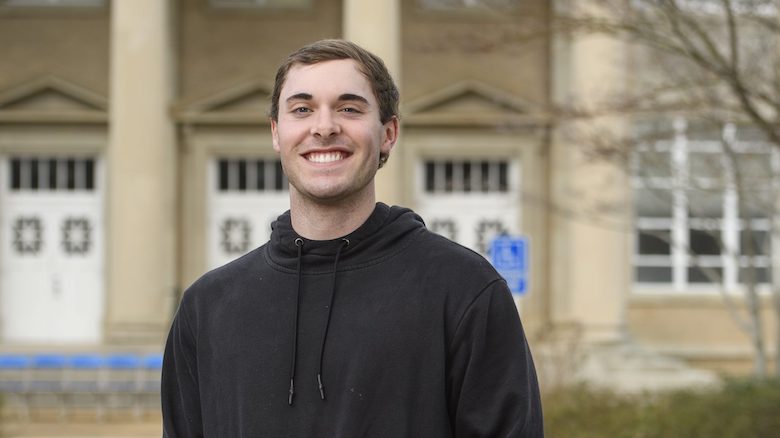 Reid Fracchia, a senior biochemistry major from Jackson, launched the Come Roll With Me program at the University of Mississippi after learning about the original program in Alabama through Facebook. He hopes to build awareness of the handicapped community on campus and throughout Oxford. Photo by Thomas Graning/Ole Miss Digital Imaging Services

Reid Fracchia, a senior biochemistry major from Jackson, brought the Come Roll With Me program to Oxford in hopes of bringing more awareness to the handicapped community.

“My mom is physical therapist and I would always have so many questions to ask her when she came home from work,” Fracchia said. “Then, once I had an interest in going to medical school, I started to think about how I could make a difference in the community as well.”

Cathy Carver, a physical therapist in Alabama, started the program in 2016 and soon after, Fracchia stumbled upon the Facebook page for the group. He thought that it would be a great program to bring to Oxford and the University of Mississippi because it seemed like a perfect opportunity to make a difference.

“My parents always raised me by the golden rule,” Fracchia said. “They always said, ‘Treat others the way you want to be treated,’ and that is something I try to live by every day.”

The people the group serves have so much appreciation for the program, Fracchia said.

Thomas Guest was injured in an ATV accident that severed his spinal cord and left him paralyzed from the chest down in 2017. He’s had a long road to recovery since being injured during his freshman year at Mississippi State University.

“The injury affects every part of my life but I strive to do the best that I can do with what I have,” Guest said. “I returned to college as a sophomore last year and currently continue to focus on school and campus involvement.”

His initial reaction to finding out that he was paralyzed was complete shock. But from the beginning, he had an overwhelming drive to overcome the hardships of this injury.

“Some days are harder than others, but every day, I work on getting better at what I can do and give my best to keep a positive attitude,” Guest said.

Before the university canceled all on-campus activities because of the COVID-19 crisis, Come Roll With Me was meeting a couple of times a month in front of Fulton Chapel. Usually, a member of the group who isn’t wheelchair-bound would talk about the importance of the program and how it helps bring awareness to the handicapped community. They then would ride around campus in wheelchairs alongside those who need them.

This helps them put themselves in the shoes of those who need the chairs every day.

Programs such as Come Roll With Me have helped Guest, who is in a wheelchair, to be more involved around his community and find friendships.

“The Come Roll With Me program is incredible,” Guest said. “It has brought education and awareness to people that wouldn’t know otherwise. I think it is an amazing program and is changing the communities around us.”

UM alumnus Cameron Stubbs also has played a major role in Come Roll With Me. Stubbs was injured in a shallow diving incident and works to help others in similar situations. The Jackson resident is happy to see the program here.

“I was injured in a shallow diving accident on spring break in 2003,” Stubbs said. “A large group of my fraternity brothers booked our last spring break trip to Nassau, Bahamas. I’m 6-foot-5 and dove into a 3-foot pool in the dark, unknowing the depth.”

Stubbs is considered a quadriplegic because his injury affects all four limbs.

“For the first two years I was determined to walk out of rehabilitation, but that day never came,” Stubbs said. “It was then that I decided to move forward with my life and live it how I wanted to. My education was very important because I knew the road ahead would be difficult, even more so with a disability.”

“I’ve learned through my experience that in order to change society and the status quo, you have to start with our youth and young adult population.”

Far too many times, Stubbs has seen efforts fail due to people not willing to change their behavior in society or employment.

“Being able to alter preconceived perceptions at a young age allows for a more inclusive thought process as the young grow into adults and become decision makers,” Stubbs said.

Even though Reid Fracchia is a senior, his younger brother Owen Fracchia, a freshman exercise science major from Jackson, is planning on continuing the program at Ole Miss once on-campus activities resume. He believes it is extremely valuable in helping people understand the plight of those who aren’t able to walk.

“Once people take part in this program, they can be more comfortable around people with disabilities and will have a newfound respect for their struggles,” Owen Fracchia said. “They can see that those with physical disabilities are just as capable as any of us, and to see life from a different perspective can be very eye-opening.”