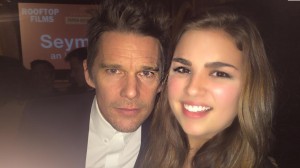 Few places become the backdrop for films as much as New York, and a University of Mississippi class traveled there during spring break to better understand how the city is portrayed in movies.

The 300-level class, taught by Alan Arrivée, assistant professor of cinema, and Timothy Yenter, assistant professor of philosophy, is made up of Sally McDonnell Barksdale Honors College students. The class covers the portrayal of the city, from the early days of film in the 1920s to the years since the terrorist attacks of Sept. 11, 2001.

“The idea was to not only have students watch the films together, but talk about them and read what people from a wide variety of disciplines have to say,” Yenter said. “We want to see what novelists have to say, what film critics have to say and what film scholars and historians of culture have to say. We’re reading widely in order to get a sense of what others have brought to the discussion and also what we can bring to it.”

The class examines why so many films are set in the Big Apple. The representations of race and class in different genres is also part of the curriculum. The professors encourage students to reflect on whether they see themselves represented in the films and whether they see places they recognize.

“The two most obvious things that have come up in class are questions of how is space represented as being in New York City and in what way New York is represented as it was during the time of filming,” Arrivée said. “We also want to know in what way was New York artificially constructed to serve the plot, the theme and the goals of the filmmakers. Then, on top of it all, what incredible changes have taken place in the reality of the city over the course of the films we are studying.”

The Honors College provided funding for the course and the trip. It also funded another class this semester, which explored ethical issues surrounding antiquities and which also went to New York during spring break. The two special topics classes were the fruit of proposals for classes submitted by professors.
The Honors College tried the concept in 2013, and the winning proposal focused on the World Cup. Six Honors College students traveled to Brazil for the event in 2014.

“They not only saw New York and screened various films while they were up there, but they also met with film directors and others involved in the industry,” Samonds said. “We’re always so excited to be able to support endeavors like this. This kind of opportunity is one of many characteristics about the Honors College that we think makes this a very vibrant and attractive honors college.”

Rachael Cooper, a junior English major from Olive Branch, said the class has given her the chance to watch and analyze great films such as “On The Town” and “His Girl Friday,” which she might not have seen on her own. And the chance to see the places they were filmed has been invaluable.

“The New York trip allowed me to conduct hands-on research for my final project and also give me free time to explore the city and see some landmarks and locations from film and television,” Cooper said. “I think you develop a new appreciation for the famous and lesser known spaces in the city made famous by the films once you’ve had a chance to stand in those spaces yourself and see how huge, or tiny, they are in reality.”

Sean O’Hara, a junior computer science major from Jackson, said what stood out to him on the trip was the powerful attraction people have to the city and how that force pulls them to move there.

“For me, it was the interplay between the magnetic and idiosyncratic qualities of the city,” O’Hara said. “Almost everyone I met on the trip was from somewhere other than New York, but some unifying thread seemed to have brought them all together. I relate to that in many ways, and I think it’s just an innate quality of New York in that it embodies this perfect mess of society. It’s this ultimate icon for America’s beautifully random hodgepodge of people and culture.”