Research could open door to transforming carbon dioxide into energy 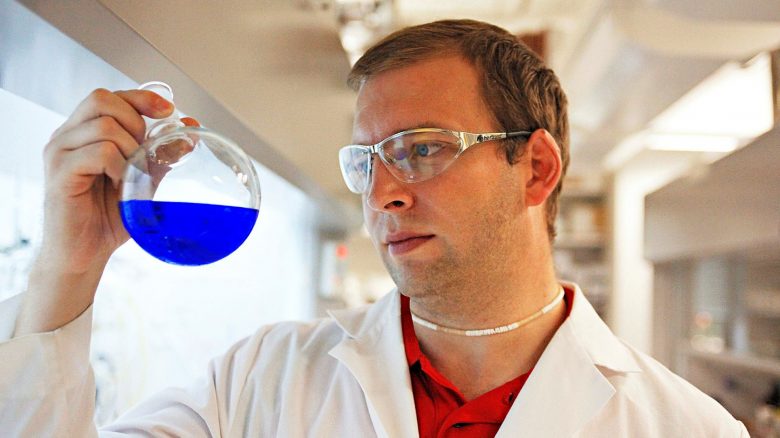 Jared Delcamp, an associate professor of chemistry and biochemistry, has received a National Science Foundation award to explore novel materials that could unlock a future sunlight-driven energy infrastructure. Submitted photo

A University of Mississippi chemistry professor is exploring novel materials that could unlock a future sunlight-driven energy infrastructure.

Using a recent National Science Foundation award, Jared Delcamp is researching how new types of metal catalysts, or materials that speed up chemical reactions to allow practical access to fuel, can be applied to turn the greenhouse gas carbon dioxide into a usable fuel primarily using sunlight.

Delcamp, an associate professor of chemistry and biochemistry, is principal investigator on the award that includes researchers from two other Southeastern Conference universities.

“Ideally, the exhaust from cars and electric production plants and such carbon dioxide generators could be used directly with a catalyst and sunlight to generate a fuel,” said Delcamp, who joined the UM faculty in 2013. “This is what nature is doing with plant life via photosynthesis to make more plants.

“We aim to use these catalysts as part of an artificial photosynthesis system to make fuels as a long-term goal.”

According to NASA, carbon dioxide is “an important heat-trapping (greenhouse) gas, which is released through human activities such as deforestation and burning fossil fuels, as well as natural processes such as respiration and volcanic eruptions.”

The researchers hope their exploration will lead to the production of solar fuels from a greenhouse gas in a carbon-neutral fashion.

“Dr. Delcamp has assembled a formidable team with a powerful combination of complementary expertise,” said Greg Tschumper, UM professor and chair of chemistry and biochemistry. “It is very exciting to see NSF invest in this collaborative effort and their incredibly important research that has the potential to turn a nonrenewable fossil fuel like gasoline into a sustainable solar fuel via a process that also consumes an unwanted greenhouse gas.”

While using sunlight to create fuels as stored chemical energy available on demand is attractive relative to the world’s current fossil fuel-reliant infrastructure, to do so requires fast, durable and selective catalysts made from readily available and affordable metals, where feasible.

And while carbon dioxide can be turned into fuel without a catalyst, the loss in energy during the transformation is so great that it is impractical. The researchers are working toward designing more efficient, robust and selective catalysts that are practical.

“There are about four steps to get a catalyst into an artificial photosynthesis system, and it requires two different catalysts,” Delcamp said. “We are hoping to move very close to the final step for the catalyst we are studying, which would be about half the puzzle needed for a carbon dioxide-to-fuel system powered by sunlight. 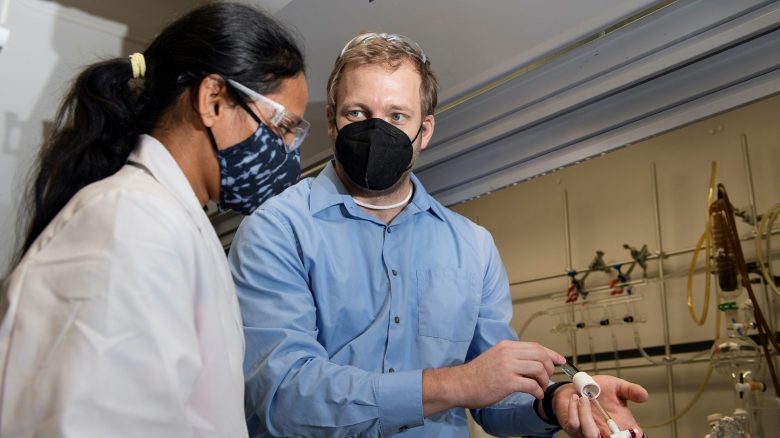 “A catalyst changes the reaction pathway from carbon dioxide to fuel to avoid large energy penalties so fuels can be made faster. It’s like having an expressway to the product as opposed to a much longer dirt road.”

Working with Delcamp and serving as joint principal investigators on the award are Elizabeth Papish, a chemistry professor at the University of Alabama, and Charles Edwin Webster, a professor and associate department head in the Department of Chemistry at Mississippi State University.

The research collaboration grew out of a former NSF Established Program to Stimulate Competitive Research program that the trio worked on together. While involved with that grant, the researchers realized that combining forces could substantially speed up the work on their common interest of transforming carbon dioxide into fuel using sunlight.

“Liz and Edwin do very complementary types of research that fit together well to efficiently move a project forward,” Delcamp said. “Liz does exceptional work in synthesizing the catalysts. My team focuses on using sunlight to power them and detection of the products that are made. Edwin works computationally to help understand the outcomes and predict new exciting targets.

“Together, we can move very efficiently within our specialties while relying on each other’s expertise to keep the project cutting edge.

“Continuing on this path toward practicality with the systems we’ve discovered and been studying for the past few years is exactly what I hope for as a scientist. Getting such a positive signal from NSF that they are interested as well is just very exciting.”

The three professors’ project also includes training a diverse group of 10 to 15 undergraduate and graduate students.

These students are the key to future discoveries and technologies and progressing science, and can expand upon the groundwork of the professors involved with the project, Delcamp said. And when it comes to going all-in on science and exploring solutions to real-life problems, time is an issue when there are so many options open for investigation.

“There are a lot of roads to travel that all look attractive,” Delcamp said. “We need students who are going to push forward in their careers to accelerate the discovery process by trying some of these other exciting roads. Training students is one of the most important things we can do with our time. It is a huge investment in their futures since there is so much one-on-one time, but it is absolutely worth the investment.

“We’ve all had students go on to do amazing things from our relatively young groups and contribute solutions to some amazing problems. Seeing this happen is intensely motivating and beneficial to society as a whole.”

Delcamp, Papish and Webster also will conduct outreach events and host high school students in the research laboratories, and the undergraduate students involved in the project will perform catalytic reactions in a teaching lab setting.

This will offer educational experiences along with experiment verification.

It’s critical for researchers to reach out to their communities so potential students know about these kinds of research projects and can see the faces of people tackling grand research challenges, Delcamp said.

“Young students often see science as something too challenging and abstract that is only for very certain people,” Delcamp said. “It is amazing to see the transformation in the perception that happens when the problem is broken down in a way that is understandable, and students can see others not much older than them that are making a difference.

“It is enabling to high school students to reach a point where they realize that they could make a difference toward society through science, and that they have the potential to cause that change in a way they hadn’t considered.”

Outreach into the large community is important as well, Delcamp said, as the public’s perception of science matters tremendously.

“The community is ultimately the folks that get to decide what is and isn’t important to keep pursuing with funding,” he said. “I think it is very important to let the community know about projects like this one where there is a clear target: secure our energy future by designing carbon dioxide to fuel conversion catalysts.

“This creates a ‘carbon loop’ where we can still maintain our infrastructure with current fuels, only we would be able to recycle the waste generated into fuels as well. Driving this process with sunlight leads to a system that could run perpetually, and concerns about oil availability would diminish. Things like this are a huge gain to society, and it is ultimately the public that drives the decisions to keep programs like this moving forward.”

Funded with the support of the Chemical Catalysis Program in the NSF’s Division of Chemistry, the award, No. 2102511, is titled “CAS: Collaborative Research: Macrocyclic and Supramolecular Pincer Catalysts Using Ruthenium and First Row Metals for Carbon Dioxide Reduction.”