Caring for the ‘Heart of the University’

Friends of the Library celebrates 75 years 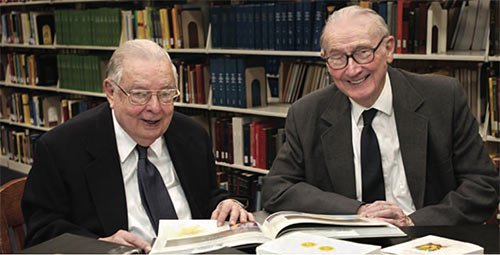 Beloved English professors, John Pilkington (left) and Charles Noyes devoted countless hours to the Friends of the Library’s cause.

What a school thinks about its library is a measure of what it feels about education,” educator Harold Howe II wrote. Two forces of nature – the late University of Mississippi English professors John Pilkington and Charles Noyes – were instrumental in helping to define what the UM family thinks about the J.D. Williams Library and were relentless in building support to purchase books and an array of other library resources.

“A library is the absolute heart of a university,” Noyes said on numerous occasions.

Many who have joined Friends of the Library, the support organization for the J.D. Williams Library, established in 1940, did so out of their great affection for Pilkington and Noyes. However, the two professors passed on the belief that we all have a responsibility to strengthen the university’s library. And now, new generations of alumni and friends have taken up the mantle of building support, and Friends of the Library is observing its 75th anniversary.

The Friends of the Library’s endowment is nearing $1 million, with annual income enhancing library assets. For decades, the organization has purchased library resources to meet the needs of students, faculty, researchers, staff and other patrons. Records show that during a calendar year, the Friends may purchase as many as 4,800 new books or resources for the J.D. Williams Library, with purchase decisions made from librarians’ recommendations and employees, students, and faculty members’ requests.

Carole Lynn Meadows (BSC 60, MBEd 64) of Gulfport, a former Ole Miss Alumni Association president, heads up the committee that has planned Friends of the Library anniversary events, which have included coffee receptions for UM administrators, faculty and staff to encourage them to join the organization. Also, the Ole Miss Alumni Association, a longtime library supporter, annually gives a $50 gift to honor each faculty and staff member with 25 years of service, resulting in a gift of a couple thousand dollars to the Friends organization. The association increased the amount to $75 to help mark the 75th anniversary.

“If you described the whole university as a wheel, the hub would be the library,” Meadows said. “Supporting this hub is no longer just about purchasing books; we have to attract funds for an array of technological resources that our students need to succeed in their classes and to increase their understanding of the world.

“Being part of the Friends organization is a great way to give back; it’s an outlet for the tremendous appreciation and love I feel for the university. … I am compelled to find ways to strengthen the university for future generations and encourage others to join this effort.”

Anniversary events will continue through early 2016, with a holiday party planned for Friends of the Library members and a special event in the library’s Archives and Special Collections. Alumni and friends are encouraged to become involved members, enjoy the social aspects of membership and provide library support that’s needed more than ever.

The anniversary observance, of course, includes a tribute to professors Pilkington and Noyes.

“They are monumental figures at our university,” said Stephen Monroe (MS English ’03, PhD ’07), assistant dean of the College of Liberal Arts and president of the Friends of the Library. “These two men were devoted scholars, teachers and servant leaders. Their commitment to the library, in particular, is an ongoing inspiration.”

Monroe said those involved in the Friends of the Library today are carrying on the tradition of dedication and service established by Pilkington and Noyes.

“We have strong, energetic board members,” Monroe said. “Together, we’re working to increase overall membership and to raise our endowment above $1 million.”

This Friends’ support continues to make a world of difference in the lives of Ole Miss students by enhancing the J.D. Williams Library. Open 109 hours a week and 24/7 during the last three weeks of each semester, the library is usually packed with students. In addition to more than 2 million volumes, the library boasts several special collections and such features as individual and group study areas, exercise bikes for study breaks and a Starbucks coffee shop – where the line is always long.

“We are so grateful for the longtime support of the Friends of the Library,” said Julia Rholes, dean of libraries. “The J.D. Williams Library is thriving because it offers students such strong resources; it also played a pivotal role in the university being chosen to shelter a chapter of Phi Beta Kappa (the nation’s oldest and most prestigious liberal arts honor society). Our growth and success would not be possible without the amazing support of the Friends.”

Library technology assists students with learning and research. More than 180 public computers and an array of software are available, such as programs that help students compute and solve mathematical formulas and equations; and produce, analyze and print graphs, data tables, text and histograms. A crowdfunding initiative recently attracted private gifts to fund Studioone, a video recording and digital editing suite in the library for students to practice making presentations, complete multimodal assignments, create e-portfolio introductions or tape group discussions.

Gifts of all sizes strengthen the library and are welcome beyond membership dues. The anniversary goal is to reach 100 lifetime members, and the Friends organization is halfway there. Those who would like to join Friends of the Library or support the UM Libraries can do so online at www.umfoundation.com/libraryfriends or by contacting Angela Barlow Brown, development officer for libraries, at ambarlow@olemiss.edu or 662-915-3181. The levels are students, $15; faculty and staff, $25; supporting, $30; contributing, $75; sustaining, $150; and life, $1,000. Friends of the Library members receive news about the library and invitations to Friends events.

Tina H. Hahn is director of communications for the Office of University Development and the University of Mississippi Foundation. A longer version of this article was published in the summer 2015 edition of the Ole Miss Alumni Review.