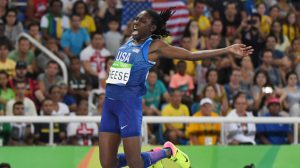 The world’s premier female long jumper since she turned pro after her 2008 junior year at Ole Miss, Reese came out to defend her gold medal from the 2012 Games in London. But despite an impressive leap of 7.15 meters (23-5.5), she was edged out by fellow American Tianna Bartoletta who claimed gold by two centimeters with a mark of 7.17m. Serbia’s Ivana Spanovic earned bronze at 7.08m, a national record.

Reese, a Gulfport, Mississippi, native who now lives and trains in San Diego, had only one fair attempt (6.79m) out of her first four, before a pair of huge distances in her final two – 7.09m and then 7.15m. Bartoletta won the competition on her fifth attempt with a personal-best 7.17m in a dramatic final two rounds of jumping.

“I’ve been through a lot these past two years emotionally, and physically battling back from surgery,” Reese said. “Today I kind of got off to a slow start and it costed me at the end, but I am really pleased to be on the stand again and represent the United States.”

It was part of a big night for the Team USA women on the track, who are coached by Ole Miss head coach Connie Price-Smith. The Americans went 1-2-3 in the 100-meter hurdles (first ever gold, silver, bronze for the U.S. women in any track & field event), while Mississippi native Tori Bowie earned bronze in the 200 meters.

Tony Dees won the other Olympic medal by a former track & field Rebel with his silver in the 110-meter hurdles in Barcelona in 1992.

That concludes Olympics competition for the program-best track & field contingent in 2016. Below are the complete results of the one current Rebel (Raven Saunders), one current volunteer assistant coach (Gwen Berry) and four former Rebels.

For complete coverage of Ole Miss in the Olympics, visit www.RebsInRio.com.