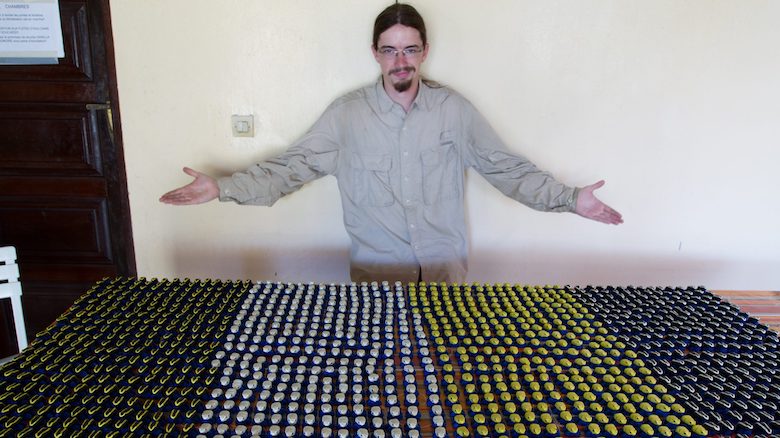 UM graduate J.P. Lawrence shows off clay models of dyeing poison frogs used in his work. He and a team of researchers began studying variations in color signals of the frogs in 2013 in French Guiana. The team has published its results in the Sept. 3 edition of Proceedings of the National Academy of Sciences. Submitted photo

The biology research of a multinational team, led by a University of Mississippi alumnus, has been selected for publication in a prestigious international science journal.

UM graduate J.P. Lawrence, a postdoctoral researcher of ecology and evolutionary biology at the University of California at Irvine; and Bibiana Rojas, Academy of Finland Research Fellow of biological and environmental sciences at the University of Jyväskylä, investigated how two color signals of poison frog exist when only one is expected to survive.

Their innovative study was published in the Sept. 3 edition of Proceedings of the National Academy of Sciences.

“PNAS is a very prestigious journal to be published in, with only a small fraction of studies being selected to be published,” Lawrence said. “The quality of the journal is known around the world. It is an excellent metric to show the top-caliber research being done at the University of Mississippi.”

Guided by UM biology professor Brice Noonan, the duo started their study in 2013 in French Guiana because several different populations of the dyeing poison frog occur in a relatively small area.

“These populations are differently colored, which is rather confusing,” Lawrence said. “The colors are meant to warn predators of the poisons that the frogs have.

“Traditional evolutionary thinking states that it’s much easier for predators to learn and remember few, distinct signals rather than many, so we don’t expect to see such variation. We wanted to see how natural selection was relaxed to result in this phenomenon.”

Lawrence and Rojas used a variety of lines of evidence to support their conclusions. They examined how predators view known and novel signals in the field, replicated those patterns in the lab and assessed how the frogs’ distastefulness affected predator behavior.

“Together, these results give us very strong evidence for why we see such perplexing phenomena in the wild,” he said.

Researchers have struggled to explain why such variation in animals with warning coloring exists. This is a phenomenon that is repeated in a number of different species.

“We provide a mechanism for how this variation can evolve,” Lawrence said. “As biologists, we’re often quite interested in how diversity arises, and we help explain that in this study.

“Furthermore, we also are often interested in how species form and evolve, and these initial changes in color and pattern are likely the first steps these populations take to become their own distinct species.”

Lawrence and Rojas’ study is already being praised by poison frog expert Kyle Summers, of East Carolina University, as having made “‘a valuable contribution to the field’ on a ‘topic of considerable current interest in evolutionary biology,’” with “important insights into aposematism (warning signals) and the methods used to study it.”