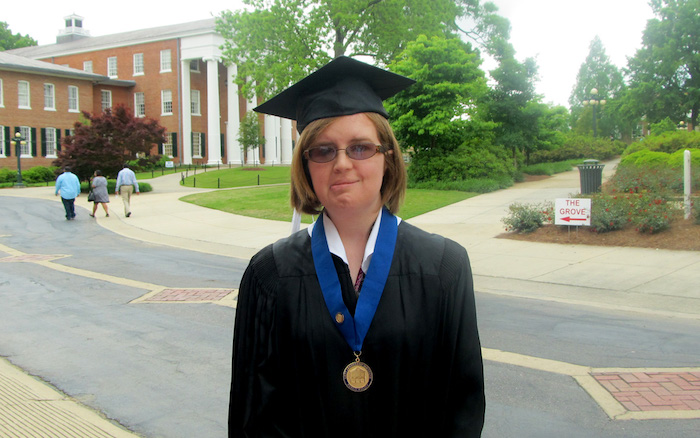 Several brain surgeries have left Abby Loden deaf, and she still has tumors on her brain and spinal cord, but she finished her latest round of chemotherapy in August and is pushing ahead with plans to run in the Great 38 Race, slated for Oct. 26-28 at the University of Mississippi.

Loden, a UM alumna from Fulton, isn’t an avid runner by any means. Her last brush with any extended jogging was when she played basketball in junior high school.

“I’ve never ran just to run,” Loden (BA public policy leadership ’12) said. “I feel like I’m fortunate with all of the other issues, especially with the spinal issues. Other people like me aren’t able to run.

“I am able to, so with that opportunity, I’m going to do it. If I like it, I will keep doing it.”

Loden began suffering hearing loss in high school and was diagnosed in 2005, when she was 16, with neurofibromatosis type 2. The condition is characterized by the growth of noncancerous tumors in the nervous system.

Throughout the difficult last 10 years, she has been inspired by the slogan “Never quit,” the motto of former Ole Miss football player Chucky Mullins, who was paralyzed during a game in 1989 but returned to the classroom in January 1991. Mullins died from complications from a blood clot in May 1991, but his courage and upbeat attitude were an inspiration to Ole Miss fans and the sports world alike.

While she was an Ole Miss student, Loden was a recipient of the scholarship, and she is eager to run this year to raise money for the fund. With her condition, she knows she shouldn’t put off anything. A few weeks after the race, she will undergo another round of radiation treatments.

“I have a tumor in my spinal cord,” Loden said. “While it is good right now, I have learned (that) with NF, anything can change in six months.

“I just want to do it while I know I have the opportunity to do it, instead of taking a chance and putting it off a year and not being able to if something comes up in six months.”

Loden’s battle with the condition began when an MRI for an unrelated situation revealed it. She waited on surgeries and struggled through the condition until she was nearly finished with college. The reasoning was that she wanted to have as normal a college life as possible and not struggle with hearing loss that would result from the operation.

The surgery carried risks, but not having it also was risky. Once she had no choice but to undergo the operation, she was out of school seven months, missing a summer term and a fall semester. She worried about losing the Chucky Mullins Scholarship, but it was there for her when she returned to campus.

The scholarship is important because having a disability creates lots of medical and related expenses for students, and battling a serious health condition makes it hard to keep up the grade-point average requirements of most other scholarships.

Loden is immensely grateful for everything the scholarship fund provided for her.

“I got back to Ole Miss in seven months, when they told me that I would never get back to college,” she said. “I used the scholarship. It was important to me.”

While at Ole Miss, she advocated for accessibility issues. People with disabilities face many small challenges that most people never think about, she said.

For example, the mechanisms that open and close doors on campus often had the tension set too tight for disabled students to operate. It was an easy fix, but it made a big difference, Loden said.

“People care and want to help, but unless you keep these issues in the discussion, people just don’t realize how small thing can make a huge difference in helping people,” she said.

Since she graduated in 2012, Loden has suffered a stroke and endured five more major surgeries. She battles issues related to dysfunction in the central nervous system, such as balance problems. Deaf due to her condition, she uses an iPad equipped with software that transcribes what people are saying so she can read it and carry on a conversation.

Still, she works as a sports coordinator for the Itawamba County Times. She covers three different high schools.

More than 480 runners have signed up for the Great 38 Race, and the group is on pace to surpass last year’s 800-plus entries, said Marvin King, race director and associate professor of political science, who taught Loden during her time at UM. Organizers hope that a big push in the weeks leading to the third annual event will improve upon the $5,000 it has risen toward scholarships for each of the last two years.

“What happens with races is it’s the same amount of work whether we have 5,000 people or 800,” King said. “If I’m designing a shirt, you just get more printed up, and we get more water and bananas, but it’s the same course.

“We’re trying to raise money for the Chucky Mullins scholarship, but with economies of scale, we’d be able to donate more. This scholarship supports a great cause.” 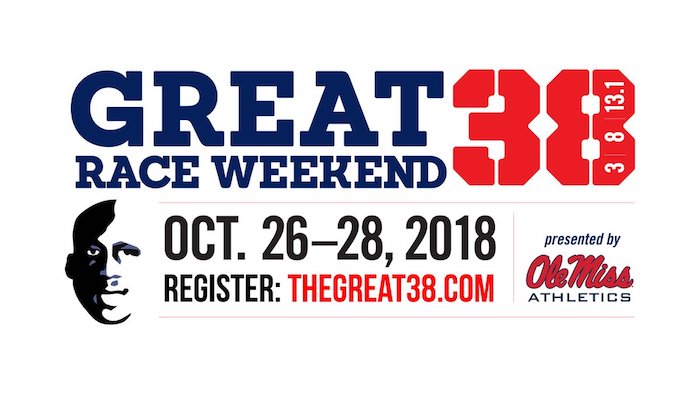 The top three male and female finishers in each of the races receive prize money, and those who run the 8-mile race or the half-marathon get a Great 38 Race medal.

The race sticks to the football theme. The route finishes at the 38-yard line of Vaught-Hemingway Stadium. The Ole Miss spirit squad will be on hand, and runners can see themselves on the video board as they cross the finish line.

The day before the race, an expo will feature activities designed to get kids excited about exercise.

Besides raising money for students in need, the goal of Run Oxford, which co-sponsors the event with the Department of Intercollegiate Athletics, is to promote healthy habits.

“The mission of Run Oxford is kid-friendly and getting kids interested in exercise, so that way they become lifelong runners,” King said.

The group still needs volunteers to work the day of the race, he said. For more information and ways to sign up, volunteer or donate, visit the Great 38 website.

As she gears up for the race, Loden bristles at the notion of being an “inspiration,” but acknowledges that she gets called one. She hopes running the race will encourage others to “never quit.”

“I don’t really understand why people say it,” Loden said. “But sometimes I think it’s because they don’t know when I’m having trouble or struggling with things. I came to look at it like if I can help somebody through what I’ve been through with NF, that helps makes it easier to deal with everything. Easier – it’s still hard.”