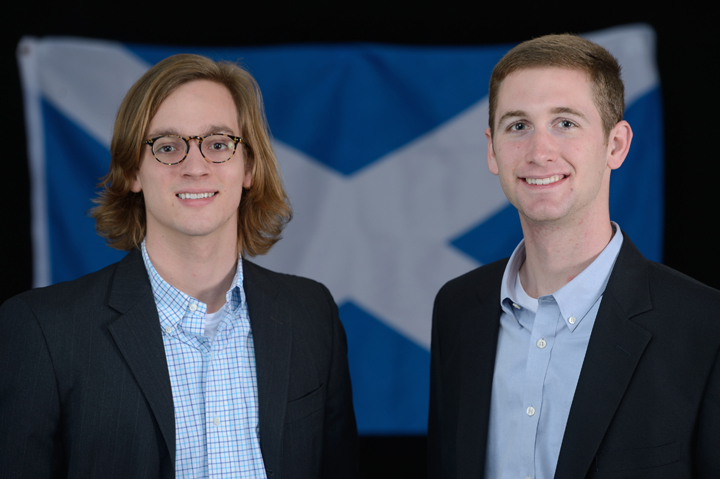 Two seniors spent the summer in Scotland pursuing their dreams.

Taylor Medalists Neal McMillin of Madison and Hunter Nicholson of Brandon are there using $5,000 Barksdale Awards from the UM Sally McDonnell Barksdale Honors College in pursuit of creative, courageous projects and ambitious, independent programs of study and research.

McMillin, a Newman and Barnard Scholar with a double major in Southern Studies and economics, is investigating Scotland’s pioneering use of the ocean for renewable energy.

Meetings with public officials, leaders in university environmental centers and renewable energy businesspersons and visits to key development sites will inform McMillin’s thesis about hydroelectric innovation in Scotland and the American South.

“My project juxtaposes the cultural significance of Scotland’s contemporary wave and tidal technology with the Depression-era South’s hydroelectric dams,” he said. “I will analyze the circumstances that contributed to the peculiar state of affairs in which these historically underdeveloped regions emerged as the vanguard of innovation in hydroelectricity.

“Through the venture and the thesis, I will gain perspective on the intricacies of humanity’s crucial relationship with water.”

Nicholson, majoring in accountancy, Spanish and public policy leadership, is in Scotland conducting interviews with business, political and academic leaders to understand the financial significance of independence. “Last fall, I went to Edinburgh to intern with the Scottish Parliament,” he said. “I happened to be placed with Stewart Maxwell of Glasgow, a member of the Scottish Nationalist party in charge of the Parliament. Their main goal is to make Scotland an independent country.”

The Trent Lott Leadership Scholar and finalist in PriceWaterhouseCoopers national case competition decided to return for in-depth research on the independence movement for his honors thesis. “There will be a referendum next fall and all Scots will vote on whether they want to be an independent country or not,” Nicholson said. “Who knows whether they will say yes, but it is an exciting time in Scottish history and to even be able to sit there while it’s happening is a great honor, and I am excited to go back.”