Two renowned Mississippi writers already associated with the University of Mississippi Department of English had a room there dedicated in their honor Thursday (April 11).

The late Barry Hannah and Richard Ford were celebrated during the afternoon ceremony in what is now the Hannah-Ford Room for Writers (formerly Bondurant Hall lounge). Ford and his wife, Kristina, were in attendance, along with Barry Hannah Jr., his wife and children. 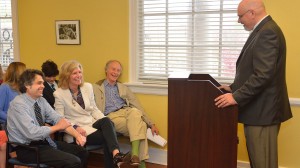 “The room is being named to honor two of Mississippi’s greatest writers,” said Ivo Kamps, chair and professor of English. “Both men taught in our English department, and we felt it was entirely appropriate to recognize their immense contribution to creative writing at the University of Mississippi.”

The renovation of the room was made possible by a generous donation from the Fords. Richard Ford taught a two-day master class in fiction writing to inaugurate the room.

“This is a really pleasing day for Kristina and me,” Ford said. “It only seemed fair to us that the MFA program’s student writers should have a room since the program sheds such a great light on the university.”

Ford said that although the couple donated funds for the renovation, it is fitting for his late colleague to receive top billing.

“I loved Barry and like to believe that he acknowledged my existence as a writer as well,” Ford said. “He established the MFA program almost singlehandedly and deserved recognition for his generous service to and support of it over the years.”

Between 9 a.m. and 2 p.m. weekdays, the room will serve as a casual meeting place for graduate students and faculty. Late afternoons, the space will house creative writing workshops. It also will be a venue for evening readings and receptions.

“Our graduate students are housed in Sommerville, a good distance away from the main English building,” Kamps said. “We hope that a welcoming place like the Hannah-Ford Room for Writers will bring them to the English department more often, increasing interactions with faculty members.”

While writing is for the most part a solitary act, the product of that act requires a community, Kamps said.

“The Hannah-Ford Room offers a space where that community can exist,” he said. “I know that our students are excited to have the room at their disposal.”

Barry “Po” Hannah Jr. expressed great appreciation for the recognition of his father in this manner.

“I know my father would have been incredibly honored by all this,” Hannah said. “He loved Ole Miss and gave so much of himself to the development of creative writers here. I think he’d be amazed and humbled by how much the MFA program has blossomed since its inception.”

Born in Meridian, Barry Hannah grew up in Clinton. He wrote eight novels and five short story collections. His first novel, “Geronimo Rex” (1972), won the William Faulkner Prize and was nominated for the National Book Award. “Airships,” his 1978 collection of short stories about the Vietnam War, the American Civil War and the modern South, won the Arnold Gingrich Short Fiction Award. The following year, Hannah received the prestigious Award in Literature from the American Academy and Institute of Arts and Letters. Hannah won a Guggenheim, the Robert Penn Warren Lifetime Achievement Award and the PEN/Malamud Award for excellence in the art of the short story.

He was awarded the Fiction Prize of the Mississippi Institute of Arts and Letters twice and received Mississippi’s prestigious Governor’s Award in 1989 for distinguished representation of the state of Mississippi in artistic and cultural matters. He was director of the MFA program at UM, where he taught creative writing for 28 years. He died in 2010 of a heart attack.

A Jackson native, Ford’s best-known works include “The Sportswriter,” which became the first novel to win both the PEN/Faulkner Award and the Pulitzer Prize for Fiction. Its sequels, “Independence Day” and “The Lay of the Land,” and the short story collection “Rock Springs,” are also wildly successful.

Winner of the Rea Award for the Short Story, Ford’s recent works include the story collections “Women with Men” (1997) and “A Multitude of Sins” (2002). He has been adjunct professor at the Oscar Wilde Centre with the School of English at Trinity College, Dublin, Ireland, and teaches on the master’s program in creative writing. Ford assumed the post of senior fiction professor at UM in 2011, replacing Hannah.

His latest novel, “Canada,” was published in 2012. Last fall, he became the Emmanuel Roman and Barrie Sardoff Professor of the humanities and professor of Writing at the Columbia University School of the Arts.

For more information about the Department of English, go to https://english.olemiss.edu/