After winning the NCAA singles tennis championship, the UM graduate is going pro 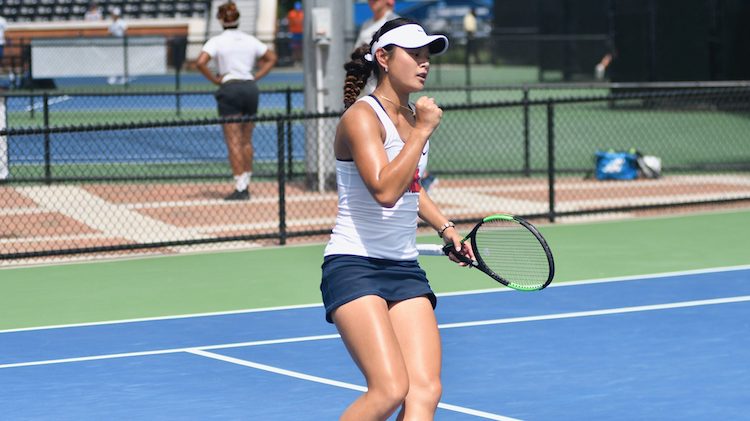 University of Mississippi student-athlete Arianne Hartono has faced such challenges as recuperating from a broken wrist her freshman year and missing as many as three out of five days of classes during the weeks when she had to travel to away matches.

She is the first women’s tennis player in the Ole Miss program to win the NCAA singles championship (Devin Britton won it in men’s tennis in 2009) and is also the first student-athlete in any sport at Ole Miss to be named a Honda Sports Award winner and the second player in program history to be named to the 2018 ITA Collegiate All-Star Team.

Hartono is philosophical about her success and quite willing to share the glory.

“I think it’s the process of it all,” said Hartono, a native of Meppel, Netherlands. “Obviously, you can’t become a national champion from one day to the other. There’s so much work that went into it.

“I believe that everything happened for a reason, even that injury I had my freshman year. That was part of the road I had to go on to, to be where I am right now. So I think all the work, all the effort, not just from me but everyone else that’s worked with me, worked with the team, has led up to this.”

Everyone else includes professors, administrators, coaches, family, teammates, and tutors and counselors/advisers at the FedEx Student-Athlete Academic Success Center.

“We have a wide range of services available to student-athletes for continued success,” said Derek Cowherd, senior associate athletics director for student-athlete development.

Hartono is a special student-athlete and a credit to Ole Miss, Cowherd said.

“Zvonimir Babic (a player on the men’s tennis team) tweeted that she is an inspiration to all student-athletes across the nation. And she should be,” Cowherd said. “Her demeanor, friendship to her teammates, her grace in which she carries herself, humble but confident nature, her wonderful spirit are all testaments to how her parents raised her … and she can play tennis, too.”

Hartono’s drive to excel comes partly from a sense of responsibility.

“Every year, we come together as a team, and we sit down and set up goals for ourselves,” she said. “… I’m just grateful for everything that’s been given to me, and I want to make the most of it. I think especially this year, knowing it was the last opportunity to represent Ole Miss for one more season, I’m not playing for myself but for this greater entity, so to speak. It just gives you more motivation to push harder.

“Our coaches and advisers, they all tell us that we student-athletes, we’re all leaders, so we have to act like them. We are held accountable for everything that we do. Keeping that in mind, we try to show the best of ourselves.”

As for her classes, Hartono took a no-nonsense approach.

Hartono said time management was the greatest challenge in tackling her classes, because she had to miss so many classes due to her tennis schedule that included not only matches but also two hours of practice and one hour of fitness or strength and conditioning each day.

“I’d be falling behind, especially in the spring when we were in season; we’d be traveling so much,” Hartono said. “I’d meet up with Dr. Reysen all the time. He was always willing to help me out. … I liked Dr. Kate’s class (Applied Behavior Analysis) because it was so interactive. … Definitely, one of my other favorite teachers is Dr. G.”

And the feeling is mutual.

“Arianne was one of those students that only come along every five to 10 years in a professor’s career,” said Gustafson, who taught Hartono in two advanced psychology classes. “She clearly had prepared for her classes and asked questions based on her readings that would be more expected in an advanced graduate seminar than an undergraduate lecture hall.

“On a personal level, Arianne is one of those students that made me, as a professor, feel like my job was rewarding. Rather than being a passive part of the crowd, her interest and competency and hard work made me look forward to the classes she was in, because I felt like I was making a difference.”

Reysen agreed that Hartono is bright, personable and a pleasure to have in his Cognitive Psychology class.

“Arianne was an outstanding student who was always able to maintain a high level of academic excellence despite the numerous obligations that came with being a student-athlete,” he said.

Hartono did a good job of using the skills she learned in class to make the atmosphere around her more fun, Kellum added.

“Her ability to take what she was learning in class out into the world was really good,” she said.

Classes, studying and tennis took up most of Hartono’s time, but she did manage to be on the Student-Athlete Advisory Committee, composed of two or three representatives from each team on the Ole Miss campus.

“Our job was basically to keep up with NCAA rules, with regulations, whatnot, but also about student-athlete development, any areas that we could improve. … Another thing we were concerned with was community service. That’s one of the things I really enjoy doing because I believe it’s so important to give back for everything that we’ve been given here.”

Because she completed a lot of her classes and requirements in her freshman and sophomore years, Hartono had time in her last semester to do something else she truly loves.

“I love to bake, and especially knowing that I have a team of seven hungry athletes, it’s easy to get rid of stuff,” Hartono said. “Before a trip, I’d hop on the bus and have brownies, or Oreo balls and all this other stuff. They appreciate it, and it just makes me happy, and it’s relaxing at the same time.” 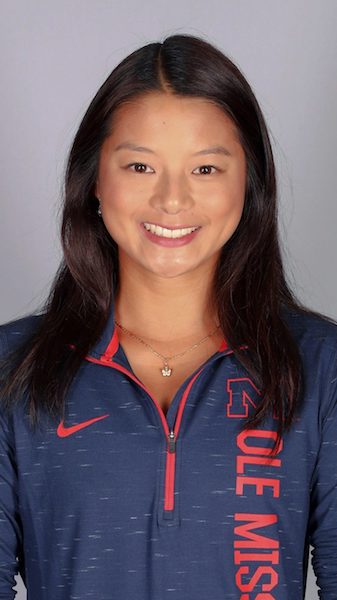 Path to the Win

Hartono remembers a pivotal conversation she had when she was about 6 years old. She and her mom had stopped to pick up her 9-year-old brother, Adriaan, who was finishing his tennis practice, and she helped pick up the tennis balls.

“So, what do you do? What are you into?” her brother’s coach asked her.

“Ballet? That’s nothing. Why don’t you try to play tennis?” the coach said.

And so she did, with support from her parents, Lieke and Okki Hartono, who had moved from Indonesia to the Netherlands in the 1990s. (Hartono speaks fluent Indonesian, Dutch and English, and took Chinese while at Ole Miss, reaching the conversational level. She also took French and German in high school.)

“(My parents) always told me, ‘As long as you love to play, we’ll support you in whatever you want to do,’” Hartono said. “With all the successes, they came to realize, ‘Oh, she’s actually good. She could be successful at it.’”

Hartono said her brother still enjoys tennis and is very supportive of her, though she has surpassed him in skill.

“I mean, he’s good, but he chose to focus more on his education instead, so he wasn’t practicing as intensely as I was. He would practice like twice a week, whereas I would practice four or five times a week. We were basically known as the Hartono tennis players around the region where we played. … I remember when I was younger, I tried so hard because I wanted to beat him so badly. But he’s a good sport, he can handle it,” she laughed.

Until college, Hartono trained at small clubs rather than tennis academies. She said she struggled to find sparring partners until she came to Ole Miss, where she suddenly had eight other women who were as good, if not better than her.

“I wouldn’t be where I am if it weren’t for them,” Hartono said. “When you spend so much time with a group like them, they become family.”

“He watched me play, and one of his former players – she was from the same hometown as I was, and so we kind of got in touch that way. That’s one of the main reasons I chose Ole Miss. I just loved the campus. I loved the team, just the entire atmosphere.”

Trying to win tennis matches in the NCAA, where all players are top-notch, is pressure-filled, but Hartono remembers a key moment that helped her de-stress.

“Grant Roberts, our assistant coach, was on my court most of the time whenever I was playing. … In times of trouble, so to speak, we’d sit down on the break, and he’d come and we’d talk about strategies or whatever, but for me it was important to keep things simple. I tend to overthink or make things overcomplicated for myself, and that’s not necessary.

“In the finals, (Grant) would ask me, ‘So, what is our one word this tournament?’

“Fun” is the word that popped up.

“Because at the end of the day, I’ll play my best tennis when I’m having fun, when I’m enjoying the challenge. And so I think that’s the most important thing that happened, not winning the national championship. Of course, that’s great. I’m not complaining,” she laughed. “But I think that was the result of me enjoying what I was doing.

“That’s a great achievement for myself. I was able to put winning and the result aside, for me to know I was doing what I love. In anything anyone does, I think that’s just so important because, otherwise, why are you doing it? And to know that I can succeed at that is mind-blowing, unbelievable and amazing.” 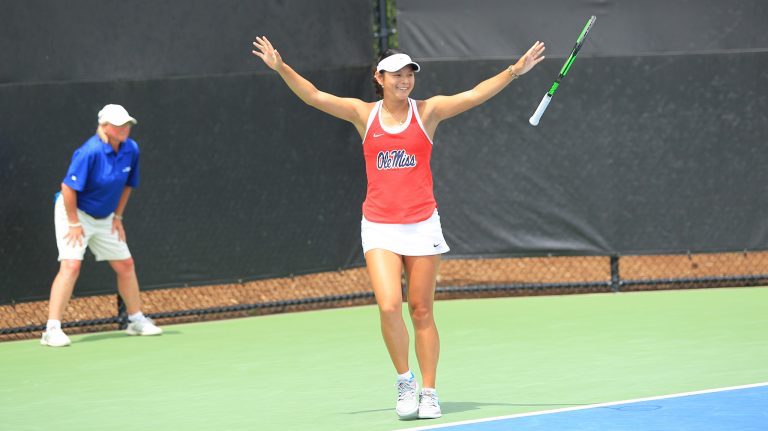 Arianne Hartono is the first Honda Sports Award winner in Ole Miss history. With a record of 37-6 this season, she finished the year winning 17 straight matches. Photo courtesy of Ole Miss Athletics

Hartono is going pro. After graduation, she went back to the Netherlands for a short while to spend time with her family and enjoy her mom’s cooking. She was scheduled to play her first professional match in Portugal and one in Indonesia, where she also planned to visit family.

She said as long as she loves to play, she’ll keep at it.

“If not, then I’ll find something else to do. That’s why I have a college degree,” she laughed.

She also plans to return to Ole Miss in the fall to visit with the tennis team and friends.

“I can never say goodbye to Ole Miss. We (she and her teammates) always tell each other, ‘Once a Rebel, always a Rebel.’ I truly believe that.”

Whatever successes and challenges lie ahead for Hartono, she can always look back at her college days and feel joy.