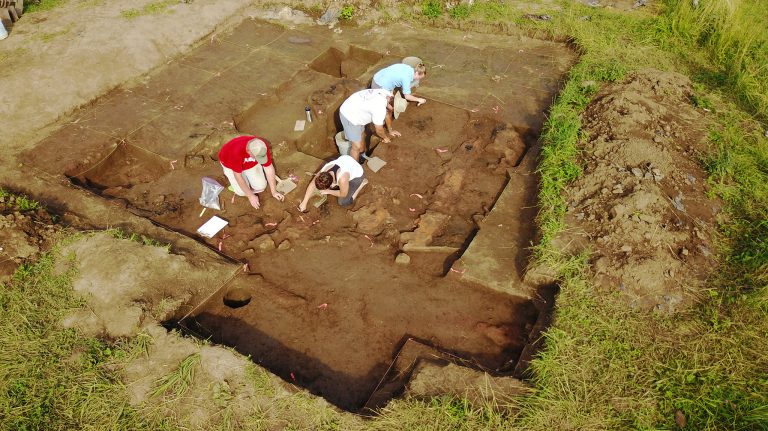 University of Mississippi students participated this summer in a four-week field school excavating the remains of a Native American house at the Carter Robinson Mound site in Ewing, Virginia.

The field school, led by Maureen Meyers, assistant professor of anthropology, returned to a house on the site that was partially excavated in 2007 and 2008.

“We knew from the past work that there were three houses built on top of one another in this location, which is unlike any of the other houses at the site,” Meyers said. “This year, we uncovered about half of the second house.

“To my surprise, we found burned walls and logs in really good preservation. We uncovered these walls, mapped and photographed them, and excavated posts from this house and the house above it.”

The site also will be featured in American Archaeology Magazine later this fall. Here’s a Sneak Peak: Covering the Mississippian Frontier at Carter Robinson from the publisher, the Archaeological Conservancy.

Archaeologists first identified the site, which is privately owned by the Robinson family, in 1962. Meyers began excavations there in 2006 and held field schools at the site five times over the last decade.

Meyers has identified and partially excavated remains of six houses at the site. To date, more than 90,000 artifacts have been recovered from excavation, including ceramics, lithics, animal bones, botanical remains, building material from burned walls and other smaller items, such as shell beads.

“Their sites generally consist of villages with an earthen mound, a plaza and a village of square houses surrounding the mound and plaza.”

The Mississippian cultural time period, from A.D. 900 to 1550, is located predominately in Mississippi, Louisiana, Alabama, Georgia, Tennessee, western North Carolina and southern Kentucky. The Carter Robinson site is one of two Mississippian mounds in southwest Virginia.

Work at the site has been funded by a UM College of Liberal Arts Summer Research Grant, a National Geographic Society Exploration and Research Grant, a Sigma Xi Grant-in-Aid, a Virginia Academy of Sciences Research grant and a University of Kentucky Dissertation Enhancement Award..

Meyers has published multiple book chapters and articles about the site, including the most recent issue of Southeastern Archaeology. She has trained more than 50 students at the sites over the years through field schools, and three UM students are working on master’s theses using data from the site.

Dalton Capps, a graduate student in anthropology from Columbus, is building his thesis based on lithic tool productions from the site.

“I am looking at how the different structures that have been excavated at Carter Robinson differ when it comes to lithic production,” Capps said.

He also participated in the field school as an undergraduate student in 2015.

“The most interesting finds for me were the large amount of shell and the few drills that we found. In 2015, we found some very interesting ceramics, including what may have been part of a human effigy.”

Capps also will analyze the finds from this site from previous excavations years in which Meyers has brought students to the field school.