Their project with Preserve Marshall County & Holly Springs, Mississippi Humanities Council, Visit Mississippi, and The Slave Dwelling Project is featured on an interactive NHC map and described as the following: 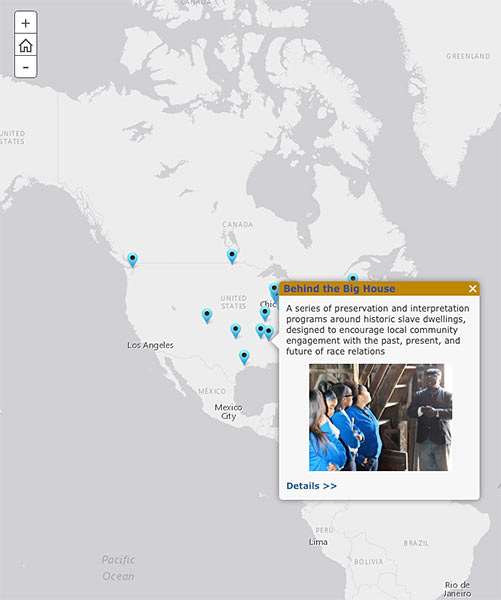 A series of preservation and interpretation programs around historic slave dwellings, designed to encourage local community engagement with the past, present, and future of race relations.

Each year, pilgrimage tours throughout the old South immerse visitors in re-creations of the antebellum era, focused largely on historic homes. In the city of Holly Springs, Mississippi historical preservation advocates have created the Behind the Big House program, collaborating with academic researchers to ensure that these re-creations of local history move beyond the city’s large mansions to explore its many extant slave dwellings and interpret the experiences of the enslaved people who inhabited them.

Faculty and students from the University of Mississippi Department of Sociology and Anthropology and Center for the Study of Southern Culture are central to this project, serving as docents as part of their coursework on southern heritage and tourism, and leading archaeological digs to reveal aspects of daily life in and around the slave dwellings.

Behind the Big House’s creator and primary organizer, Preserve Marshall County & Holly Springs, Inc., developed the program in order to underscore the linkage between historic preservation and a fuller understanding and appreciation of local history, and to draw attention to issues of slavery and race relations in discussions of the Holly Springs community’s past, present and future. Since Behind the Big House launched in 2011, organizers have noted a marked diversification of participants in the city’s annual Pilgrimage tours. Concurrently, Behind the Big House has given impetus to a new local program titled Gracing the Table, a local racial reconciliation group, co-founded by Rust College faculty and students, whose motto is “community healing through communication.”

Finally, Behind the Big House reaches growing numbers of students from local public schools each year, and the program’s organizers are developing an approach to year-round school programming and other study groups. This approach is intended to serve as a template for other communities with similar ties to the legacy of slavery that wish to revisit their own historical narratives in the interest of greater accuracy, completeness, and inclusiveness, whether or not they contain extant slave dwellings.