An Ethical Proposition for UM 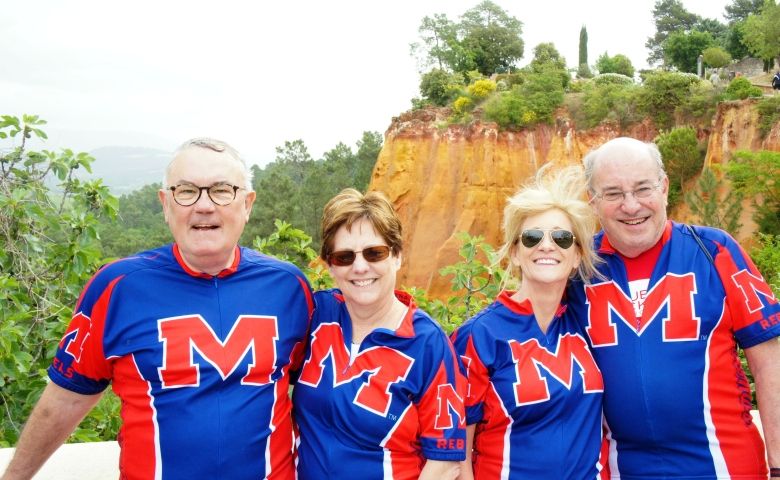 UM alumni Frances and Hume Bryant (right) and Bruce and Mary Betsy Bellande (left) of Oxford, Miss. enjoy a ten day cycling trip through the Provence region of France in 2014 while sporting their UM jerseys.

Hume Bryant and his wife, Frances, have established the Mr. and Mrs. Alfred Hume Bryant Lectureship in Ethics Endowment through a recent pledge and gift of real estate. The new endowment will offer faculty support to enable additional ethics courses across disciplines, allowing more UM students to ponder ethical queries through academic instruction and carry strengthened reasoning skills into their post-academic life.

“Ethics courses help students learn to think and decipher all the grey areas between what we call ‘right and wrong,’” said Bryant. “If you don’t learn how to think critically, you probably shouldn’t be in a position to make important decisions. For instance, it came out recently that corporate managers knew about an automobile malfunction that killed people but were afraid to say anything. How does that happen? I think people sometimes make decisions without considering the ethical consequences.” 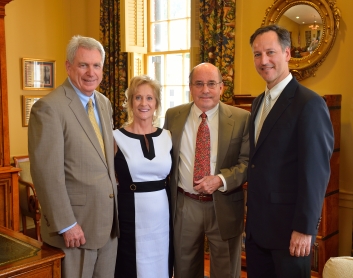 Chancellor Dan Jones (left) and Interim Dean of the College of Liberal Arts Richard Forgette (right) thank Frances and Hume Bryant for their gift creating an endowment to support the teaching of ethics at the University of Mississippi.

Bryant, a 1964 engineering graduate, enjoyed his years at UM from youth through graduation. The son of a university professor and administrator, his childhood home was where Lamar Hall now stands, and he attended University High School, housed in what is now the music building. As an undergraduate he participated in the band playing the flute and piccolo.

The band is still my favorite part of the game day experience,” he said.

He met his first wife, Barbara Kalif, at UM. After graduation, Bryant was assigned to the Strategic Air Command in New England where he ended his active duty tour as a captain. After earning a master’s degree in business administration from Harvard University, he embarked on a 25-year career with Southern Pacific railroad that moved the couple to San Francisco, where they raised two children, William and Michelle.

Barbara Bryant passed away while they were living in California. After moving to Chicago and Fort Worth, Hume Bryant retired to Oxford in 2000.

I loved the cities I lived in, but grew tired of the commotion,” he said. “I was very fortunate to come home to a place like Oxford.”

But as a young man, Bryant was eager to expand his horizons.

“We have a very complicated history,” Bryant said of the university and Oxford. “Growing up, there was often talk among my family about issues that were not necessarily popular, but were very important. I know now that these discussions were really about ethics.”

Bryant’s family played a major role in UM’s history. His mother, Willie Hume, was the niece of Alfred Hume, the first chancellor to possess an earned doctorate. Hume served UM for nearly 60 years as a professor and chair of the Department of Mathematics, dean of the College of Liberal Arts, two-term chancellor and three appointments as acting chancellor. He is credited for preventing Gov. Theodore Bilbo from moving the university to Jackson.

His father, W. Alton Bryant, was chair of the Department of English, provost and later vice chancellor. He is noted for encouraging fellow administrators during the tumultuous period of integration to “be concerned about how rules were implemented and the effects of carrying them out as much as their literal meaning.”

Bryant also noted another key influence, the Rev. Duncan Gray, Jr. While rector from 1957 to 1965 at St. Peter’s Episcopal Church in Oxford, Gray became a motivating figure during James Meredith’s admission. Gray was among a minority of outspoken Mississippians regarding the ethical dilemma of integration. During a Sunday morning sermon the day of the 1962 riot, Gray told his congregation, “No university in the world would defend this position rationally, and no Christian church would defend it morally.”

That evening, Gray moved throughout the angry mob, removing bricks from hands and encouraging people to go home before he was overtaken by a mob and beaten.

“I was in Carrier Hall as the riot started, then went to the Sigma Nu house,” Bryant remembered. “Some fraternity brothers and I tried to misdirect potential trouble makers coming to the campus. Thinking back over that time, I realize that while I still did not necessarily associate ‘ethics’ with the incident, I did know that Reverend Gray followed his beliefs at great risk to his person – and did what was right – regardless of the consequences. I was so impressed with his actions that the following spring, I went through confirmation classes with Reverend Gray and joined St. Peter’s.”

Today, Bryant serves Oxford by volunteering on the Oxford Tree Board. His tenure has helped acquire almost $200,000 in Mississippi Forestry Commission grants for the community. He enjoys gardening, nature, biking and lives near the downtown square in walking distance to his favorite places, including the UM campus and St. Peter’s Episcopal Church.

He is not alone on his walks and bike rides, however. Through mutual friends, Bryant met Frances Byars King and the two were married in 2013. Frances Bryant attended UM from 1976 to 1980 studying marketing. She has spent her career in sales and works for AirMedCare, the largest independent air medical network in the nation.

“We are two polar opposites,” said Frances Bryant. “I’m very spontaneous, while Hume is the consummate planner. But that works very well for us. I was so proud when he wanted to establish this lectureship. It’s a good fit, and captures an essence of him that I care for deeply.”

Steven Skultety, chair and associate professor of the Department of Philosophy and Religion, was pleased to hear UM alumni established the lectureship to highlight the importance of ethics in a liberal arts education.

“Many people believe ethics can teach us nothing because they assume values are subjective, unscientific and up to each person,” said Skultety. “It is incredibly important that our university helps students understand that constructing a persuasive ethical argument demands as much logical reasoning and unbiased attention as conducting a scientific experiment or creating a mathematical proof. After all, when they enter the work world, our graduates will inevitably face decisions and dilemmas that will call upon their critical skills and familiarity with ethical principles.”

UM offers environmental, biomedical, and general survey ethics courses to undergraduates and legal ethics within the School of Law. However, as yearly offerings average only one section per year, availability is limited.

Skultety believes the Bryant Endowment will help address that need.

“With guidance from the College of Liberal Arts and the Office of the Provost, we plan on using this gift to create a position for a full-time ethicist,” said Skultety. “Not only will this position lead to more classes being offered but also will promote greater coordination among faculty teaching ethics in some capacity. A full-time ethicist will increase visibility for ethics on our campus, and he or she will serve as the point-person for anyone studying ethics in a scholarly way. The prospect is very exciting.”

On a larger scale, this gift represents foundational beliefs about the importance of a liberal arts education that were shared by Hume Bryant’s predecessors.

“On behalf of our university community, we thank Hume and Frances Bryant for their generous support,” said Morris Stocks, provost and vice chancellor for academic affairs. “This gift will strengthen our liberal arts faculty and help provide meaningful opportunities for our students to develop critical thinking skills and find moral purpose as they endeavor in their academic and career pursuits. The Bryant family has a long legacy of leadership at the University of Mississippi, and we are truly grateful for their commitment.”

Individuals and organizations can make gifts to the Mr. and Mrs. Alfred Hume Bryant Lectureship in Ethics Endowment by mailing a check with the fund noted in the memo line to the University of Mississippi Foundation, 406 University Avenue, Oxford, Miss., 38655; visiting http://www.umfoundation.com/makeagift; or contacting Denson Hollis, senior development officer for the College of Liberal Arts, at 662-915-5092 or dhollis@olemiss.edu.