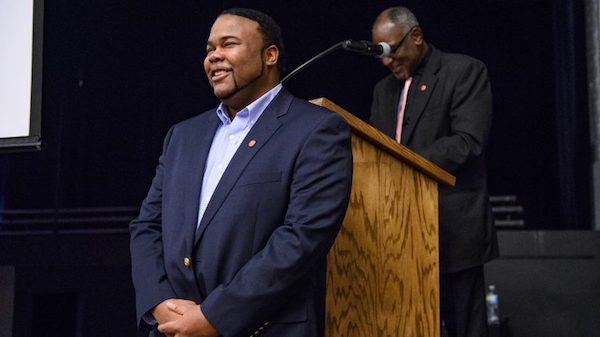 When he was a freshman at the University of Mississippi in 2002, Ryan Upshaw saw a flyer about the Black Student Union and decided to join with some other classmates. Little did he know, this decision would greatly shape his life.

Upshaw, a Moss Point native who earned his undergraduate degree in psychology in 2006 and a master’s higher education in 2008, is assistant dean of student services for the UM School of Engineering. He was named the BSU’s Outstanding Faculty/Staff Award winner in 2015 and has remained an involved BSU alumnus.

He said he found a strong network within BSU during his undergraduate years, made lifelong friendships and developed his leadership skills. He also became more service-minded.

“Having a student organization that the university looked to regarding the issues black students faced was key for me and many other students and likely why we got involved,” Upshaw said. “There was just a support system within BSU that one couldn’t really find anywhere else.

“Being in BSU, I felt empowered to become a part of other organizations, like the Associated Student Body, Ole Miss Ambassadors and orientation leaders.”

The university’s BSU, founded in 1968, celebrates its 50th anniversary with events throughout the 2017-18 academic year. The group’s golden birthday will culminate with a gala in February.

Throughout the period of celebration, past presidents, former members and current students will be profiled on the BSU website and on the UM website. Special anniversary content on social media can also be found using the hashtag #UMBSU50.

While Upshaw was a student, LaToya Coleman, Brianna O’Neal and Brian Haynes were all BSU presidents whom he admired for being strong advocates for minority students. Their dedication made them role models to Upshaw and many other students.

Haynes, who was BSU president during the 2002-03 academic year, remembers the freshman Upshaw as being committed to the group’s mission, but also very personable.

“Ryan’s outgoing personality and desire to promote diversity and inclusion across the Ole Miss campus was very beneficial in assisting the Black Student Union fulfill its mission – a mission that is attentive to a sense of community and inclusion among all students at the university,” Haynes said. “The Black Student Union nurtured Ryan’s growth sociably and assisted in the development of skills that crafted his path toward his collegiate and career goals.”

The BSU’s “Turn Your Back on Hate” campaign during Upshaw’s undergraduate years inspired him. At the time, it was a new approach to confronting controversial speakers on campus. Students lined up in large numbers to protest, but instead of yelling or holding signs, they peacefully turned their backs to the speaker.

“It was sort of my first introduction to activism on a college campus,” Upshaw said. “It also helped to show me that I could have a voice. I am certain that it has definitely been an influence given the climate of our campus today.”

Upshaw credits administrators Val Ross, Donald Cole and Thomas Wallace as being great advocates for students of color during his time as a student. BSU also played a major role in serving those students.

He credits BSU for driving recent moves such as the university’s creation the Center for Inclusion and Cross Cultural Engagement and its hiring of Katrina Caldwell as the first-ever vice chancellor for diversity and community engagement.

Looking back on his time with the BSU, Upshaw is proud of the group’s longstanding legacy of service.

“We weren’t just thinking of ourselves,” he said. “We wanted to give back to the campus and the larger community.”