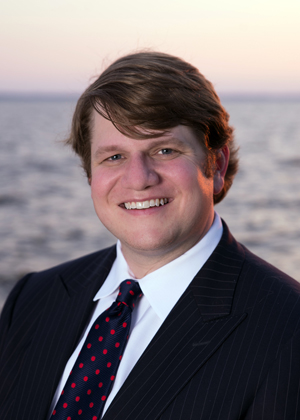 A career in financial strategies typically doesn’t begin with an English major spending his summers studying abroad in Costa Rica. But for alumnus Taylor Sledge (BA English ’07), president of the financial strategies firm Sledge and Company, that’s exactly where it all began.

“I studied English in college and had no background in finance,” Sledge said. “But what I learned after a while is that business is more about people and communicating with people efficiently and understanding them. Having a degree in English has been so incredibly powerful to my career path, because it taught me how to be a better communicator and learn more. That’s what a liberal arts education does in my opinion—it kind of puts you on a track of learning how to continue to intake ideas and learn and grow.”

A native of Jackson, Sledge graduated from Jackson Preparatory School in 2003 unsure of where he would go to further his education.

A member of Kappa Alpha Order, Sledge began his freshman year as a theatre major before switching to English the following year.

“That was one of the best decisions I ever made,” he said. “It was awesome getting a liberal arts education at Ole Miss, especially in the English department. A lot of good things happened to me in that program.”

Chief among those good things was the university’s study abroad program. He chose Spanish as his minor and knew the program would provide the perfect opportunity to not only hone his foreign language skills but also learn more about interacting with different types of people.

“It added so much more to the learning experience,” Sledge said. “It not only taught me how to be better with the Spanish language but really more about the people of those other cultures and what life is like for them. I made some awesome friends through that program that I still have to this day.”

While Sledge spent his summers studying abroad learning about the cultures of Costa Rica, Chile, Argentina and Spain, it was the professors who helped him along the way that were most impactful.

“The study abroad program was led by Dr. John Gutiérrez [Croft professor of Spanish and international studies],” Sledge said.
“He made a big impact on me and was a great leader. I also loved spending time with Colby Kullman, [professor emeritus of English], and poet Beth Ann Fennelly, [associate professor of English.] They were all very committed to not only something they felt was their passion but was also their purpose.”

After receiving a bachelor’s degree in 2007, Sledge returned to Jackson and, at the urging of his grandfather, began working as a financial professional for a Fortune 100 financial firm.

“At first I really wasn’t so sure about being in finance, because I didn’t know anything about it and felt kind of lost,” he said. “But I realized after a while that the main thing I needed to do alongside learning more about money was to be considerate and thoughtful of peoples’ problems – to really listen and take in what they need. Then look at how can we use the tools that we have to help make their lives better. That’s where my degree has really helped me in my career because I learned how to be a good communicator.”

Sledge stayed with the firm for three years before opening his own financial strategies firm, Sledge and Company, in 2010.

What started with a staff of one now includes a team of six at the company’s headquarters in Madison and a network that has grown into a group with strategic planning resources and professionals throughout the U.S.

“I realized after a little while that the independence of entrepreneurship would really give me a platform to build something for the clientele that I love to serve,” Sledge said. “Being able to go out and do something independently was a big desire for me, so I could give people something that they needed the way that we wanted to do it for them.”

Sledge was featured in numerous media outlets highlighting his success including Entrepreneur Magazine, USA Today and Mississippi Business Journal. He is the recipient of several business awards including being named a “Top 4 Under 40” by NAIFA’s Advisor Today.

“My favorite thing is working with people who own a business and having the opportunity to solve problems for them,” Sledge said. “To watch them grow and be a part of that is truly rewarding. I love being a part of someone else’s future and trying to make that future brighter. As for my future, I’m going to make sure that I do my best to take on whatever God puts on my plate.”