December 13, 2017  By Bethany Fitts for the Ole Miss Alumni Association 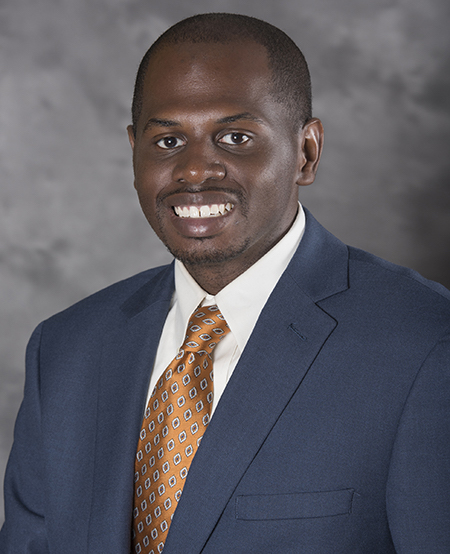 When Chris Presley (BA biology ’12) needs encouragement and inspiration to face life’s obstacles, he listens to songs like Andra Day’s “Rise Up” in which Day sings, “I’ll rise up. I’ll rise like the day. I’ll rise up. I’ll rise unafraid.” Presley’s recent placement on the St. Louis Business Journal’s “30 Under 30” list, which recognizes top people within any profession who are considered rising leaders within the community, is a testament that Presley took Day’s lyrics to heart.

“That was a big highlight—knowing that I’ve only been in St. Louis for about three and a half years [while] most of the people on that list were from St. Louis. That let me know that I had made contributions to St. Louis that people were starting to see,” Presley said.

After moving to St. Louis, he was moved by the tragedies within Ferguson and joined the Urban League Young Professionals (ULYP) to join the movement for social change. Moreover, Presley served the St. Louis area on community boards as vice president of finance for Urban League Young Professionals of Metropolitan and is past president of the St. Louis Ole Miss Alumni Club. Presley was also the youngest employee in the business school at St. Louis’s Washington University where he helped lead the undergraduate business program from a number four to a number one ranking.

Now in his second year as a Ph.D. student at Saint Louis University, he is well on his way to becoming a senior-level administrator in higher education with a goal of improving access, retention and success for students regardless of their background.

“This may sound weird, but a lot of what’s inspired me is the chaos that’s going on around America and knowing that I can make a positive impact not only on people that I’m around but also on future generations to kind of mold and shape them,” Presley said.

Presley’s success is no surprise, because he was a hard worker during his years at Ole Miss. He didn’t initially think he would attend the university due to its proximity to home, but he eventually came around due to the influence of Dr. Donald Cole (PhD ’85), an assistant provost and associate professor of mathematics, who encouraged him to pursue a degree in biology and who opened his eyes to the opportunities he had access to at the university.

Another selling point for Presley was the university’s marching band. He loved the Pride of the South and became a drum major during his junior year.

“I knew that I wanted to be in the marching band, “Presley said. “I auditioned and got a scholarship, and from the first day I fell in love with the Pride of the South. It was a great experience to lead the band and conduct the band at the football games and to be among 60,000 fans.”

Outside of the marching band Presley was a 2012 Campus Favorite, an Ole Miss Women’s Council scholar and an IMATE scholar. The IMATE program, which is an acronym for Increasing Minority Access to Graduate Education, serves underrepresented minorities who are interested in STEM fields.

“As a biology student I was part of [the IMATE] program,” Presley said. “It really helped me gain leadership skills but also exposed me to different areas to do research and to think about pursuing the next level of my education.”

The IMATE program’s dedication to promoting minority access impacted Presley beyond his years as an Ole Miss undergraduate. In fact, his commitment to diversity and inclusion led him to be chosen as one of only five employees at Washington University to participate in the 2015 Global Diversity Overseas Seminar, a nine-month professional development opportunity.

Since Presley’s trip to Seoul, South Korea, he has been a strong advocate for international and minority students, leading to his recognition as Advisor of the Year and a teaching role for an Identity Literacy course. Moreover, he recently launched the Olin Fleischer Scholars Program, a summer program for underrepresented students in high school to gain exposure to business majors and professions.

“I’m always very fulfilled when I’m talking to someone who never knew that one of the programs I established was an option for them,” Presley said. “And then once they go through the programs, being able to see how their attitude has changed when they continue to keep in contact with me and ask even more questions and when I see them reaching the goals they set for themselves–it’s very rewarding.”

Presley’s mission is to eliminate any obstacles people might face in pursuing their education and to help create a reality for people who may have never envisioned the opportunities available to them.

“I want to let people know that regardless of their background, whether it be socioeconomic status or race or religion or sexual orientation, they can achieve whatever goals they set for themselves,” Presley said.

Presley currently leads the operations team and manages the enrollment aspects for prospective MBA students at the Consortium for Graduate Study in Management, an alliance of 19 top-tier MBA programs across the country. The Consortium’s mission is to enhance diversity and inclusion in global business education and leadership. In the future, he would like the option to teach and be a senior level administrator and, “maybe return to Mississippi.”