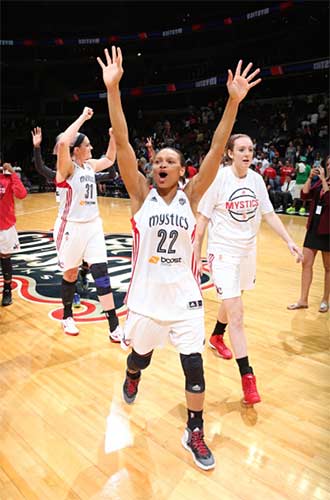 Most fans remember her as a scrappy player from Myrtle, Mississippi who led the Rebels to the 2007 NCAA Elite Eight and was the No. 3 overall pick in the 2007 WNBA Draft. Not too much has changed, she’s still a scrappy ball player, but she’s added radio analyst and SEC Network Plus color commentator to her repertoire.

Herrington is in her ninth season in the WNBA after being drafted by the Chicago Sky in 2007. The No. 3 overall pick, Herrington went on to earn WNBA Rookie of the Year honors and has twice been selected to the WNBA All-Defensive team. After spending the 2014 season in Los Angeles with her former head coach at Ole Miss, Carol Ross, Herrington will spend the 2015 season as a member of the Washington Mystics.

Herrington was also honored at Ole Miss’ 2015 SEC Legend and was recognized at the SEC Tournament in Little Rock, Arkansas. Herrington, who was inducted into the M-Club Hall of Fame in 2014, still ranks. No. 3 all-time at Ole Miss with 2,165 career points.

Herrington and her Mystics squad opened the 2015 WNBA season on June 5 when they traveled to Connecticut to take on the Sun, where former Ole Miss great Jennifer Gillom serves as an assistant coach.