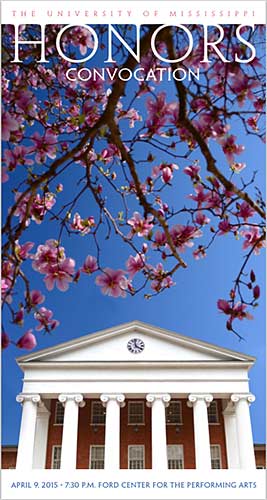 “The University of Mississippi provides for a range of opportunities for all our students, and the ones being honored today have taken full advantage of the university’s resources. Going forward, our charge to you is to take these experiences and use them to help shape a better state, nation and world.”—CHANCELLOR DANIEL W. JONES

Outstanding students from all academic disciplines and the campuswide top teacher were recognized Thursday, April 9 at the University of Mississippi 72nd annual Honors Day Convocation at the Gertrude C. Ford Center for the Performing Arts.

Guest speaker for the event was the 2014 Hood Award recipient, Ann Fisher-Wirth, professor of English, director of the Environmental Studies minor.

The Taylor Medals, established in 1904, are the university’s highest academic award and recognize no more than 1 percent of the student body each year. The Hood Award was first given in 1966 and allows faculty, staff, students and alumni to nominate a deserving professor for superior classroom teaching.

Around 170 students were inducted into Phi Kappa Phi, the university’s highest academic honor across all disciplines. The speaker was David Rock, dean of the School of Education and professor of curriculum and instruction.

Sixty-eight students were inducted into Phi Beta Kappa, the university’s highest academic honor in the liberal arts. Ted Ownby, director of the Center for the Study of Southern Culture and professor of history, spoke at the ceremony.

Awards in the College of Liberal Arts

Howerton-Fortenberry Award in the Study of Government

Senator’s Award for Excellence in the Study of Politics

Governor’s Award for Excellence in the Study of Politics

Awards in the Graduate School