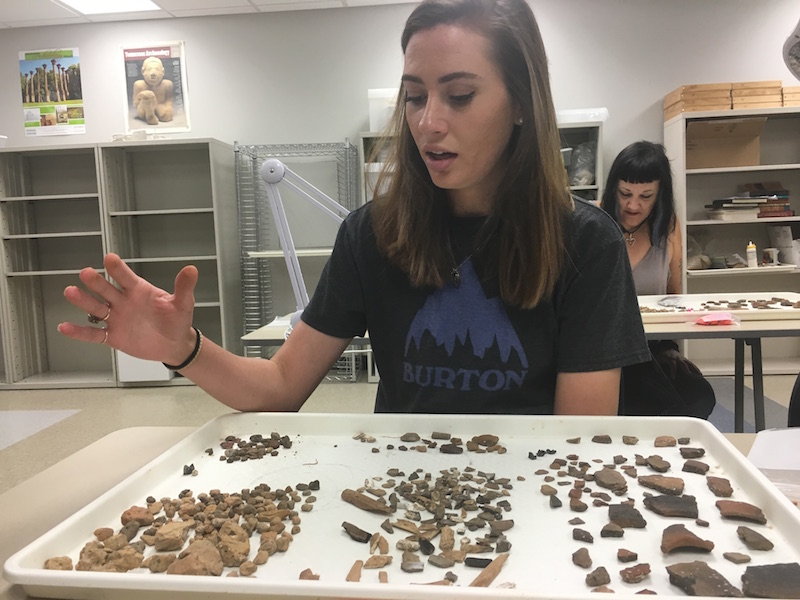 University of Mississippi graduate student Emily Clark dreamed of becoming an archaeologist since she was 5 years old.

“I was the kid that took my toys and buried them in the sandbox and pretended I was making a discovery,” Clark said.

Her dream is becoming a reality at UM, and she’s no longer pretending. In June, Clark and fellow graduate student Allie Smith served as field supervisors of the summer session Study USA course in the Department of Anthropology and Sociology, an archaeological field session at a Native American site in Oktibbeha County.

With the help of UM undergraduate students, researchers from the University of Florida and representatives from Chickasaw Nation in Oklahoma, the group discovered tens of thousands of artifacts during the four-week course.

“I was not disappointed with the findings from this site,” said Tony Boudreaux, associate professor of anthropology and director of the Center for Archaeological Research. “There were a ton of artifacts found, and it’s enough to not only keep us busy, but learn about the people and societies that produced them.”

Boudreaux said items found from the site, believed to date to the early contact period of Native Americans and Europeans between 1400 and 1700, include pottery, animal bone, stone and clay.

“This is a time we don’t have a lot of written documentation of,” he said. “Native Americans in the Southeast went through a time of significant change, and through archaeology, we can tell the story of these people.”

By looking at this site, Boudreaux said he is hoping to discover the processes by which Native Americans, likely Chickasaw or their ancestors, were affected by contact with Europeans.

This dig served as a course to assist students and faculty with their research interests in addition to training undergraduates.

“This gave our students an opportunity to work with other archaeologists and see the practices and research interests while making connections in the profession,” Boudreaux said. “Working with the Chickasaw Nation allowed us to tell stories we otherwise can’t tell.

“This group has a genuine interest in these objects, and knowing that, you can see the importance of archaeology.”

Next up for the artifacts is the analysis. Clark, an Oklahoma City native who received her bachelor’s degree from the University of Oklahoma, will focus her research on the political and social cultures of Native Americans in Oktibbeha, Clay and Lowndes counties during this time of early contact.

The lengthy process of washing, sorting, counting, bagging and identifying each item within a database becomes thrilling when patterns are found, Clark said.

“You have a puzzle but you don’t have all the pieces,” she said. “So when you get two to fit together, it’s exciting.”

Smith will study the ceramics discovered from this site and their attributes for her graduate research, hoping to find patterns that will help her build a chronology of the society.

The native of Fort Payne, Alabama, earned her bachelor’s degree in anthropology from Auburn University. Growing up in the Southeast gave Smith an interest in her area and its evolution into modern society. This project allows her to further explore that interest.

“To me, archaeology gives me an opportunity to understand my landscape and the history underneath it,” she said. “One thing I’ve learned from archaeology is that one hour in the field is equal to six or seven in the lab, and lab work is just as important in understanding what’s happening.”

Clark and Smith both hope to have the analysis completed sometime this fall. The collection of artifacts will then be available to researchers from around the world to study Native American life in Mississippi.

The field school is offered each summer, along with a variety of other courses from Study USA. Next year, students will travel with anthropology professor Maureen Meyers to Native American sites in Virginia.

“The university’s Study USA program helps to facilitate courses such as ANTH 335 by assisting faculty members in introducing students to research, industry and professionals with firsthand experience,” said Kristina Phillips, coordinator of continuing education programs. “Students earn credit while applying academic knowledge in practical fashion, all while visiting cities across the U.S.”

Course offerings are both academically and geographically diverse. Upcoming Wintersession courses include STEM in Hawaii, studio art in Miami and an Honors College course in biomedical ethics in Washington, D.C.

For information about the Department of Sociology and Anthropology, visit https://socanth.olemiss.edu/.