Winkle to Give ‘Last Lecture’ Before Retirement 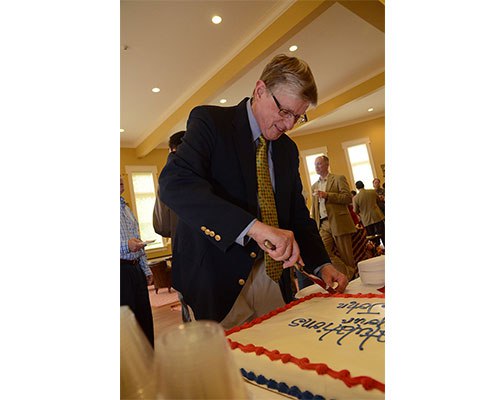 John Winkle III, professor of political science, will deliver the Mortar Board’s inaugural “Last Lecture” at 4 p.m. Friday. The event has a special meaning for the professor: It will be the last lecture he gives before retirement.

When he began teaching in August 1974, little more than a decade had passed since James Meredith’s integration of Ole Miss. Yet he saw the university as a place of potential. Reflecting on his time here, he is glad to have seen this come to fruition.

In the nearly four decades that have passed since he first stepped on campus, he has impacted countless students both as a professor and as the faculty adviser to the mock trial team. He has also been an integral part of the Sally McDonnell Barksdale Honors College and the honors program before it, serving as an adviser to several theses and instructing in Honors 101 and 102, in addition to special seminars.

“John is the consummate citizen scholar, and he teaches them (honors students) to be a great academic and to engage the world about us,” said Douglass Sullivan-González, dean of the honors college.

In 1980, Winkle was honored with the Elsie M. Hood Outstanding Teacher award, which recognizes excellence both in and outside of the classroom.

“I love the classroom; the interaction with students energizes me,” Winkle said. “I believe that teaching is all about intellectual awakening, and what we as faculty do is to provide the spark.”

Regardless of his environment, Winkle said he sees every class he teaches as an opportunity to impact his pupils.

“It doesn’t matter if it’s a constitutional class with 70 students or an honors college seminar. I’m there to help students tap their own potential and see their own possibilities,” Winkle said. “I believe in students or I wouldn’t be doing what I do.”

Chancellor Dan Jones said he sees Winkle as a fixture of the Ole Miss academic culture.

“Dr. Winkle represents all that is special about The University of Mississippi,” Jones said. “He has invested his entire career here. A dedicated professor who loves students and gives a lifetime of service here in one place — that is part of the magic of our university.”

Winkle admitted that when he first started teaching, he would not have guessed that he would have remained so long. In fact, he accepted the opportunity to serve as a visiting professor twice, once at Emory in 1990 and 1991, and once at West Point in 1999. He speaks fondly of his time at both and considers it a great experience.

He credits his work and outside life environments as well as the difference that he could make in his students’ lives for leading him to call Taylor, Miss., home.

Benjamin McMurtray, a third-year UM law student, is one of those students. He has taken four classes with Winkle and worked with him on the mock trial team. As it turns out, he already had a connection with the professor. Winkle had instructed McMurtray’s mother during her time at Ole Miss. Eight years after their first meeting, he credits Winkle with his decision to apply for law school. McMurtray originally planned to go into teaching but said Winkle’s encouragement made him reconsider law.

“I had very poor grades in undergraduate, but he (Winkle) didn’t let that cloud his view of me. I think he had faith that I would be a better student in law school,” McMurtray said. “For the last three years, I’ve really been trying to make him not regret that faith.”

It seems he did not. On Saturday, McMurtray will graduate in the top of his law class.

Although the reputation of his constitutional law classes precedes him, so does his caring nature for students, which has led many to rise to the intellectual challenge. McMurtray recalled a friend who was considering taking Winkle’s class. He knew he would most likely lose his 4.0 GPA if he took the class, but chose to enroll anyway. According to McMurtray, it was worth it.

When his colleagues speak about what makes him a great professor, one sentiment is repeated — his love for instructing students. So great is his passion, it would seem that he has taken a vow of teaching “in sickness and in health.”

He grins when recalling one of his favorite memories in the classroom. Stricken with laryngitis, he decided not to cancel class but rather to give a silent lecture on warrantless searches. He pantomimed police officers inspecting vehicles and motioned for students to participate as well.

Although future students will not have the opportunity to take his classes, they will be influenced by his actions in ways of which they may not even be aware. When the Ole Miss Class of 2017 stands to recite the creed at orientation, they will read words made possible through his position as the co-chair of the Ole Miss Creed committee. Further, the student who finds his or her voice through mock trial owes the opportunity to a man who has given countless hours of dedication to keeping the program alive.

Despite once thinking of law and his vast knowledge of the subject, Winkle is glad about his chosen path of teaching.

“Many of my friends in D.C. say you should have been a lawyer, and I say ‘No, I’ve found what I love, and it’s teaching.’ I think I could have done well in law, but I don’t know if my heart would have been there,” Winkle said.

From the DM by BRACEY HARRIS braceyh@gmail.com