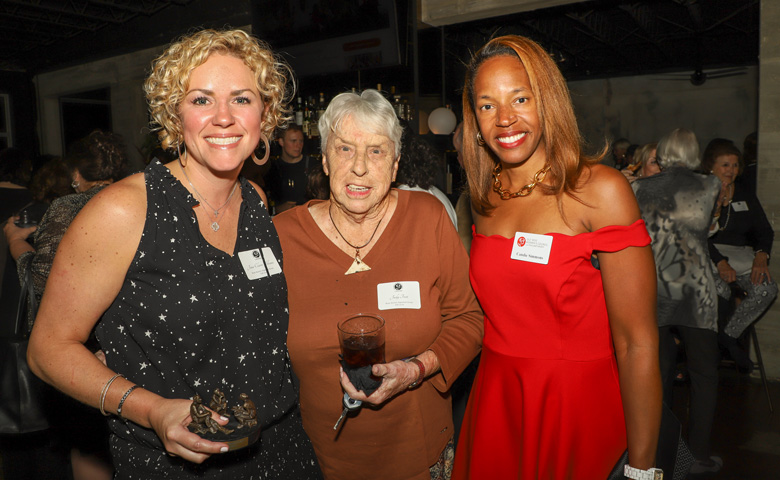 The Ole Miss Women’s Council for Philanthropy has named Dr. Jane-Claire Williams (far left) as the 2019 Emerging Young Philanthropist. On hand to congratulate her were Judy Trott (center), former dean of students at the University of Mississippi, and Candie Simmons, an OMWC member.

One Christmas Eve afternoon when Dr. Jane-Claire Williams was 9 years old, her family piled into their car and drove from their home in Jackson to a neighborhood in another part of town where homes were smaller and the lawns weren’t as manicured. 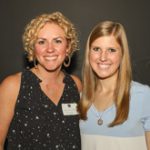 They stopped at one of those homes and delivered a Christmas dinner and toys to a family that couldn’t afford to celebrate Christmas the way Williams and most of her family and friends could.

The drive that day may have been short in distance, but the experience of showing kindness to others has stayed with Williams for a long time and represents one of several charitable acts that her parents involved their children in when they were growing up. Taken together, these episodes of goodwill started Williams on a journey of caring that continues today.

For her extensive service to others, Williams was honored Oct. 3 with the Emerging Philanthropist Award of the Ole Miss Women’s Council for Philanthropy at the University of Mississippi. She received the award at an event in Oxford.

“That Christmas Eve visit was just one of many similar examples throughout my childhood,” Williams recalled. “It was my parents’ philanthropic nature that fostered my desire to help others.”

And helping others is just what Williams does daily. In her professional career as a gastroenterologist with GI Associates and Endoscopy Center in Flowood, she cares for her patients’ health.

In her private life, she’s involved with several nonprofits that support members of her community, such as the Jackson Free Clinic, the Junior League of Jackson, Healing Hands Ministry, the Diabetes Foundation of Mississippi, Habitat for Humanity, The Grace House, American Heart Association and Northminster Baptist Church.

The Emerging Philanthropist Award was created to illustrate to OMWC scholars and others examples of philanthropic efforts accomplished by a person early in his or her life or career. It complements the OMWC’s Legacy Award, which honors individuals with lifetime resumes of philanthropy and accomplishments.

Williams, 40, is the second recipient of the award. Markeeva Morgan, a 2001 UM electrical engineering graduate and software manager for The Boeing Co., was the inaugural recipient.

“Jane-Claire exemplifies the true spirit of giving,” said Mary Susan Gallien Clinton, chair of the OMWC. “With her philanthropic dollars, time and skills, she promotes the well-being of others, promoting the betterment of Mississippi.”

Williams said she is grateful to receive the Emerging Philanthropist Award for 2019.

“There are so many people in my state, my community and my profession who incorporate the practice of being philanthropic into their everyday lives,” she said. “To be recognized as one of those people is an amazing honor.

“I truly believe that every challenge and triumph in my life has led me to where I am today. I’m so blessed to be in the position that I am to give back to my community. It’s my way of being part of something that is bigger than myself.”

She graduated from UM with a Bachelor of Arts in biology in 2001 and she earned her Doctor of Medicine from the UM School of Medicine in 2005.

Although she grew up cheering for Ole Miss, initially she wasn’t sure which universities she would apply to for admission. Her pursuit of a career in medicine came even later.

“When I was trying to decide where to attend college, I looked all over the Southeast, but in the end, I decided that Ole Miss was the best fit for me,” she said. “I loved the pre-med program and the overall atmosphere of the university.

“I wasn’t a person who knew my whole life that I wanted to be a doctor, but I did love being a caregiver. My interest in medicine began in high school when I realized I also really loved science.

“When I was in college, I worked as a physical therapy tech at Baptist Memorial Hospital in Oxford. I enjoyed taking care of patients in some of their most vulnerable times, and it was then that I realized that medicine was what I wanted to spend my life practicing.”

She completed her internship and residency in internal medicine at University of Mississippi Medical Center and was chief resident and assistant professor in the Department of Internal Medicine there. She completed her fellowship in gastroenterology at Baylor University Medical Center in Dallas, and she went on to complete additional training in endoscopic ultrasound at Montreal University Hospital Center in Montreal, Canada. She is board-certified in internal medicine and gastroenterology.

Williams has worked with several hospitals in the Jackson metro area and is affiliated with organizations that include the American Gastroenterological Association, American Society of Gastrointestinal Endoscopy and the American College of Physicians. She joined the staff of GI Associates in 2012.

She is devoted to the practice of internal medicine and noted that the problem-solving nature of it intrigues her.

“As a gastroenterologist, I perform procedures almost daily, but I also have to use my cognitive skills to problem solve at the same time,” Williams said. “I love that I have the opportunity to use the information that I can gain from doing a procedure as well as from my medical history to come to a solution to a problem.”

She lives in her hometown of Jackson with her husband, Nason Williams, an Oxford native. They met as students at Ole Miss and were married after she completed her first year of medical school. They have two daughters, Alex, 12, and Elise, 9; and a son, Parker, 5.

This summer, Williams combined her passions for medicine and helping others when she served as a career mentor to Madison Thornton, an Ole Miss junior and OMWC scholar from Hattiesburg.

Thornton, a biology and public policy leadership major, hopes to have a career in medicine. As part of her participation in the Sally McDonnell Barksdale Honors College‘s Clinical Shadowing Program at UMMC this past summer, she had opportunities to spend a lot of time with Williams.

“My wonderful mentor, Dr. Jane-Claire Williams, allowed me to stay with her for a month,” Thornton said. “She made me feel like part of her family, and she has supported me and encouraged me in my academic journey by offering me advice and resources.

“I am truly grateful for Jane-Claire and the Ole Miss Women’s Council for enriching my experiences and allowing me to become my best self.”

Williams said she and her family loved having Thornton stay with them for a few weeks.

“Madison is such an independent, intelligent and motivated young woman,” Williams said. “I am excited to be able to share my experiences and pearls of knowledge with her as she navigates her way through the pre-med curriculum and the application process for med school.

“The time commitment is a small price to pay to be able to get to know such a great young woman and to be involved in the process of her, hopefully, becoming a successful physician one day.”

Williams encourages everyone who is able to help those in need of assistance. Those who can’t afford to provide financial assistance to a nonprofit still can make an enormous difference in the lives of others by donating their time and talents.

“It is so important to get involved with and support nonprofit organizations because they provide services for people who oftentimes either can’t afford or simply don’t have access to the basic things that so many of us take for granted, such as food, shelter, health care and medications,” she said. “Every little bit of effort one is able to make to help others counts toward a greater goal.”

In its 19th year, the OMWC has attracted more than $15.7 million for scholarships. The $40,000 named scholarships – $10,000 annually for four years – are among the largest on campus. Thus far, 149 students have benefited from the program, which features mentoring, leadership development and cultural activities.

For more information on creating an OMWC scholarship or other avenues of supporting the program, contact Suzanne Helveston, development associate, at 662-915-2956 or shelveston@olemiss.edu. Information on the Women’s Council can also be found at http://www.omwc.olemiss.edu.