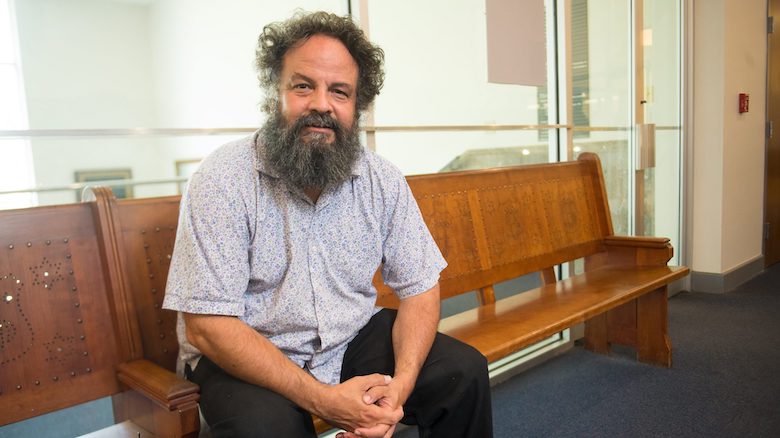 Field hollers, traditional African American church music and songs by a tractor driver who later became one of the most influential musicians of the 20th century are among the gems in the Coahoma Study of the Mississippi Delta in 1941-42.

The study by folklorist Alan Lomax and a team from Fisk University in Nashville is the focus of “Coahoma,” a new podcast series by Scott Barretta, a University of Mississippi adjunct instructor of sociology.

Barretta takes a deeper look into the nearly 600 field recordings that introduced blues legend McKinley Morganfield, aka Muddy Waters, to the world, but also painted a vibrant picture of African American life in Clarksdale and Coahoma County in the 1940s.

“Today, the Coahoma Study is best known for the recordings of Muddy Waters,” Barretta said. “But, its scope went beyond music to address issues such as religious practices, the transformative influence of pop culture, foodways, transportation, race relations, urbanization and economic conditions.

“In other words, it aimed to gain a full picture of the Delta’s African American community.”

“Coahoma” was funded by the Artworks program of the National Endowment for the Arts, and is the result of collaboration between the Delta Center for Culture and Learning at Delta State University and the New York-based Association for Cultural Equity, which maintains the Alan Lomax Archive.

By the time Lomax, of the Library of Congress, arrived in the Mississippi Delta with researchers from Fisk University in 1941, he was already a seasoned folklorist. Lomax had discovered and recorded inmate Huddie Ledbetter, better known as Lead Belly, on a visit to Angola prison in Louisiana in 1933, among others.

The Coahoma recordings were before Waters’ first commercial records, which came in 1946, and they give a sample of his acoustic sound, in contrast to the electrified music he made in Chicago. Waters was a tractor driver on the Stovall Plantation when he played for Lomax.

He later became father of Chicago Blues and influenced countless blues and rock musicians, including the Rolling Stones, who took their name from one of his lyrics and also imitated his guitar playing.

In the recordings, Waters plays solo on some tracks but is accompanied by a string band with a fiddle and mandolin player in other takes. He also tells Lomax stories about writing lyrics while fixing a flat on his car, or walking down the road, giving some insight into the blues master’s creative process.

Waters later said he was proud of himself after hearing Lomax’s tapes because he’d never really heard his own voice, and was impressed with his performances. The experience gave him the confidence to move to Chicago and pursue a career in music.

David “Honeyboy” Edwards, who played with Robert Johnson, the “King of the Delta Blues,” as well as Muddy Waters’ mentor, Son House, and bluesman Willie Brown also were recorded in the Coahoma Study.

Besides Lomax’s work with blues singers, the recordings contain church music, field hollers, children’s game songs and oral histories, which was of interest to Fisk University’s John Wesley Work III, whose father and grandfather were pioneering scholars of African American music. Gospel was taking over black music culture at the time, after having being created mostly in the 1930s, but that wasn’t what the team wanted to hear.

“They had to sit people down and ask them to play the old stuff,” Barretta said. “The music associated with slavery and its immediate aftermath, such as the spirituals, was rapidly fading from churches.”

The research team also paid close attention to what was on the local jukeboxes. The jukebox makers would keep tabs on which records were being played most, and which ones weren’t. They would use this information to figure out which ones to trash and which ones to keep.

One thing the Coahoma team found was that even though people often thought of Mississippi as backwards, by the 1940s, locals were mostly listening to the same records as the rest of America.

“They were listening to Fats Waller and pretty much what everybody else across the country was listening to,” Barretta said.

The study also includes tapes of children singing popular songs of the time, such as “Shortenin’ Bread,” among all the other kinds of music.

“There is a pretty wide range of sounds, which is a testament to the spirit and breadth of African American culture,” Barretta said.

Barretta is a great storyteller, and the podcast will teach listeners about a significant time and place in our nation’s history, said Jeffrey T. Jackson, Ole Miss chair and professor of sociology. He calls “Coahoma” a “remarkable achievement.”

“We in the Department of Sociology and Anthropology at UM are very excited that Scott has engaged in this collaboration with Delta State University and has created such a rich series exploring the music of Coahoma County, Mississippi in the early 1940s and, even more significantly, the social context in which that music was born,” Jackson said.

“This is sociology, history and – most importantly – music tied together in a fascinating way.”