Christiana Christodoulou decided to come to source to conduct her research 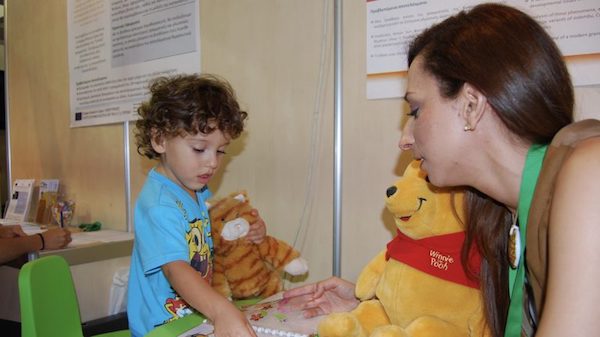 Christiana Christodoulou works with a participant in one of her language development research projects. Submitted photo

Thanks to a prestigious grant from an international research and innovation program, a visiting professor at the University of Mississippi is studying how children born learning the local varieties spoken in the state develop language.

In a project called “Linguistic Illusions,” Christiana Christodoulou is investigating language acquisition in children born with Down syndrome, children diagnosed with a language disorder and children not born with any linguistic or cognitive disability among those speaking Southern African American Vernacular English and Southern English.

“Given my research interests and after interacting with people in the area and their unique way of speaking, I became fascinated by the idea of studying the language development of children in Mississippi, in populations with both typical and atypical language development,” said Christodoulou, the Marie Sklodowska-Curie Global Fellow at the University of Cambridge and visiting research assistant professor at UM.

Christodoulou will share her progress and findings through workshops and lectures for the public and the academic community, as well as writing articles and giving interviews.

“We aim to eliminate false general beliefs or urban myths that these regional and demographic variations somehow reflect deficient or incomplete versions of Standard English because of some grammatical idiosyncrasies, such as omitting the verb ‘to be’ or using double negation,” she said.

The aim of the research is to find evidence that such particularities are part of the linguistic variety, rather than the product of incomplete or incorrect acquisition, knowledge or use of grammatical rules.

Additionally, researchers will be able to formulate a developmental trajectory for children with both typical and atypical language development, where they will “map” what abilities children in each group have at different ages.

“We will then be able to use this developmental trajectory as a guide to provide a speedier and more targeted analysis of the children’s linguistic abilities and the creation of better-informed diagnosis and intervention plans for speech and language therapy,” Christodoulou said.

“She is doing very important work, and we are thrilled to be a part of it,” he said. “Her arrival at UM coincides perfectly with the launch of our new Ph.D. program in second language studies, and we know that her presence in the department will add considerably to the scholarly discussions among faculty and students.”

Christodoulouwill be at Ole Miss until summer 2019, after which she will return to the University of Cambridge to complete her project. Selecting the site location for her study was an easy choice, she said.

“Given that my research concerns the language varieties spoken in the state of Mississippi and that I would need to collect data from 120 children, I needed to be in an institution located in the heart of the American South,” she said. “The fact that the University of Mississippi is an R1 institution and Mississippi’s flagship university made it an ideal place to host my research.”

Previously she was a post-doctoral research associate and affiliate at the Department of Brain and Cognitive Sciences and Department of Linguistics and Philosophy at the Massachusetts Institute of Technology and a post-doctoral research associate, heading another Marie-Curie grant awarded to her in 2012, as well as an instructor and research manager at the University of Cyprus.

The Marie Skłodowska-Curie Fellowship is a $300,000 award for 2017 through 2020. This project has received funding from the European Union’s Framework Programme for Research and Innovation Horizon 2020 (2014-2020) under the Marie Sklodowska-Curie Grant Agreement No. 749360.

For more about UM’s Department of Modern Languages, visit http://modernlanguages.olemiss.edu/.