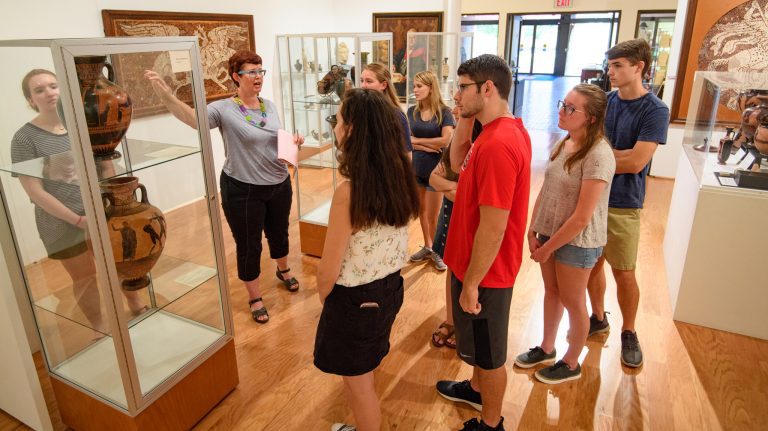 Educational programming has been an important part of the mission of the University of Mississippi Museum since its opening in August 1939. The museum is celebrating its 80th anniversary this month. Photo by Robert Jordan/Ole Miss Digital Imaging Services

From Vonnegut and O’Keefe to art lessons and lectures, landmark offers something for everyone

As a child in the 1940s, Kaye Bryant used to wander around what is now the University of Mississippi Museum. There, her imagination was captured by fleas, but these were not just any ordinary bugs – one was dressed in a tuxedo, the other in a wedding dress.

She couldn’t untangle the riddle of how someone was able to dress the tiny insects. Bryant, 81, of Oxford, still can’t wrap her head around it.

“I was absolutely enchanted,” Bryant said. “There wasn’t a lot going on for children in town at that time, but these fleas absolutely captivated my imagination.

“It got to the point to where when I would open the door, the director would see me coming and she would get the little stool and the magnifying glass because she knew where I was headed. I would go a back there and stare at those fleas forever trying to figure out how they got those clothes on them. My mind could not wrap itself around them being dressed.”

Though the flea exhibit is not currently on display, it was one of the many popular attractions offered at the museum, which this month is celebrating eight decades as a cultural hub of the Lafayette-Oxford-University community after being opened as the Oxford Art Center on Aug. 24, 1939.

The story of the museum begins with Kate Skipwith and Mary Skipwith Buie, two daughters of Horatio Skipwith, who moved his family to Oxford in 1869 after leaving New Orleans during the Civil War.

Mary Skipwith Buie took art lessons while growing up near the Ole Miss campus. She married Henry T. Buie, moved to Chicago and, in the late 1800s, worked for Anderson Galleries and also Marshall Fields, which later was acquired by Macy’s.

She used her skilled hand at Marshall Fields to paint miniatures and also copies of masterpieces such as the “Mona Lisa” and Jean Jacque Henner’s “Penitent Magdalene.” She lived out her later years back home in Oxford.

After Mary Buie died in 1937, her will specified that she wanted to a museum built in Oxford, with her property on University Avenue designated as the site for it. She also left $30,000 and her impressive art collection, including one of her “Mona Lisa” copies and a self-portrait, which hung in the vestibule.

Sister Kate Skipwith was executor of Mary’s will and made sure the vision for the museum came to life, also deeding her own lot to the city for the project. 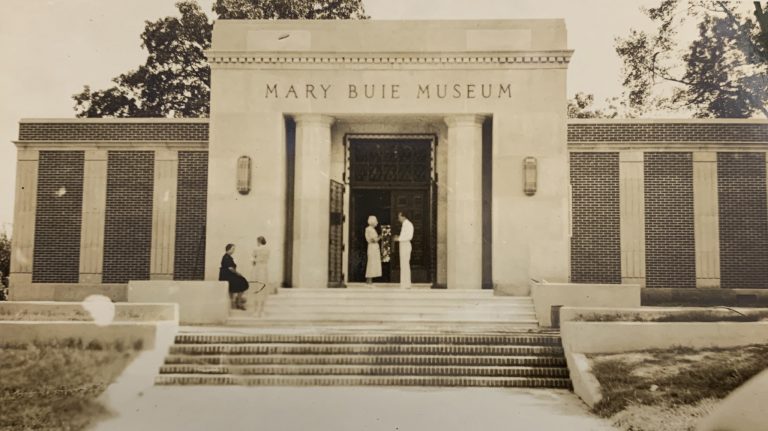 The museum project was bolstered by funding from the Works Project Administration, which established it as one of two federal arts centers in Mississippi. The city also provided funding, and the museum was dedicated as the Oxford Art Center but was called the Mary Buie Museum from 1942 to 1997. The city operated it for many years, but it was officially deeded to the university in 1974.

The museum project was bolstered by funding from the Works Project Administration, which established it as one of two federal arts centers in Mississippi. The city also provided funding, and the museum was dedicated as the Oxford Art Center but was called the Mary Buie Museum from 1942 to 1997. The city operated it for many years, but it was officially deeded to the university in 1974.

The UM Museum has expanded considerably during its 80-year history and continues to be a source of rich cultural experiences for the community just as Mary Buie dreamt it would be so long ago.

“The museum is excited and honored to celebrate the 80th anniversary of its 1939 founding,” said Robert Saarnio, its director. “The museum represents eight decades of acclaimed exhibitions, collections growth and educational programs offered to diverse audiences of all ages – enriching lives, inspiring creativity and expanding horizons through the power of art and world culture.”

The museum’s permanent collection includes paintings and other art objects, which belonged to the Skipwith family; displays of local and historical value; fine old costumes; and a number of brass and copper vessels of folk interest, among these a toddy cooler from the St. George Tucker estate in Williamsburg, Virginia, which bears a pewterer’s mark: London, 1633.

The museum is the home of the David M. Robinson Memorial Collection of Greek and Roman antiquities, one of the largest such collections in the country. It also has an etching of the city of Dresden colored in by the author Kurt Vonnegut, along with a Vonnegut sketch and letter to a friend, and a painting by Georgia O’Keefe.

There’s also some 500 scientific instruments from the 19th century, used by John Millington and Frederick A.P. Barnard to teach Ole Miss students before the Civil War, among other items.

The museum has offered art lessons in the community since 1941, and regularly hosts lectures by notable artists, conservators and historians. Even Faulkner’s mother took lessons at the museum, and the author drove her to them.

Children’s programming always has been an important part of the museum’s mission. More than 10,000 students from across north Mississippi learn art skills at the museum, or in classrooms around the region through the Traveling Trunk program.

The museum has hosted hundreds of exhibits, including displaying original sketches by Walt Disney for a few months in 1943. At the same time, there was an extensive exhibit of dolls, which was planned and arranged by girls in the city, giving them an opportunity to participate.

Bryant loved spending time at the museum when she was a child during the latter days of World War II. She often would cut through by the museum on her way home from school, and in the summers, she wandered around inside. She remembers being attracted to the marble building because it felt much cooler than most buildings in town on hot days before air conditioning was common.

The museum’s then-director, Rose Rowland, was a kind soul who would take time to show her interesting items and tell her the stories behind them.

“She would guide me around the museum and show me things,” Bryant remembers. “She would tell me about Ms. Kate’s (Skipwith) travels and the things she brought back. I found it all fascinating because I had never been anywhere.”

Bryant said her experiences at the museum as a young girl made an impression on her. She later served on the museum’s board and said she’s proud of its place in Oxford.

“The museum has been important to me all of my life,” Bryant said. “It was one of the few forms of entertainment we had. It has grown with the community, and now offers so much in terms of education and opportunity for us all.”

Jo Dale Mistilis also grew up in Oxford with Bryant and remembers going to the museum during its early years. The city didn’t have much entertainment for children in those days, except the Lyric and Ritz theaters, where kids could often go see a matinee – usually a western – on Saturdays, she said.

The university also offered a few summer programs for children.

“It was very unusual for a town this size to have a museum of this caliber,” Mistilis said. “It was very well-organized and gradually the museum just acquired more and more.

“It wasn’t far from my house, and it was easy to access and also safe and just plain fascinating.”

Mistilis loved dolls, and the museum had a large collection of them, which impressed her as a child in the 1940s. Like her friend Bryant, she also remembers Rowland being very kind to children who usually packed the museum.

“We all knew her and she was nice to us,” Mistilis said. “I am sure we were pretty noisy at times, but she just loved having children around.”

These days, Mistilis is a fan of Glenray Tutor’s photorealistic paintings, some of which hang in the museum as part of the Seymour Lawrence Collection of American Art. She attended an event at the museum where Tutor discussed his artistic vision, which was a treat, she said. She attends other artists’ lectures there and finds them extremely enriching.

She and her husband, Angelo, have long been supporters of the museum and she has often taken guests from out-of-town there.

“The museum is and has always been one of our community’s greatest assets,” Mistilis said.

Moving forward, the museum’s leadership and supporters are excited to usher in a new era, Saarnio said. The UM Museum will continue to serve the community for generations to come.

“We eagerly look forward to serving our public and campus communities in the decades ahead, informed by our appreciation of the civic meaningfulness of being stewards and presenters of art, artifacts and antiquities for public benefit,” Saarnio said.

“And we very sincerely thank everyone for their participation and goodwill over these many years, and for the university’s guidance and support of our mission.”