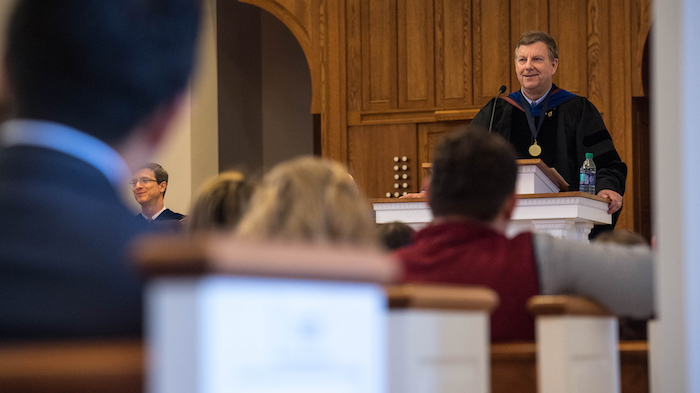 Donald Dyer, associate dean for Faculty and Academic Affairs in the College of Liberal Arts, and professor of Russian and linguistics, was named a Distinguished Professor at the University of Mississippi. Photo by Kevin Bain/Ole Miss Communications

Three University of Mississippi faculty members were appointed as Distinguished Professors during the spring faculty meeting Friday (May 11) in Fulton Chapel.

The Distinguished Professor is a new designation that recognizes the best faculty with sustained excellence at UM. The award was created in response to the university’s strategic initiative to develop a post-professorial recognition.

“This is an outstanding way for us to properly acknowledge the value of excellence and the contributions made by these faculty members to their disciplines and our community of scholars.”

He served as chair of the Department of Modern Languages from 2005 to 2017 and was awarded the 2017 Thomas F. Frist Sr. Student Service Award, which recognizes a faculty member for going the extra mile in unwavering dedication and service to students. He is the editor of Balkanistica, a peer-reviewed journal of Balkan studies.

He has served as co-director of the Chinese Language Flagship Program since 2005 and has taught classes such as Freshman Honors II in the Sally McDonnell Barksdale Honors College and topics in linguistics. His teaching and research interests include Slavic and Balkan linguistics and language in contact.

“Dr. Dyer has made a significant positive impact at the University of Mississippi over the past three decades, all the while making a name for himself as one of the most distinguished scholars in his field. His work is creative, impactful and has a wide range of influence.”

“Effusive praise of his work comes from the Department of Modern Languages and across the nation, and it rings loudly throughout the international scholarly community,” wrote Daniel O’Sullivan, UM chair and professor of modern languages, in his letter of support. 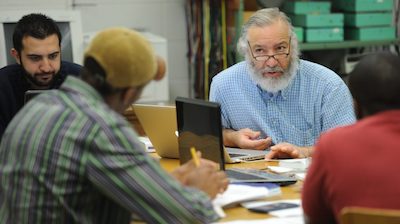 John Daigle, director of the Center for Wireless Communications and professor of electrical engineering, is one of three University of Mississippi faculty members appointed as a Distinguished Professor. Photo by Robert Jordan/Ole Miss Communications

He was named as an Erskine fellow by the University of Canterbury in New Zealand in 2009, was the 2004 recipient of the Institute of Electrical and Electronics Engineers Communications Society Technical Committee on Computer Communications Outstanding Service Award and was named an Institute of Electrical and Electronics Engineers fellow in 1993.

A professor who has recently taught undergraduate and graduate classes such as local area networks and applied probability modeling, Daigle conducts research into the analysis and design of communication networks and systems.

“Professor John Daigle has an illustrious career that spans more than 46 years, primarily in academia, but also some years in military and high-tech companies,” wrote Ramanarayanan “Vish” Viswanathan, chair and professor of electrical engineering, in his letter of support to Daigle’s appointment. “Professor Daigle has an exemplary research record and has contributed strongly in teaching, student mentorship and service to (his) profession and the university.

“John holds (a) cherished conviction that a student should graduate from the school with sound fundamentals. He also believes that a strong learning ability need not necessarily be gifted at birth or developed in early childhood, but can be acquired through hard work and perseverance. Hence, he advocates greater access to college education and at the same time upholding rigorous requirements for graduation.” 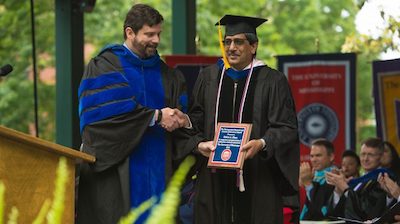 Ikhlas A. Khan, director of the National Center for Natural Products Research and professor of pharmacognosy, has been appointed as a Distinguished Professor at UM. Photo by Kevin Bain/Ole Miss Communications

He also serves as coordinator for Natural Products Research in the Center for Water and Wetland Resources, among other academic and research appointments.

In 2016 Khan received the UM Distinguished Research and Creative Achievement Award, and in 2002 he was awarded the UM School of Pharmacy Faculty Research Award. He is a fellow in the American Institute of Chemists and the Royal Society of Chemistry, and is a member of the American Chemical Society.

His research interests include efforts related to medicinal plants, drug discovery and applications of analytical tools in evaluation of quality and safety of dietary supplements.

“Dr. Khan’s career at UM is consistent with the expectations of a Distinguished Professor appointment,” wrote Kristie Willett, chair of the Department of BioMolecular Sciences and professor of pharmacology and environmental toxicology. “He in fact has ‘exemplary accomplishments in research’ and potentially unprecedented amongst UM faculty ‘international recognition in his field.’

“His research productivity and service to the field of pharmacognosy as measured by publications, invited presentations, editorial and advisory boards and international awards are outstanding. Furthermore, he has provided mentorship to nearly 40 graduate students in our department over his career.”

The three professors were officially recognized during the spring faculty meeting.

No more than 5 percent of eligible faculty can be appointed as a Distinguished Professor. Each school and college has their own guidelines for nominating their faculty, but the university requires that nominated faculty have at least six years of service at the highest rank of professor, along with exemplary accomplishments in research and creative achievement, teaching and service.

Also, it is expected that awardees will have achieved a significant degree of national or international recognition.

The recommended appointments are made by a committee of faculty chosen by the Faculty Senate and the provost, and the committee has representatives from across campus.