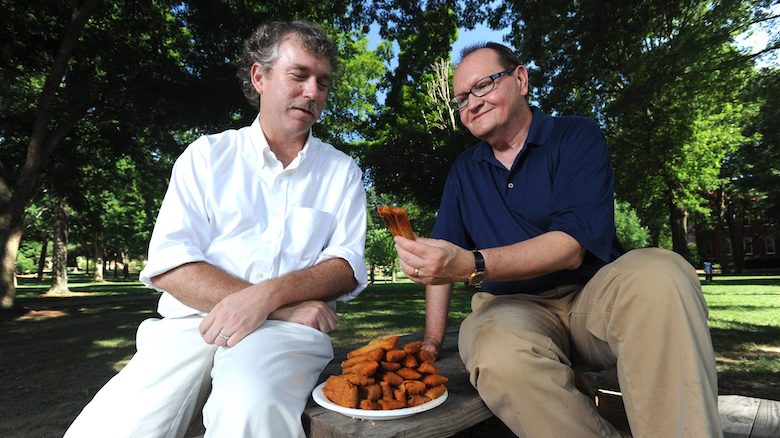 Ted Ownby (left) and Charles Reagan Wilson, discuss Southern culture while enjoying some tamales in the Grove at the University of Mississippi. Both men previously served as director at the university’s Center for the Study of Southern Culture. Photo by Kevin Bain/Ole Miss Digital Imaging Services

Whether it’s using the phrase “y’all,” showing regional hospitality or preparing and enjoying specialty foods and beverages, most Mississippians think they know what it means to be a Southerner.

But according to a University of Mississippi expert on the subject, there’s more to truly being “from the South” than living below the Mason-Dixon Line, familiar dialects and favorite dishes.

“When we study the South, we’re looking at multiple narratives and stories,” said Ted H. Ownby, William F. Winter Professor of History and former director of the UM Center for the Study of Southern Culture.

“While there are dominant stories rooted in the past, there have also been lots of ‘new Souths’ as well. It’s vitally important not to limit oneself to the one or two most familiar stories.”

As an example, Ownby offered his take on traditional Southern cuisine.

“Usually, staples like fried chicken, barbecue and a host of other foods not considered healthy are thought of as being authentic ‘Southern’ cooking,” he said. “However, many, if not more, people prefer unseasoned fresh foods, yet consider their tastes as ‘Southern,’ too. It’s equally important that there are lots of new food options, especially those brought by immigrants in the past generation.

“My point is that there are really no essentials when it comes to Southern dining experiences.”

Defining what is Southern requires awareness of the intersections of numerous perspectives that are themselves constantly changing, said Ownby, who contributed articles to the 24-volume New Encyclopedia of Southern Culture and co-edited the Mississippi Encyclopedia.

“For some, the South means living in a rural region among uneducated, poorer people who attend certain churches and cling to certain political views,” he said. “Any one of these things may be true, but there are far more stories in the South than just that one familiar troupe.”

While acknowledging there are variations on the definition of what it means to be Southern, Ownby pointed out that many things that originated in the South have expanded far beyond the region.

“Take Coca-Cola, for example,” he said. “The soft drink began as a cold medication that contained caffeine. Cigarettes started in the South. Walmart? Started in Arkansas as a department store with low prices for people with limited incomes. All of these things and more owe their origins to the South.”

Surprisingly, something that is so well-known for being Southern didn’t originate here: hospitality.

“As best we can tell, the concept of hospitality began in Europe somewhere around the 15th and 16th centuries,” Ownby said. “People traveling from place to place would inquire from locals if they could temporarily lodge in their homes. Such stays were often extended and included room, board and amenities.”

At some point, the custom of hospitality moved across the Atlantic Ocean and came to be associated with people who are polite, courteous and use good manners.

For some people, one of the most difficult things is to recognize the importance of suffering and struggle in the meaning of the South, Ownby said.

“Whether the subject is food and music or political and economic issues, it’s easy enough to find images of the South that might seem innocent or amusing,” he said. “It’s important to keep asking questions about where those images come from, or how people might think about them.”

Whether one was born and raised in the South – Ownby is originally from Tennessee – or moved from somewhere else to the region, the scholar said it’s essential to keep learning.

“Don’t assume that there’s only one perspective on the subject,” he said. “Let’s all encourage conversations about the South on lots of different topics on different levels.

“If fiction is important to you, read things called ‘Southern fiction,’ but also read things written about the South by travelers, newcomers to the region and critics. Remember, there’s no one way to be Southern.”