UM Undergraduate Students Present Their Research at the Capitol

Posters in the Rotunda showcases undergraduate projects at state universities 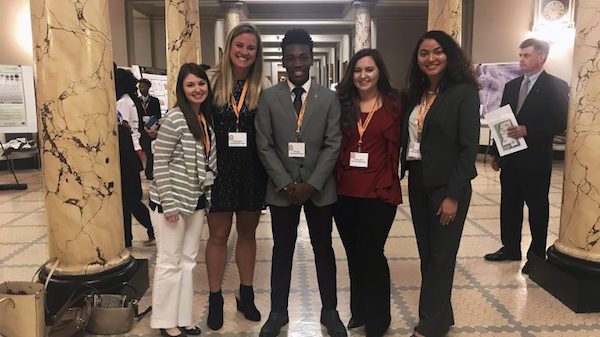 Five University of Mississippi students displayed their undergraduate research on topics ranging from the Latino South to therapeutic treatments for cognitive disorders during Posters in the Rotunda Tuesday (March 20) at the Mississippi State Capitol.

“Research experiences at the undergraduate level can be extremely impactful for our students, giving them the first thrill of defining and answering a question no one else ever has,” said Josh Gladden, UM interim vice chancellor of research and sponsored programs. “We have been expanding these experiential opportunities at UM and are excited for this opportunity for our leaders to learn more about the impressive work being produced by our students throughout the state.”

The event provided opportunities for state leaders to visit with students from their districts, allowed students to network with one other and showcased cutting-edge research conducted by undergraduates that benefits Mississippians.

“The work being done by undergraduates with their mentors at the eight state universities is quite impressive,” said Marie Danforth, chair of the steering committee for the Drapeau Center for Undergraduate Research at the University of Southern Mississippi and coordinator of the event, in a news release. “This event (helps) legislators appreciate the contributions that the students are making to the state in so many areas, including economics, health care and education.”

Ole Miss students presenting at the Posters in the Rotunda event were:

– Brittany Brown, a journalism major from Quitman. “The Latino South: Migration, Identity and Foodways” was the title of Brown’s poster abstract. According to Brown, her research “examines the demographic changes that result from the migration of Latinos to nontraditional settings in the American South.”

“It is important to understand how this increasing population will affect the idea of race and how Southern society views people of Hispanic descent in order to move forward as a region,” she wrote in her poster abstract.

– Abigail Garrett, a mathematics and computer science major from Mountain Brook, Alabama. Garrett’s research involves analyzing and sorting data with the mission of giving others “the ability to easily view and understand vast amounts of data provided about breast cancer patients and their treatments,” she wrote in her poster abstract.

“The research seeks to benefit Mississippi by helping its residents who are affected by breast cancer, and also benefit the University of Mississippi Medical Center’s research in regard to this terrible disease.”

– Cellas Hayes, a classics and biology major from Lena. As life expectancy has increased, so has diseases such as Alzheimer’s disease and other dementias, Hayes wrote in his poster abstract. The purpose of his research is to “identify therapeutic treatments for these diseases.”

“Within the last 50 years, life expectancy in Mississippi has increased to almost 80 years of age,” he wrote in his poster abstract. “This increased life expectancy has come with more age-related problems such as increased rates of dementia. Our goal is to understand how cognitive disorders come about in order to find potential therapeutic treatments.”

– Lindsey Miller, a pre-pharmacy major from Corinth. Miller’s poster abstract was titled “Finding the Dimerization Interface of Skp1 from Dictyostelium.” The research is focused “on understanding the function of F-box proteins, which are key proteins in regulating a wide variety of cellular activities in organisms including humans, plants and fungi.”

“Dictyostelium is an amoeba that lives in soil and is a good model system for studying how cells react to their environment,” she wrote in her poster abstract. “We are studying the Skp1 protein from this amoeba to understand how it works with other proteins. This information may help advance medicine and agriculture in Mississippi.”

Started in 2016 and modeled after the Posters on the Hill event at the U.S. Capitol in Washington, D.C., which includes students from around the country, Posters in the Rotunda is held in some format in 17 states.

Both chambers of the Mississippi Legislature proclaimed March 20 as Undergraduate Research Day.

“Outstanding students from across the state have dedicated their time and have worked tremendously hard on their research projects for Posters in the Rotunda, and these students demonstrate the positive impact that higher education appropriation brings to our state, and supporting students who participate in Posters in the Rotunda is an excellent way for Mississippi to invest in its future,” House Resolution No. 54 stated.

“Undergraduate research is critical in developing solutions to the needs of Mississippi’s future workforce because it cultivates the students’ goals and aspirations and it encourages students to specialize in the biomedical and (science, technology, engineering and mathematical) fields after graduation.”